Athletes village could showcase green energy system to the world
Sep 1, 2006 1:25 AM By: Alison Taylor 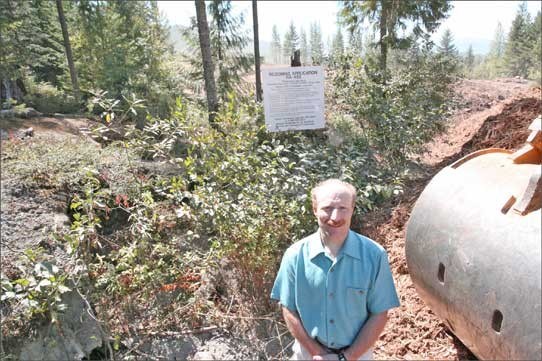 One man’s waste could be keeping another man warm at Whistler’s Olympic athletes’ village.

Municipal engineers are looking to transform the waste in the landfill and the sewage treatment plant into green energy for the legacy village.

While that may sound dirty, it could be one of the cleanest, and most sustainable, ways to heat the Olympic village, which will become employee housing units after the 2010 Games.

"We’ve done buildings with alternative energy systems before but when we’re doing a whole neighbourhood like this, it allows us, through the economies of scale, to go to a whole different level of engineering opportunities," said Brian Barnett, general manager of engineering and public works at the resort municipality.

With a carte blanche to build a brand new neighbourhood from scratch, engineers are investigating the possibilities of taking the warmth from the resort’s effluent and the methane gas from the now decommissioned landfill and transforming it into heat for the new village.

All Whistler has to do is capture it.

If it moves ahead the athletes’ village could be a model sustainable community for the world to see in 2010.

The foundation of this potential green energy system would lie in the ground underneath, in the form of a district energy system. That system is a series of pipes, which carries warm water to the buildings, which in turn heats the homes.

"To make it really exciting is you use a green energy source to heat the (district energy) loop so that’s when it becomes a bit of magic," said Barnett.

In this case, the source is the warm effluent from the nearby sewage treatment plant.

The effluent would go through a heat exchanger and the thermal energy in the sewage would be transferred to water or another fluid and pumped through the district energy system.

To Barnett that is the very essence of a sustainable system, using waste heat from the sewage system to heat homes.

And that’s music to the ears of Ian Bruce, climate change specialist with the David Suzuki Foundation, because it means the village won’t be contributing to climate change by burning more fossil fuels.

"That’s a fantastic use of changing the way we use energy and this is groundbreaking in the sense that we’re displacing the need to burn, for example, fossil fuels such as natural gas and so it has numerous long term benefits for the environment and economically," he said.

It works so well because the sewage treatment plant lies in close proximity to the athletes’ village. Also nearby is the decommissioned landfill, seeping methane gas. The former landfill is Whistler’s largest single source of greenhouse gas emissions. Methane produces 21 times more GHG emissions than does carbon dioxide.

Collecting methane and burning it, which will produce carbon dioxide, is better than just leaving the methane to vent into the atmosphere. The municipality was always planning on using a flaring system to convert the gas.

But there is more potential there than just burning it. By building a co-generation facility, the burning gas could generate both heat and electricity for the village.

There’s a finite amount of methane gas. Barnett said they estimate about 15 years production. But even with that short lifespan it’s worth it. The system will pay for itself after a few years.

"We’re only looking at a few years of payback so 15 years is great," he said.

The same sort of payback holds true of the effluent system.

A joint engineering study, funded by Terasen and the resort municipality, shows that it is both technically and economically feasible to build the green project.

Terasen’s director of corporate development, Dietz Kellmann, admits that normally sustainable energy projects are more expensive than traditional energy because of the high capital costs. But the numbers for the athletes’ village seem within range.

"The way the numbers look right now is the cost of the energy delivered to the athletes’ village will actually be competitive with the cost of electricity," said Kellmann.

That’s due to a number of factors. The Olympic village is a "greenfield" site, with no development on it. That means the pipes for the district energy system can be installed at the same time as other municipal services. In addition, the location of the village in the Lower Cheakamus, bordering the landfill and the sewage plant, sets the scene perfectly to take advantage of the energy.

Preliminary costs estimates for the first phase of the system, which would cover the development for the Olympics, are roughly $4 million. This is over and above the $130 million total athlete village project budget.

"It’s an opportunity that rarely presents itself because municipalities don’t typically do a large development like this so we never really had the option of taking a look at a system like this," said Barnett.

The city of Vancouver is also exploring ways of using heat from the sewage pipes to provide energy for the False Creek Olympic athletes’ village.

Tom Osdoba, manager of the city’s sustainability group, said the two systems are conceptually quite similar.

He said the worst case scenario business case would see the city recover the capital costs of the investment.

Bruce at the Suzuki Foundation praised the work from Whistler but urged the municipality to take a stronger leadership role in convincing the provincial and federal governments to show leadership in addressing climate change too.

But it is hoped the athletes’ village is just the first step in Whistler meeting its long-term sustainable energy goals. The vision for the future sees the different nodes in the existing Whistler Village with mini district energy systems using ground source heat pumps.