Wildfire Protection Strategy aims to avert disaster before it strikes 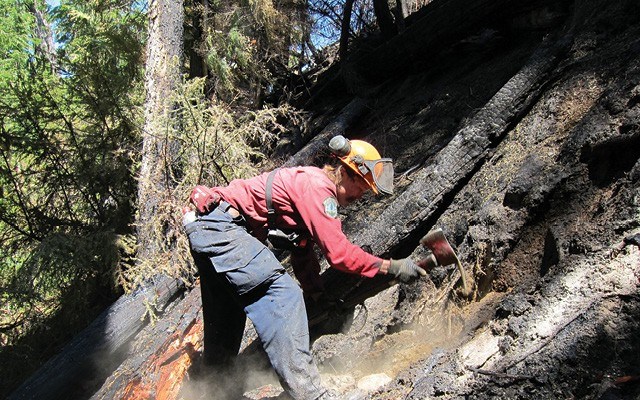 PREVENTION EFFORTS The Resort Municipality of Whistler is looking to ramp up fuel thinning and wildfire protection work in the coming years. PHOTO courtesy of the bc wildfire service

The Resort Municipality of Whistler (RMOW) is taking more steps to protect the community from wildfire.

The strategy identifies about 4,000 hectares of high-hazard land in municipal boundaries and about 1,200 hectares of priority-treatment areas (high-hazard areas located within 500 metres of structures in developed areas).

Another 1,500 hectares or so — both north and south of Whistler — have been identified as high-priority areas to cut strategic fuel break systems into the forest.

The RMOW has done fire prevention work such as fuel thinning in the past, but it was a fire in the Elaho Valley southwest of Whistler in the summer of 2015 that increased the urgency of the situation, said Mayor Nancy Wilhelm-Morden.

"I woke up one morning and saw what I thought was fog in July, and it wasn't fog, it was smoke," she said.

"It was at that time that, really, you didn't have to convince anybody else that we had a very real hazard, we're at risk, and then seeing what happened to Fort McMurray (last summer) just sealed the deal."

But protecting Whistler from a similar fate won't come cheap.

The WPS lays out options for two budgets — one at a 10-year cost of just over $16 million, another at just over $30 million.

The preferred budget option in the WPS ($16 million over 10 years) is based on completing 30 hectares of thinning projects per year, along with 40 hectares of fuel breaks (the RMOW is currently averaging eight to 15 and five to 10 per year, respectively).

The preferred budget option will only complete about 25 per cent of the identified priority areas within 10 years.

There are provincial funding programs to help ease the pressure — like the Union of BC Municipalities' (UBCM) Strategic Wildfire Prevention Initiative (through which the RMOW is eligible to receive up to $400,000 per year for a maximum grant of $20,000 per hectare) and the newly formed Provincial Forest Enhancement Society — but there's no guarantee that this funding will come through.

If it doesn't, the recommended projects, scale and timeline in the WPS will need to be revisited.

"If they're available, great, if they're not, we're going to have to reconsider where we go next," Wilhelm-Morden said.

"We've got billions of dollars of assets here, and we have to take the steps to protect those assets."

To help bring down costs, the WPS recommends optimizing staff and resources, as well as talking to other organizations involved in land management like Whistler Blackcomb (WB).

Supported by provincial funding, the RMOW has done a number of fuel thinning projects within the WB land base, and will look to increase the mountain operator's role in wildfire management moving forward.

"They're doing a very good job with keeping snowmaking equipment out there so that it's ready to go for water if a fire is started, but now we'll be talking with all of our partners about mutual efforts," the mayor said.

After a presentation from staff, Coun. Sue Maxwell asked to what degree the proposed actions would reduce Whistler's risk.

"If we're going before the public with a budget... for the money that we may or may not spend, how does this help us, and what position does this put us in versus where we're at today?" she asked.

The effect is hard to quantify in terms of percentages, said environmental stewardship manager Heather Beresford.

"The areas where we're doing the work are all rated high or extreme, and after we've done the thinning it drops it down to moderate," Beresford said.

"That is what the UBCM wants to see — if you're taking it down to at least that risk level they feel that it's money well spent on their part."

"We are (at extreme risk) for a number of weeks of the year, and that period seems to be extending as the decades roll on," he said.

"When we have a high hazard our risks are far more extreme than you would find say in the Okanagan or California."

The WPS includes a proposed action plan for the next two years that outlines 17 actions that the RMOW can take in the short term, which range from securing funding to getting the right personnel in place for fuel management.

Council also approved an application to the UBCM 2017 FireSmart Grant Program at the Jan. 24 meeting for $10,000.

If successful, the money will be used to hire a FireSmart coordinator to help homeowners decrease risk on their properties.