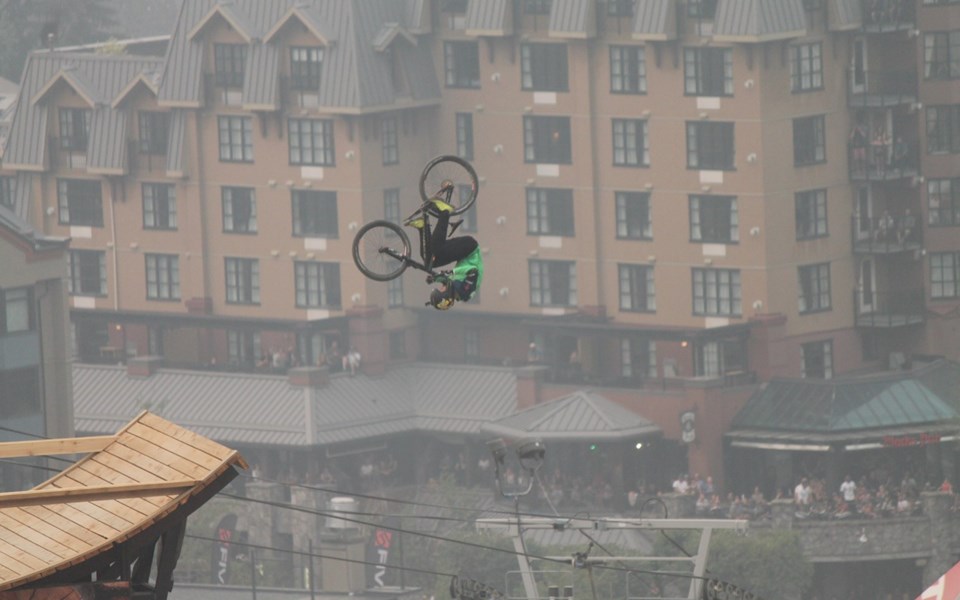 HOLD YOUR BREATH The Red Bull Joyride event at last year's Crankworx took place under cover of smoke—but that didn't deter about 35,000 people from coming out to watch it. File photo by Dan Falloon

The 2019 wildfire season has been kind to Whistler so far (knock on wood)—with no fires on the doorstep or smoky skies impacting enjoyment of the outdoors—but after back-to-back, record-breaking fire seasons, the issue is never far from the minds of local tourism stakeholders.

"It's always going to be on our radar because of what we've experienced," said Karen Goodwin, VP of destination and market development for Tourism Whistler (TW).

"And we're concerned, but if you look at the pace of bookings right now, August, for example, is pacing to be the best August we've had, ever, in terms of room nights.

"So it's not translating to deter people from booking at this point. The summer is pacing well."

One concern for local stakeholders is the media headlines that accompany such wildfire seasons, which can negatively affect the perceptions of potential visitors.

"When people see smoke outside their window, they assume it's everywhere," said Saad Hasan, chair of the Hotel Association of Whistler.

"They don't think that maybe Whistler is not affected ... if they have heard through the grapevine that there is smoke, they will just not travel."

When fires are getting out of hand in other parts of the province, communication and engagement becomes "exceptionally important," Hasan said.

"The best we can do is to have the accurate messaging out there as to what is happening here in the resort," he said.

It's something that must be dealt with as it happens, Hasan added, pointing to the favourable weather conditions Whistler has enjoyed so far this year, and another "exceptionally successful" Canada Day in the resort.

"All in all, things have been working in our favour, but it can change very quickly," he said.

"And when that happens, that's when our communication team is always ready to stay ahead of the messaging."

For Whistler Blackcomb, wildfire is considered the "No. 1 external threat" in the summer, said communications director Marc Riddell.

"From an operational perspective, we're always concerned by it, not just for the safety of our guests, but the way it impacts the experience," Riddell said.

"But it's not something we can prepare for, so we monitor it on a day-to-day, month-to-month basis, to see how it impacts our operations."

While there has been anecdotal evidence of the impact of wildfire smoke on tourism locally in recent years—such as cancelled sightseeing flights or outdoor activities—stakeholders say there has been no noticeable impact on the resort's bottom line.

Goodwin noted that occupancy has stayed strong during smoke events, while Riddell pointed to the approximately 35,000 people who came out to watch Red Bull Joyride during Crankworx last year.

"That was at kind of the peak smoke period that we experienced last summer," he said.

"So it hasn't really had an impact on the overall business. People still want to come and enjoy it."

With wildfires a threat that is seemingly here to stay, how will tourism fare in the long term?

"I think key to minimizing the impacts on tourism is to make sure our locals, member businesses and visitors have all the facts and the latest information from those official sources, so they're informed and all on the same page," Goodwin said.

"And we'd like to avoid some of those international headlines like 'B.C. is Burning.' I know California suffered from the same thing last year—it sounded like the entire state was on fire.

"It doesn't bode well for that international traveller who is not as well versed on our diverse geography and exactly how far away a fire in northern B.C. might be to Whistler."

Residents and visitors are reminded to report all fires in Whistler immediately by dialing 911. Fires outside of Whistler should be reported to the BC Wildfire Service at 1-800-663-5555 or *5555 toll-free on most cell networks.

Stay up to date on the local wildfire situation at www.bcwildfire.ca.