Complaint stems from officer's handling of a sow bear that was killed in a fall after being tranquilized on Oct. 8
Oct 26, 2018 6:40 AM By: Brandon Barrett 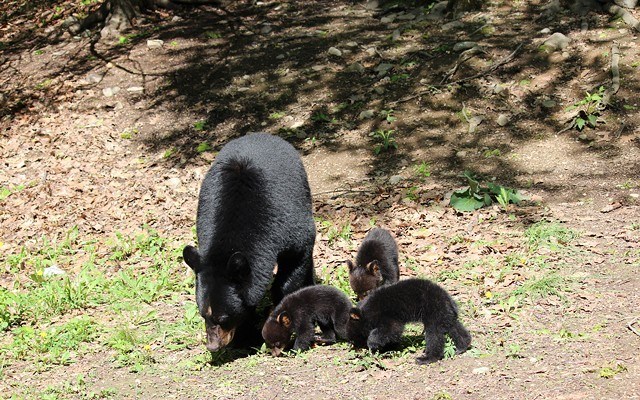 Wildlife advocacy group The Fur-Bearers has filed a formal complaint over the Conservation Officer Service's handling of a sow bear, not the one pictured, that died on Oct. 8 after an officer tranquilized and treed the animal. www.shutterstock.com

A wildlife advocacy group has filed a formal complaint against the Conservation Officer Service (COS) over its handling of a sow bear that died in a fall from a tree this month after being tranquilized by an officer.

On Monday, Oct. 8, .the COS responded to a sow bear and her three cubs that had reportedly been accessing berries from several mountain ash trees in a residential area of Creekside. In an effort to relocate the bears a short distance away, the officer on the scene tranquilized the sow, which subsequently climbed a tall tree and then fell to her death.

Stemming from an Oct. 11 article in Pique, North Vancouver-based non-profit The Fur-Bearers officially filed its complaint to the COS this week.

Executive director Lesley Fox said the Fur-Bearers are calling for a general order to be instituted requiring all conservation officers carry a safety net for treed animals or to remain onsite to wait for the animal to descend from the tree and be removed from the area with non-lethal measures. It also asks that all COS vehicles be equipped with a safety net, or “at the very minimum each community should have access” to one.

Sgt. Simon Gravel said the local COS is in the process of obtaining a net that will be available for use by next bear season. ““There was not much on the market that we liked and could utilize,” Gravel noted in the days following the incident. “We’ve been looking into it for many, many years, and we just, finally, a few months ago, found a product that could be suitable for our officers to use. We have one on the go, it was ordered, and it will be here for the next season.”

The Fur-Bearers’ complaint also requests that a general order be implemented banning conservation officers from interfering with a sow bear with cubs of the year when they do not pose a threat to public safety or property, particularly between the months of October and May.

The complaint also requests that cubs be a minimum of 70 pounds (32 kilograms) before they are released into the wild without their mother. The COS decided not to relocate the cubs following the death of the sow on Oct. 8, based on the advice of a consulting provincial veterinarian. It’s unclear how much the cubs in question weigh.

“Statistically speaking, the survival rates are already low (for orphaned cubs),” Fox said in an interview. “There’s a lot of questions over whether they have the ability to den in the winter.”

Fox also questioned the seeming lack of accountability at the COS, and the complaint calls for the institution of a “third-party or independent oversight body with full public transparency for anytime an animal is injured or killed directly by or through the actions of an officer, with the authority to recommend policy changes and punitive actions,” according to the filing.

“One of the problems is that (the COS) has no independent oversight. They set the rules, and … if there’s any complaint, they investigate it themselves,” Fox said.

The COS is required to respond to formal complaints.