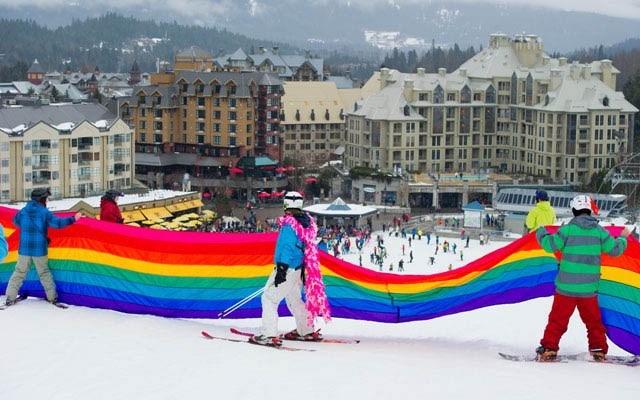 Comedian Coveted Whistler's long-running LGBT ski week is hopeful to secure municipal funding to attract a headlining comedian for the 23rd edition of the event in 2015. Photo by Mike Crane / Tourism Whistler

Dean Nelson is hoping the third time is the charm as his organization attempts to garner municipal-granted funds to expand the annual Whistler Pride and Ski Festival, previously known as WinterPRIDE.

Nelson, CEO and executive producer of the weeklong gay and lesbian ski and snowboard festival, applied recently for the third time in as many years for municipal Festivals, Events & Animation (FE&A) funding to help bring a big-name comedian to town for the winter festival.

"To help elevate the star power for both the LGBT and mainstream consumer," said Nelson. "Having the funding will help reduce the financial risk in bringing in a major star. It would... help us sell the concept to future sponsors that will want to be associated with the festival and the star. It would help drive midweek visits, which is the biggest growth opportunity for both the festival and the resort."

Nelson said he is "cautiously optimistic" the 2015 incarnation of the festival will get some of the $1.2 million of FE&A monies released by the Resort Municipality of Whistler at a council meeting earlier in August.

Ideally, Nelson would like to get the funds by early September to give the festival six months to work with resort partners to build "awareness, excitement and interest" in coming to the event, ahead of the Nov. 15 early bird booking window.

Sue Adams, chair of the FE&A Oversight Committee couldn't speak specifically to the Whistler Pride and Ski Festival funding request, but said the summer release of funds is meant to help events like it.

"One of the main reasons is so that we can engage programming for the winter season," she said.

"There is quite a focus now on animating winter as well as summer."

Adams said she had no idea when a decision would be made on what events will get the funds for 2015, but said the FE&A Working Group is currently preparing the recommendations that will come forward to her committee.

The majority of the FE&A funding is usually announced in January, after the Pride festival.

Nelson said because his request is currently being considered, he didn't want to reveal the exact amount he requested or the budget the 2015 festival, but said the figures are similar to last year.

"When RMOW awarded funding to Whistler Pride, in the middle of November, for a January event, we scrambled to try to secure the headline artists we wanted, but the lead time was too short as well, as even if we did secure an artist by mid-December, that would only give us three to four weeks to promote the show," he said.

When the festival couldn't secure an act in time, Nelson asked council if he could hold the money over for the 2015 event, but he was told he had to give the money back and reapply this summer.

The first year Nelson applied — for 2013 festival funding — the request was turned down without any reasons given, he recalled.

According to Tourism Whistler, Whistler Pride and Ski Festival is an important part of Whistler's events calendar.

"It's an event that highlights Whistler as the inclusive community that it is and also drives business to the resort," James Buttenshaw, Tourism Whistler's director of planning and partnerships, told Pique by email.

"It is difficult to comment on potential impact of a hypothetical "bigger act", as many factors would come into play, such as timing, dates and the appeal of the specific act, however, one could expect that additions to the programming would enhance the festival experience for participants and have the potential to increase the number of visitors," he said.

For festival regular Dave Keen, who has been involved with the festival as either an attendee or volunteer for at least the last 15 years, helping the festival gain more star power is a no-brainer.

"The whole Pride circuit has expanded worldwide — there are just so many places for people to go," he said.

"It comes back to competing with events across the globe. If Whistler wants to show that it is throwing a big party, like a really big party, I think [a big name] draws more people. ... That is the hook, and then once they are here and they see how much else we have to offer they say, 'Oh, well, next year we'll come back.'"

The 23rd Whistler Pride and Ski Festival takes place Jan. 24 to 31. For more information on the festival, go to www.gaywhistler.com.

— With files from Alison Taylor