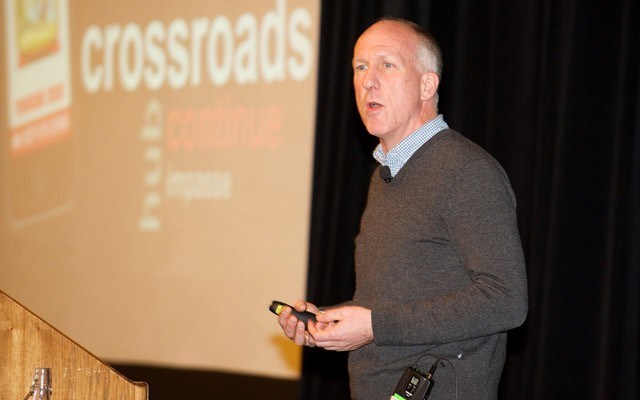 MAKING MORE OUT OF LESS Canadian Tourism Commission president Greg Klassen spoke to attendees of the Canada West Ski Areas Association spring conference in Whistler about making the most out of limited resources. Photo by David Buzzard / <a href="http://www.davidbuzard.com/">www.davidbuzard.com</a>

The Canadian Tourism Commission (CTC) may have stopped investing in the promotion of Canada's ski industry abroad several years ago, but that doesn't mean it's been forgotten.

Not by a long shot.

The CTC interim president and CEO Greg Klassen spoke to attendees of the Canada West Ski Areas Association (CWSAA) spring conference at the Fairmont Tuesday, May 12, and explained how, with continual cutbacks in funding from the federal government, the country's national tourism marketers had to come up with new ways to engage international customers considering their next ski vacation.

"As we've started to focus our investments on branding and selling Canada as an international tourist destination, we've really swayed away from focusing on niche, vertical markets like skiing," he said.

With the Conservatives tightening the purse strings, the CTC received $58 million in funding from Ottawa in 2013/14, down from $72 million the year prior, and $99 million in 2001/02. By comparison, the U.S. spends around $200 million a year in marketing itself around the world.

What the CTC has done, however, is put money into helping the sport of skiing grow in its 11 designated core markets, like South Korea, where the tourism commission committed $50,000 last year, and most notably, China, which received over $800,000 for ski tourism. That money helped open the Canada Ski Café in December at Nanshan Ski Village north of Beijing, giving Chinese visitors a taste of all that winter has to offer in the Great White North.

The move was a way for the CTC to leverage its investment to the fullest by creating Canadian brand ambassadors in a market that has seen the popularity of skiing explode over the last decade, with the number of Chinese skiers growing from just 10,000 in 2004 to over five million, according to Klassen.

"We've been bringing many of the (Chinese) ski instructors to Canada to train them and teach them to communicate with their well-heeled customers back in China to consider that ski vacation in Canada," he said.

"In our emerging markets, many of whom are learning to ski, many of whom find that alignment with the ski industry is a really prestigious way of demonstrating that they are important and that they have money because skiing is becoming one of those very luxurious products and experiences people like to have," he said.

Both Tourism Whistler and the CWSAA have been vocal in the past about the need for more tourism funding from the federal government. Barrett Fisher, president and CEO of Tourism Whistler, even helped organize a high-level meeting in early 2013 with representatives from senior and local levels of government in attendance, as well as national tourism leaders, to look at potential alternatives to federal funding. One suggestion discussed was to take a portion of unused visitor tax rebates and applying those funds towards CTC's marketing efforts, or implementing a tiered airport levy tax, an option that was opposed by the CWSAA.

Klassen explained how, by using the CTC's marketing platform, "Keep Exploring," with its strong focus on social media, other tourism providers could align with Canada's national brand to attract visitors.

"What we feel we can do is optimize our collective resources and assets. Just like we only use 10 per cent of our brain, we think we're only using 10 per cent of our assets," he said. "We can create platforms that act as co-op funding and directly invest in plans and markets that have the highest potential."