Council to consider TCUP application next Tuesday
Oct 16, 2009 7:45 AM By: Alison Taylor 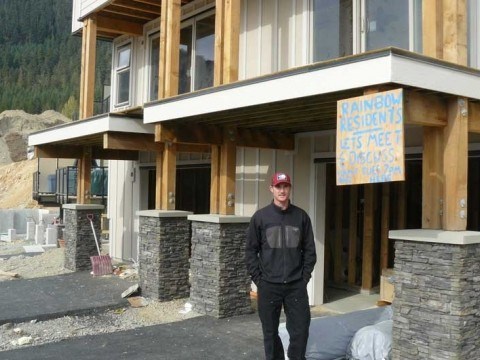 Andrew Haig would have not have bought a home at Rainbow had he known about the 1,600 strong security force possibly camping out there during the Olympics.

He would, instead, have waited until after the 2010 Games had come and gone.

That's how concerned he is about the potential disruptions from the temporary work camp that's set to be built just down the road from his new duplex.

"I can foresee it becoming party central of Whistler-north if these people are just here to work their shift and then enjoy the Games," said Haig, who will be moving into his new home next month with his partner who is expecting their first child.

The 11 th hour application for a Temporary Commercial Use Permit (TCUP) for a work camp on the Rainbow lands was submitted to municipal hall two weeks ago. Contemporary Security Canada, the consortium responsible for the private security during the Olympics, has just four months to get the camp ready for the February Games.

The application details a temporary housing complex with several buildings on the south end of the Rainbow subdivision, along with a dining hall/entertainment building.

Rod Nadeau, developer of the Rainbow lands, said the temporary development is far enough away from neighbours that he does not expect it will have significant impact.

"I am sure the disruption caused by this camp will be a lot less than the disruption we're causing them right now (with ongoing construction)," said Nadeau.

"These people are going to be working long hard shifts," he said of the security personnel needed for the Games.

"Even if they partied as loud as they possibly could, they're so far away from the other people that it's negligible.

Council will decide the fate of the TCUP application on Tuesday.

"Essentially what we have to consider is the balance of the negative impacts that might be perceived by local residents against our commitment to support the Games and help the logistics and the operation go ahead," said Mayor Ken Melamed.

Like other TCUPs before it, council could ask for certain requirements that may alleviate neighbours' concerns. For example, it could ask for noise controls or an on site supervisor to oversee activity.

The application's tight timeframe, along with the long weekend, left Haig scrambling this week to organize Rainbow residents in an effort to bring their concerns to council.

He spray-painted a sign encouraging residents to gather on Tuesday night to air their concerns and posted it outside his house. Construction personnel removed the sign.

The mayor recognizes the tight timeframe puts added pressure on the situation. Even he hasn't had a chance to look at the proposal in any detail after just reading about the application in the paper last week.

"It's not our preference that people have left this for so late," he said.

He stressed, however, that council and staff, despite the compressed timeframe, will do their due diligence when processing the application.

"There is a level of oversight and due diligence that will be applied to everything," said the mayor. "At the same time we are, to some degree, relaxing our processes to accommodate the Games."

He has heard about some of the neighbours' concerns along with Pemberton's concerns. The village had paved the way for a security camp in its industrial park and was, to some extent, relying on the influx of 1,600 workers in town to generate some business activity and a buzz of Olympic excitement.

"I don't think we can make the decision based on the economic inputs to one community or another."

The Rainbow site is ideal, said Nadeau, not only because of its proximity to Whistler but also because it's fully serviced with sewer, water and hydro.

Rainbow will get some rent for the camp, which will help the developers who have faced challenges building the new neighbourhood in the thick of a global recession.

And, Nadeau said, providing this space is a way of helping the 2010 Games.

"The Olympics are coming... We may as well do our best job possible to accommodate them," he said.

Haig wants to be clear about his support for the Olympics too. He is housing two volunteers in his new Rainbow home during the Games.

But this temporary development will have impacts. Not only noise impacts but traffic impacts too. Haig's new home is close to the entrance to the subdivision where all traffic must come through.

"The biggest concern I have is we don't have enough information right now," said Haig.

Until his questions are answered, he will continue to voice his opposition. He said he is not alone in his concerns. Other neighbours share them too.

Nadeau said as the information comes to the Rainbow developers, they will e-mail it out to everyone who has purchased.

Haig is planning on attending Tuesday's council meeting for the decision on the temporary camp.