Conservationist calls it 'textbook example' of Resort Municipality of Whistler prioritizing infrastructure over wildlife
Oct 3, 2019 12:00 AM By: Brandon Barrett 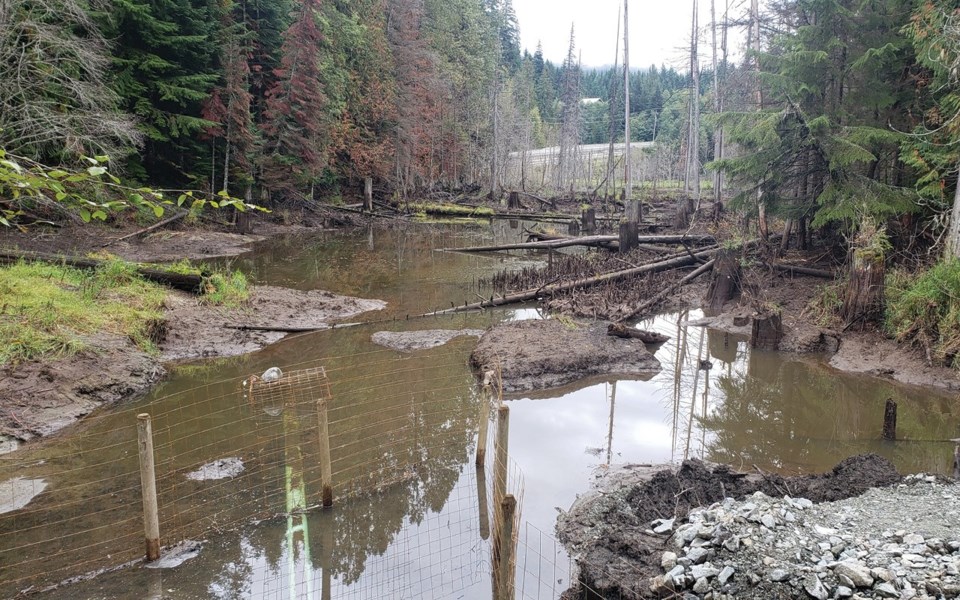 GIVE A DAM The Resort Municipality of Whistler recently removed one of two beaver dams from a pond in Alta Vista to prevent water damage on Hillcrest Drive—a move that drew criticism from local conservationist Bob Brett. Photo submitted

Recent work by the Resort Municipality of Whistler (RMOW) to prevent damage to a road in Alta Vista, which resulted in the removal of a beaver dam from a nearby pond, is "a textbook example" of the RMOW putting infrastructure over wildlife habitat, according to a longtime local conservationist.

Last month, the municipality began work in the neighbourhood to ensure the integrity of the road on Hillcrest Drive after a beaver dam had caused the water of the pond to rise "to a level that it was seeping underneath the road," which was "at risk of failure," explained Whistler Mayor Jack Crompton.

As a result, the RMOW removed one of two beaver dams at the site and drained approximately 1.5 metres from the secondary pond. The RMOW confirmed staff has observed "fresh beaver activity" at the pond since the work was completed.

Dave Williamson, principal at Cascade Environmental Resource Group, the firm contracted by the municipality to deal with the issue, said the removal of beaver habitat was done as a last resort after previous mitigation efforts had failed.

"I think it was necessary. We're talking about, basically, protecting infrastructure. You can't put the sewer line at risk," he said, referring to Whistler's main sewer line, which runs under the road.

Beavers have been an "on-and-off problem for years" at the site, Williamson said, noting "a beaver deceiver," a fence that is designed to protect the upstream opening of a culvert, had been installed at various points but ultimately proved ineffective.

"We were getting to the point where we were having to clear the dam almost on an annual basis because they were damming right at the front of the culvert," added Williamson.

"This is kind of a valley-wide problem. We have a growing beaver population, I believe, in town, and they go wherever the wood and the water is and start making dams."

But Bob Brett, a biologist who has been monitoring the local beaver population since 2007, said the animal is a keystone species that not only creates habitat for other wildlife, but also provides a barometer of the health of local wetlands.

"If you build any infrastructure in beaver habitat that will be damaged by beaver activity, then beavers are a problem. But beavers actually aren't a problem; they're essential to our ecosystem," Brett said, noting that there are approximately 100 beavers in Whistler.

"We've lost 75 per cent of our wetlands in Whistler and it's very important that we retain the ones that are still around. Beavers mean wetlands."

The issue, according to Brett, is a longstanding one at municipal hall.

"There are many, many examples of this happening in the municipality: the Sproatt trails, the Valley Trail itself, the whole village, from north to Green Lake, that was wetland, the transit station. It's over and over and over. They're built in the wrong place," he said.

"Whistler is built in what was originally massive beaver habitat. There were well over 100 beavers, no doubt. So if infrastructure were built to be beaver-safe—that is to say it allows for that sort of flooding, then it wouldn't be a problem in the first place," added Brett. "Secondly, in that case, where it's possible to retrofit, did they look at lining the pond at one end? Did they look at any sort of waterproofing of the infrastructure versus destroying beaver habitat?"

According to the RMOW's Beaver Management Policy, the goal is "to encourage coexistence between humans and beavers through management techniques that limit habitat alteration and provide long-term solutions." Brett would like to see that commitment put into action more effectively.

"I would like this to be a case study of how the municipality can do things better in the future, so that they actually walk the talk of protecting wildlife habitat," he said.