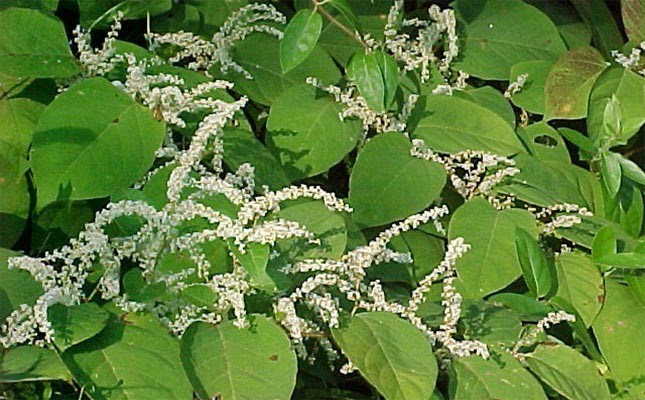 The war on Japanese knotweed has begun with spraying of the herbicide glyphosate on public land in the Sea to Sky corridor.

An invasive species not native to the region, Japanese knotweed can have serious environmental, safety and economic impacts. The aggressively growing plant can cause so much property damage that in the U.K. would-be homebuyers cannot get a mortgage if it's present in the area.

The weed can choke rivers and streams, displace natural plants that are important to the ecology, and is incredibly hard to remove. Even a small sliver of root left behind is enough to start a new outbreak — hence the use of a chemical herbicide rather than removing the plants by hand.

Kristina Swerhun of the Sea to Sky Invasive Species Council (SSISC) said most of the work is being carried out on Crown land along the sides of the Sea to Sky Highway, where for weeks there have been yellow signs notifying drivers of the presence of Japanese Knotweed.

"It is our highest priority plant right now," Swerhun said. "It can grow three to four centimetres a day, through asphalt, cement, drainages — anywhere with cracks. It can be a huge burden to taxpayers."

The SSISC, a non-profit society dedicated to minimizing the threat of invasive species in the corridor, secured funding this summer to hire crews for a 12-week program that includes eradication. In some cases, said Swerhun, there won't be outright spraying, which would impact all vegetation in the area, Some individual knotweed plants can be injected at the root with the herbicide.

"It will not be the case of chemical control the whole time, but where it needs to get taken down it gets down," Swerhun said.

"This is one tool in our toolbox and we use it when we need to. The signs along the highway were placed there to show contractors mowing the sides not to mow in these sections, which would make it more easily spread."

The Sea to Sky corridor is part of an area that has a Pest Management Plan (PMP) that provides regulations for an integrated pest management approach to managing invasive species on crown land.

Work has been focused in the Squamish area, with a schedule of herbicide treatment and PMP details on the SSISC website, www.ssisc.info, under the tab "Field Work."

"This one plant causes so much destruction. It can actually cause safety problems because of sightline issues. Residents have called us and said they can't get out of their driveways because they can't see the road," Swerhun said.

In a release, the SSISC said that glyphosate "is a non-selective herbicide, which means it will target all plants, native and invasive," but it's non-residual and rapidly degrades, principally through micro-organisms. It is also non-persistent in soil and water.

The time required for the chemical to dissipate by half ranges from days to a few weeks, depending on soil and climatic conditions.

In March, the SSISC announced a pilot program that provided a rebate of up to half the cost of removing two particularly troublesome species, or between $500 to $1,000, depending on the size of the property and sensitivity of the location. The deadline passed in June.

Swerhun said they had been working with homeowners throughout Sea to Sky.

"We have about 16 homeowners involved in the program, equally shared by dealing with outbreaks of hogweed in Britannia Beach and Japanese knotweed throughout the region," she said.

In one case in Pemberton, the SSISC was helping a homeowner whose Japanese knotweed problem had moved a septic tank, Swerhun said.

"This round of funding is finished but if anyone is interested we can get them on a waitlist to show our funders there is a need to continue the program," she added.

The organization has also just completed the second year of its Invasive-free Certification program for the horticulture industry, the first of its kind in B.C.

The program grew out of a horticulture forum hosted by the SSISC in November of 2010, where the feedback from the industry was that there is a lack of education on invasive species and their significant threats. The goal of the program is to integrate targeted invasive species management into the practices of horticulture and landscape companies serving the Sea to Sky corridor, and recognize those companies that are making a difference. Training was provided to participating companies on species recognition and procurement practices, site and species control methods and disposal practices.

The program this year involved over 60 participants representing 15 different companies.

"The SSISC salutes the companies that have volunteered to take part in the program," said Swerhun, adding a big thank-you to the Community Foundation of Whistler for funding.

Meanwhile, the Ministry of Forests, Lands and Natural Resource Operations and the Invasive Species Council of B.C. have announced they will collaborate on a five-year plan to tackle invasive species through the province.

"The provincial government recognizes the potential dangers posed by invasive plant and animal species, and this strategy provides a comprehensive approach for dealing effectively with those threats," said minister Steve Thomson recently. "We appreciate the contributions made by all of the agencies and individuals involved in this project."

Invasive species are any species of plant or animal that is not native to the province. Some of the species are innocuous, while others can push out native species and alter habitats. In some cases they can harm infrastructure and people. The Japanese Knotweed, as noted, can choke rivers, crack pavement and ruin the foundations of buildings, while the giant hogweed extrudes a sap that, when exposed to UV light, burns skin and in rare cases can cause blindness.

The framework being put together by the province will include an action plan that is already under development. Among other things, the plan will establish how species are to be removed and disposed of, while providing funding to groups that are certified to do the removal. Over 100 stakeholders are involved in drafting the plan.

In addition to provincial funding, the new framework also draws financial support from Environment Canada through the Invasive Alien Species Partnership Program, and the Investment Agriculture Foundation of B.C. The total cost has not been announced.

Some of the species hitch rides on vehicles, have spread to B.C. or are blown here on the wind, while others are purposely planted or released by humans.