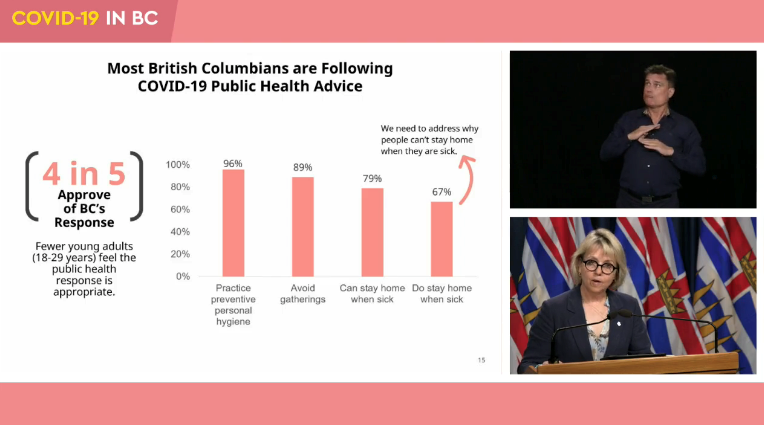 B.C. has seen a worrisome uptick in new COVID-19 cases in recent days, prompting provincial health officer Dr. Bonnie Henry to warn that “we do risk a rebound.”

“We have not had a hundred cases in a single time period (before),” Henry said. “This is worrying to us.

"We are starting to see an upward bend of our curve," Henry said. "What this shows is that we do have a possibility of having explosive growth in our outbreak here in B.C. if we're not careful in how we progress over the summer."

However, she added: "We still have it in our hands to make a difference of bending this curve."

Public health officials want to keep the virus' reproduction numbers—the R function—down to one. That means only one other person gets infected. But in B.C. that number has started to rise above one, Henry said.

"That is concerning," she said. "That's the level, that one, is where we can stop the outbreak. So we are at a place where we could see rapid progression of this virus, if we're not careful."

Many of the new cases are among people in their 20s and 30s, and are related to social events and parties in the Kelowna area. Most worrisome, said Henry, is the fact that in some cases, those who tested positive would have had contact with a relatively large number of people.

Here are today’s COVID-19 numbers for Monday, July 20, with numbers from Friday July 17, the last reporting period, in brackets:

This story originally appeared in Business in Vancouver on July 20.