Researcher warns of increased potential for human-bear conflict in coming weeks
Sep 8, 2015 2:30 AM By: Brandon Barrett 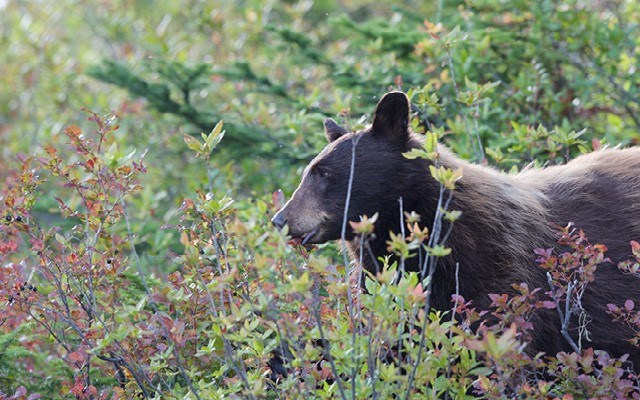 CROP CONCERNS A hot and dry summer has led to few berries in the alpine for Whistler's bears to feed on before hibernation. Brownie, a 15-year-old female, is pictured in August foraging for huckleberries on Whistler Mountain. Photo by Michael Allen

A local researcher is warning that a weak late-summer berry crop could have deadly consequences for Whistler's bear population.

Michael Allen, who's been studying the region's bears for over two decades, said that Whistler's alpine berry crop - a vital food source for local bears as they fatten up for winter - has virtually disappeared after a hot, dry summer.

"I've been watching bears for 22 years and I've never seen them without a berry crop at this time."

Allen estimated that the crop has been decimated by about 90 per cent compared to an average year, and without the luxury of feeding on salmon like their Squamish counterparts, Whistler's bears could be without a substantial natural food source for the next month and a half before going to den.

And after a summer with few reported human-bear conflicts - compared to 2014, when 11 bears were killed as a result of conflict- the Whistler Get Bear Smart Society is bracing for a flurry of activity with bears expected to scour the valley for food.

"We're hoping for the best and preparing for the worst," said executive director Sylvia Dolson. "We're all bracing for it because we knew it was coming, so we're ready to amp up our programming if bears do spend more time in the valley bottom."

But the non-profit can't protect the community's ursine residents on its own, Dolson explained.

"Just because we're running our programs, it doesn't means that nothing bad is going to happen because it's 100-per-cent up to the people who live here," she said. "We need the support of the people living here and for them not to take this so casually. I think one of our biggest problems is when people say, 'Oh well, bears live here and they're in my yard, so what?' But that's not really a good approach to saving a bear's life. Eventually they're going to take more liberties the more comfortable they become in residential areas."

And it's those developed behavioural patterns that Allen worries about, too, particularly for Whistler's adolescent bears that are just learning where to source food.

"My biggest concern would be for the 20-plus sub-adult bears under four years old that will start learning about human food," he said. "They may not get killed this year, but they'll start learning about human food, and three years from now maybe they'll get trapped and tagged, and then the next step is they get (killed). That seems to be the usual cycle in Whistler."

It's a cycle that has implications for the future growth and survival of Whistler's bear population, which only counts 10 adult males, according to Allen's research.

"Adult males just aren't surviving," he said. "They learn about garbage at two or three, some time goes by, they move around, maybe they get ear-tagged, and then they get killed (due to conflict) when they're five, six, seven years old.

"From a population perspective, that's a big concern."

Bear Smart has previously reported that 252 bears have been killed in Whistler since 1990 as a result of human-caused conflict. There are an estimated 63 bears currently living in Whistler, according to Allen's figures.

The public is reminded to keep potential bear attractants, like garbage and birdfeed, secure at all times. To learn more about safe bear management practices, visit www.bearsmart.com.

Allen will be discussing the complex relationship between Whistler's bears and berries at a free talk held at the Whistler Public Library on Saturday, Sept. 19 at 6:30 p.m.