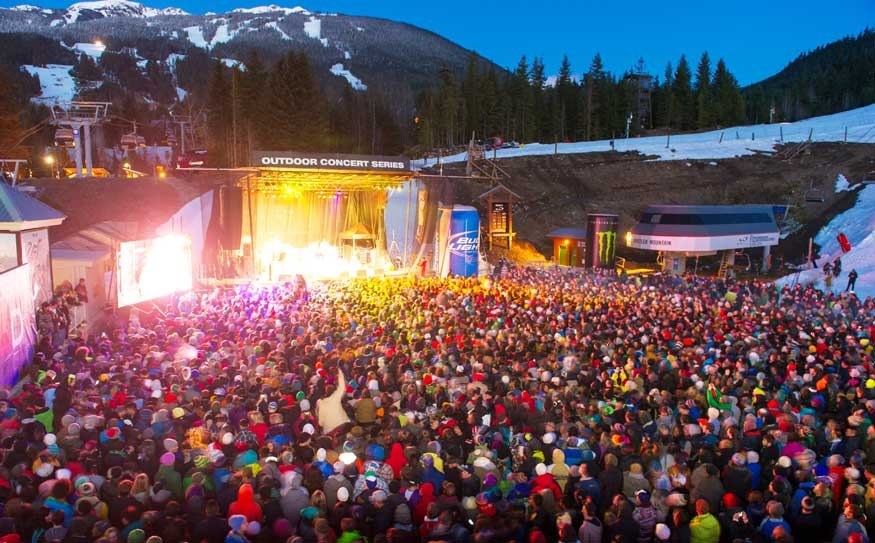 NAS A live concert from hip hop legend Nas kicked off the 2013 WSSF with a huge crowd — a welcome sight for event organizers struggling to make ends meet after losing two major sponsors.

Sue Eckersley's voice is happy but hoarse on the phone on Tuesday after working non-stop for weeks to put on the 2013 World Ski and Snowboard Festival. And the work isn't over yet — there are hundreds of details to resolve before the WSSF, and its value to Whistler, can be put into context.

Overall, she's pleased with the 10-day festival and the way the community stepped in to ensure that it was as good as could be, despite the unusual challenges she faced with her team at Watermark Communications.

"Obviously we had some obstacles to overcome with the departure of Telus (as a main sponsor), but I felt the event was as strong as it always is with a lot of people in attendance and great acts on stage, epic nights at the conference centre and great things going on in the village," she said. "There are always things you would tweak if given a second chance, but overall I'm very happy."

With the loss of Telus after last season, and General Motors' decision to pull out in the fall, the festival operated on a shoestring — though funding from the Resort Municipality of Whistler's Festivals, Events and Animation (FE&A) department supported the musical component of the festival with $135,000 in additional funding this year.

As a result of that commitment, and support from partners Tourism Whistler and Whistler Blackcomb, Eckersley said most festivalgoers may not have noticed that the festival's budget had been reduced from $1.8 million to $1.35 million.

"We spent a lot less money, and worked a lot harder at it," she said.

One area where people may have noticed a decline was in the World Skiing Invitational, an event that has also served as the Association of Freeskiing Professionals (AFP) championships for the past three years. The prize purse was reduced substantially this year to $26,000 over two events, a big air contest and a slopestyle. The previous year the prize purse was over $60,000, plus a car valued at $21,000. There was also a halfpipe event.

Eckersley said it was a particularly tough decision to cut the halfpipe event this year, as the WSI has hosted one of the orignal, and longest-running halfpipe events for skiers, but they had no choice.

"There was a considerable savings in prize money to ski athletes, so we really do appreciate their loyalty to our event," said Eckersley. "The prize money didn't impact who showed up and what they were doing, which was huge for us. Skiers have always been loyal to the World Skiing Invitational."

Another way that festival organizers reduced costs was to reduce their own management team. Watermark cut its production team, and hired fewer people to work in the village and on the mountains. Those who were hired worked harder.

"We downsized our management team, which seems not really all that possible and is why we have 12 very exhausted people right now," said Eckersley. "We're normally exhausted at this time, but now it's at the point where some of us can barely remember our names. We saved on our management and contract staff, and our valley-ops and alpine-ops did everything with less people.

"It's nothing that's sustainable, but people love this festival that work on it, and everyone was willing to work even harder to make it a reality this year."

On the music side, Eckersley said the funding actually increased with support from the FE&A program, which uses money allotted to resort communities by the province to draw visitors to the resort.

"The lineup was actually incredible, although without that FE&A money we would be having a totally different conversation right now," said Eckersley.

"The health of the festival is often based on the strength of the music lineup, though that's not always accurate — sometimes (the bands that are booked) reflect what's available at that time, and music is always very subjective, so people may not understand the costs and value of different bands."

The conference centre activities were generally successful. The Pro Photographer Showdown, 72hr. Film Festival and roller derby sold out, and there was strong attendance at Intersection and The End after party. Eckersley said the festival organizers will review other events in more detail in the coming weeks to determine what will be back next year.

For example, The Beginning launch party might be downsized or altered to include a live band, while the festival will likely work with the Spearhead Huts Project group on the multimedia Mountain Multiplicity Show to grow the event in 2014.

Eckersley is particularly excited about the roller derby event, dubbed Vengeance in the Valley, and said they will make some changes to the conference centre next year to create a better spectator experience.

"The venue was a challenge for us because we had to put the floor on one side and everybody else on the other, and not all viewing corridors were as good as we take pride in creating for other events," she said. "I've talked to the conference centre and we're going to have a rigging company come in in August and put hang points in the roof so we can hang our screens from the ceiling next year and have the roller derby floor right in the middle of the ballroom."

Eckersley will be collecting feedback from partners in the resort in the near future, including hotels, to determine whether the festival succeeded in drawing visitors to the resort — the reason the festival was created 18 winters ago. So far the anecdotal feedback has been positive.

"One business said they had a record high sales for winter on the second Saturday, while another said they set a new record for business, summer or winter," she said.

"Definitely the village was busy, but we don't have any numbers yet around accommodation. We've heard Whistler Blackcomb is happy with ski visit numbers, although we're not sure what those are yet.

"Overall, our number one priority is to create business while we reflect on our community and mountain culture, and I believe we did that this year. Particularly in light of the challenges we face, I'm very happy with the festival this year."

Tourism Whistler won't have final booking numbers until mid-May, and bookings were too last minute to provide any kind of comparison to previous years.

The festival will continue in 2014 said Eckersley, and should have some new sponsors in place by then. She confirmed that the festival organizers were in discussion with several companies, including automotive companies and telecommunication companies, that are progressing, and they hope to be able to announce something by the end of the summer.

"We're pretty confident that next year we'll be back in a position where we have the money to spend," she said. "At the end of the day we want to put out a product that Whistler can be proud of."