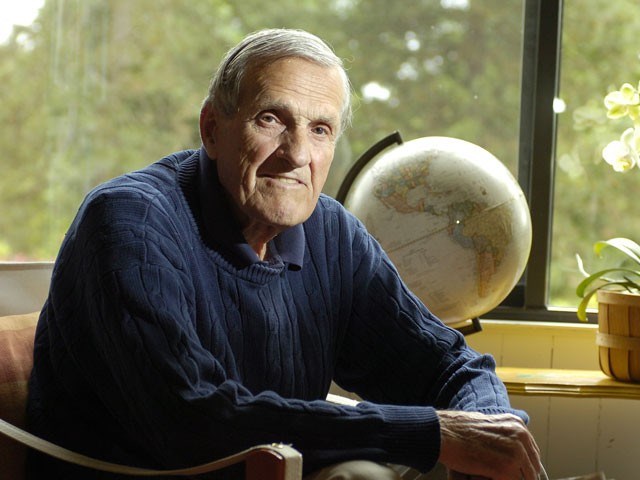 Tony Kingsmill can remember the events of May 12, 1944 as though they happened just yesterday.

He was far from home that day, on the banks of the Gari River in Italy. It was early in the morning. German soldiers were hiding on a big ridge on the other side of the Gari, raining down a hail of machine gun fire.

The young Canadian knew he had to get a bridge across that river — lives depended upon it. He was just 24 years old, recently graduated from the University of Toronto’s engineering school.

“The infantry had gone across on little rubber boats but half of them drowned because of the machine gun fire,” recalled the 87-year-old former Whistler real estate salesman. “The ones that were left were sort of dug in, waiting for the tanks to show up.”

Captain Kingsmill had developed a never-before-seen idea that called for two tanks to put a Bailey bridge over the 80-foot swift-running river.

“I had the unit which was responsible for repairing and maintaining the tanks and guns and trucks and things so I wasn’t really what you might call a fighting solider, I was a fixing soldier,” he said, without missing a beat.

It was risky. The plan was to put the bridge on top of two tanks; one tank would drag the bridge across while another would push it into place from behind.

Kingsmill was in the first tank and escaped into the water as it dragged the bridge across the river.

He made it back to safety but not before a German mortar blast sent searing shrapnel into his back that would make the rest of the events that day a little foggy.

But he knew he had succeeded. The bridge held as tanks made the crossing to back up the infantrymen and the battle raged on.

The German Gustav Line, which linked Monte Cassino to the sea, was compromised with that breakthrough, and the Allies eventually began to make their way to Rome.

Kingsmill recovered from his wounds and rejoined his regiment a month later. He received the Military Cross for gallantry.

Twenty years later this bona fide war hero came to Whistler with his family and bought a ski cabin. It was 1968.

The Kingsmills moved here permanently in 1987 and called the community home for the next 15 years.

“I was really a professional engineer but when I went up there I had nothing else to do so I reinvented myself as a real estate salesman,” he said. “So I rode the lifts and sold real estate at the same time.”

He moved back to Vancouver when he could no longer ski.

Kingsmill returned to the small town of Sant’Angelo, Italy this year. A lot had changed in the 63 years since that fateful crossing — the place has prospered and changed with the times. But the Italians had not forgotten May 12, 1944.

In conjunction with the Calgary Regiments, the townspeople erected a plaque, which tells the story of that day and renamed that bridge the “Kingsmill Bridge.”

“There hasn’t been a bridge there in 62 years,” the grandfather of three chuckled. “What really was impressive was the local people were still remembering this. We’ve long since forgotten it. They’re keeping it alive.”

And on the eve of Remembrance Day, Kingsmill recalls not only the victory of getting those tanks across the river, but also the fallen soldiers who lost their lives in war.

“Keep alive those poor soldiers who got killed,” he said of Remembrance Day. “There were many thousands of them. It was a terrible war and it involved the whole world.”

Whistler’s Remembrance Day ceremony will take place on Sunday, Nov. 11 at 10:45 a.m. at the cenotaph by the main fire hall in the village.