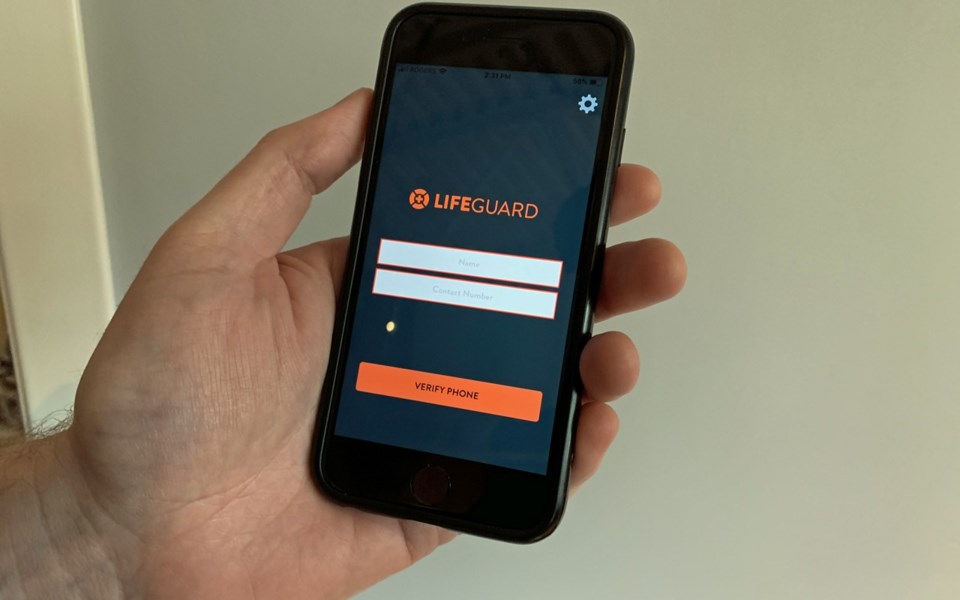 A new app being launched in health authorities across B.C. aims to cut down on overdose deaths. Photo by Brandon Barrett

less than four years ago, entrepreneur Jeff Hardy had nearly lost everything to alcohol addiction.

"I lost my home, I lost my business, I lost my family. I don't really know what I got to keep, to be honest with you," he said with a chuckle.

"But one thing I will say is that once you get through, get to the other side, and get clean and sober or whatever you want to call it—I got my family back. I've got this new venture, and we're saving lives.

"You get your life back when you get to the other side."

Hardy's new venture—an app to prevent people from overdosing while alone (called Lifeguard App)—was inspired by a friend he met while in treatment for his own addiction.

The man, Evan, died of a fentanyl overdose in the treatment centre.

"It was a pretty horrific scene for us to see," Hardy said, adding that the incident got him thinking about an app that could prevent overdose deaths.

Nearly four years later, his Lifeguard App is rolling out in regional health authorities across B.C. after being picked up by BC Emergency Health Services.

His vision is twofold, he said: saving lives first, then getting people on the road to recovery.

Once downloaded, users are asked for a name, phone number and emergency contact info before agreeing to terms of use (real names are not required).

On its homepage, users select the drug they're about to ingest from a drop down menu, and activate the app before taking their dose.

After 50 seconds, the app sounds an alarm, which grows louder if the user doesn't turn it off. After 75 seconds, a text-to-voice call will go straight to 911, alerting dispatchers of a potential overdose.

"That information only lands at the desk of 911 and ambulance services. No RCMP, no fire department," Hardy said.

"So it's only there to help you, not to judge you or arrest you or any of those types of things."

Another feature allows users to connect directly with a crisis line, Hardy added.

Coming from a background in sales and marketing ("I've got about as much technical ability as this doorknob that I'm looking at right now," he joked), Hardy's main input into the project was the lived experience of addiction, he said.

"It gives you a perspective that, if you haven't gone through addiction, most people, they just don't get it," he said.

"And so the app was built around those challenges that people who are in addiction have."

Despite the attention being directed to COVID-19 in recent months, the opioid crisis has not gone away, and may in fact be exacerbated by stay-at-home orders, said Dr. Geoff McKee, medical health officer with Vancouver Coastal Health (VCH).

"Stigma around addiction results in many people who use drugs, using alone," he said.

"That's a reality that really needs to be addressed, and now more than ever we are encouraging people to not use alone and to buddy up or access overdose prevention services where they're available."

Hardy's Lifeguard App is "another innovative tool in our toolbox" to prevent overdose deaths, McKee added.

"We know that the response to the overdose crisis really requires a lot of different types of interventions," he said, referencing the intervention "pillars" of harm reduction, prevention and treatment as examples.

"And so really we need tools from all the different pillars to help support folks, but we also know that there's no silver bullet here ... It's just another support that can help prevent overdose deaths or other harms in those settings."

While officials don't release community-specific stats related to overdose deaths due to privacy concerns, in April 2020, B.C. saw 117 suspected overdoses—a 39-per-cent increase over April 2019—according to the most recent BC Coroners Service report.

Further, March and April 2020 represent the first time the province had more than 100 overdose deaths in back-to-back months since November and December 2018.

The VCH region, which includes Whistler, has seen 107 overdose deaths so far this year, second only to the Fraser Health Authority (120).

Read more about the app at lifeguarddh.com.