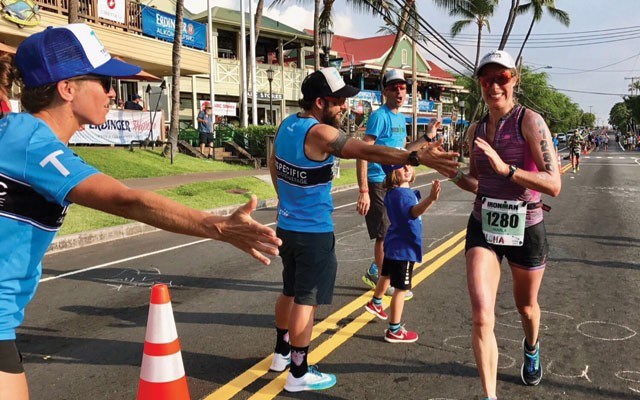 Zipping along Marla Zucht powers through the third stage of the Ironman World Championships in Hawaii on Oct. 14. Photo courtesy of Marla Zucht

Marla Zucht pulled off an incredible feat at the Ironman World Championships at Kailua-Kona, Hawaii, on Oct. 14.

Zucht qualified for her second-ever World Championships and 10th Ironman race overall, after placing second in the women's 45-to-49 division at the Subaru Ironman Canada held here in Whistler and Pemberton in July.

After being challenged in Hawaii two years ago, Zucht became determined to return and give the race another shot. She did just that and once again faced off against the top athletes on the planet.

"I knew I wanted to qualify again to get back here to compete with some of the best triathletes in the world," Zucht wrote in an email. "(The) second time around I think it was even more amazing. Coming to the World Championships this time, I was more familiar with what to expect both leading up to the race and on the actual day of the race."

The race's location on the Pacific Ocean coast provides stiff competition for racers, Zucht explained, as they complete the 3.86-kilometre swim in the ocean itself, while gusty winds can act as a wall when charging straight into them.

"Competing in Kona is definitely the hardest race experience I have ever had. The ocean swim is challenging with the current and turbulent swell. But much more difficult are the extremely strong winds that the bike course along the Kona coast and lava fields is known for — the head and crosswinds were blasting us on race day at between 20 to 40 km/h," she wrote, noting temperatures for the marathon were 33 degrees Celsius combined with humidity levels of over 90 per cent. "A big part of executing the race well is having to manage the elements."

In her second go-around in Hawaii, Zucht said she was better prepared for elements like the swim, which is drastically different from her Alta Lake training ground, as well as the high winds elsewhere. But another significant adaptation was in her mindset.

"I was able to be more patient this time around, not letting myself think too far ahead of the hours and distances still to come. It's a very long day in tough conditions and dwelling on that can really bring on doubt and negative thoughts," she wrote in a follow-up email, noting her family was there to support her. "I kept reminding myself what was important at that exact moment in the race and to be patient and positive as I encountered and embraced each few kilometres just ahead."

Zucht said while she cut her time dramatically, she knows if she earns the chance to go again, there's still more she can do to knock it down further.

"I also finished knowing I have race elements that I can still tweak and improve upon such as race nutrition, but overall I feel happy with my race performance and so fortunate to have the opportunity to be here to race," she explained.

"You cannot help but be inspired, intimidated and enthralled by it all," she noted.