A hard look at Everest's Base Camp

Dianne Whelan's 40 Days at Base Camp premiers in Whistler on Wednesday
Apr 4, 2012 9:00 PM By: Stephen Smysnuik 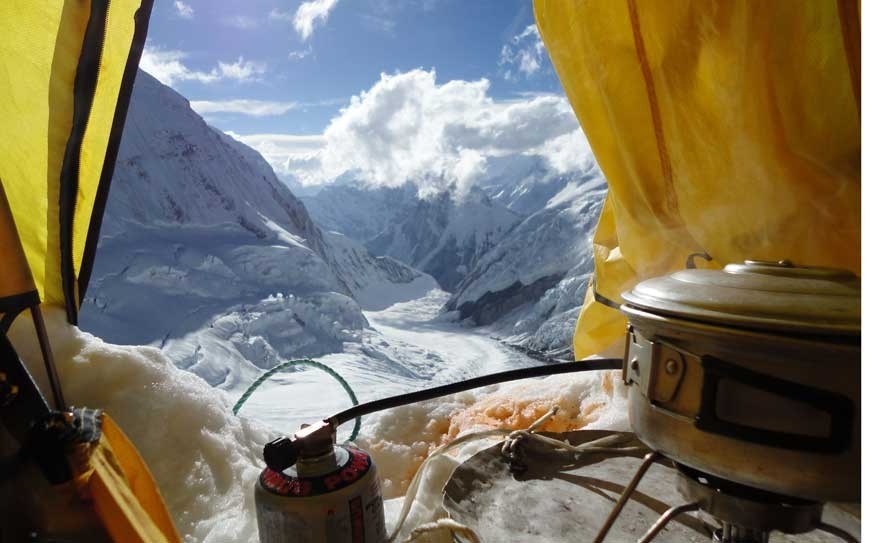 Climate change is causing the glaciers on Mount Everest to recede, unearthing corpses left behind on the mountain from past expeditions. Whelan was filming what would become her feature documentary 40 Days at Base Camp when she found one that had literally come out of the ice.

"I was very tactful in terms of how I show it in the film," she says by phone while on vacation in Cannes, France. "It's extremely uncool to film a dead body there and the companies that are charging people all that money did not want me to film that."

More bodies were discovered during the time that she was filming. The adventure company guides on the mountain threatened her. So did the Sherpas. Even a Nepalese government official threatened her but eventually the guides and Sherpas removed the bodies, but not before virtually everyone at Base Camp had seen one.

Whelan had thought there would be a candle light vigil or some kind of memorial for the dead, but people merely stepped over the bodies, ignoring them to focus on the difficult climb to the summit that lay ahead.

"You can't really deal with it because to confront it in that place and at that time is to psych yourself out for what you're about to do," she says. "It's when you get home that the impact of that kind of hits you."

40 Days at Base Camp, showing for one night only on Wednesday at Village 8 Cinemas, documents her stay at the Base Camp of the world's most famous mountain. The Vancouver-based filmmaker arrived as climbers were setting up, she left as they were coming off the mountain and she caught everything in between. While she never tackled the summit herself, she strapped small video cameras to four climbers, the footage from which is spliced throughout the film.

She arrived at Base Camp in April 2010. There were over 800 people paying to summit the mountain, some of who had no prior climbing experience. Nearly all of them paid adventure companies between $60,000 and $100,000 to "hand hold" them to the top. It's a far, far cry from when Edmund Hilary and Sherpa Tenzing summited Everest for the first time.

"I had a picture of those two guys in my bedroom when I was a kid, so I romanticized this place and this idea," she says. "So when I went there in 2007, I mean that myth became completely shattered for me. I get there, I see all the garbage — which I had heard about, but it's hard to understand the extent of it until you see it."

"Essentially, the world's highest mountain has become commercialized," she says.

She embedded herself with the Nepali-based Asian Trekking, the oldest adventure company active on Everest. During her 40 days, 512 people summited. Five people died, which Whelan says was "actually a really good year."

She says base camp is like a "beehive with no queen," a theme that she explores throughout the film in documenting the differing, at times opposing, companies taking up space at the camp.

There are no rules or regulations, making trash disposal a serious issue. There is very little account for the hikers who lose their lives on the mountain. Whelan says that one in 40 climbers never makes it down the mountain, and one Sherpa told her that it's believed about 250 corpses litter the mountain from base camp to the peak.

The challenge of Everest is not the climb to the summit itself (which is only 11,000 feet from base camp) but in acclimatizing to the extreme altitude, so climbers must spend time at camps one through four at higher elevations, always returning back down to base camp each time before finally tackling the summit. It's exceedingly dangerous the further up the mountain one climbs and yet, as the film documents, people come by the hundreds every year to climb it.

"It's an interesting metaphor about our culture, in the sense that it's the whole extreme tourism thing now," she says. "That's one of the really compelling things about the story, I think, is there are people that show up there that have never climbed a mountain before, or have even seen snow."

Whelan started her career as a photojournalist for the Whistler Question in the late 80s and went on to work as a freelance photographer. After completing film school she worked with the National Film Board on the 2009 award-winning short documentary This Land, about the Sovereignty Patrol in the Canadian High Arctic. She first visited base camp in 2007 for an assignment for Outpost Magazine and as soon as she arrived, she knew the location was perfect for a documentary.

"You're looking for Aristotle's rule of thumb in a good story in a documentary, which is a sympathetic hero on a vital quest against insurmountable odds. I suddenly found myself at base camp with about 800 of these people, all vying to get to the top of this mountain."

She was busy completing This Land at the time and once it was released made immediate plans for her Everest film. She sent out feelers for broadcasters, all of which rejected the idea on the basis that several films, not to mention books, feature articles and TV spots, have been made about Everest already. So, she went at it alone.

"I felt quite compelled. I had seen those films and felt that I had something different to make," she says.