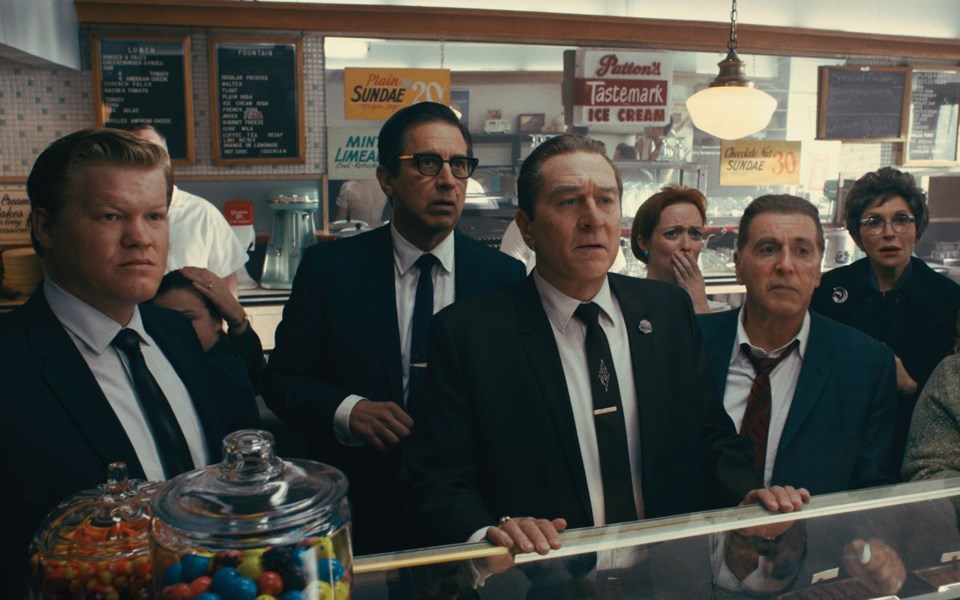 mob crowd The Irishman is set to screen at the Whistler Film Festival next month—if you can wait that long. photo courtesy of netflix

Friends, I have failed you. The Irishman, the new Martin Scorsese flick that I've been talking about for the past few weeks, is streaming on Netflix USA but is not yet available for those of us here in the Great White North unless you have one of those fancy, hacker, VPN changers in play to trick the machines into thinking you are enjoying their "content" from somewhere other than where you are. (The legality of those things is a grey zone, sort of like putting an empty envelope in the bank machine and pretending it's full of cash, then withdrawing your daily limit with a shrug and a fleeting "I'll have to figure that out later" twang of conscience.)

In any case, us Canadians should have The Irishman streaming on Nov. 15, but wait! You might want to hold off because the Whistler Film Festival just announced they will be screening The Irishman twice on the big screen, big sound at the Rainbow theatre at noon on Thursday, Dec. 5 or at 6 p.m. on Sunday, Dec. 8.

Real movie fans ought to jump at the chance to enjoy three-plus hours of Scorsese, DeNiro, Pacino, Pesci, Ray Romano and crew doing their thing in an actual movie theatre (which is how Scorsese wants it to be seen, as he st­ated in his rant against Marvel films a few weeks ago). In any case, this is just the tip of a fully packed WFF film lineup that we will dig into over the next few weeks. (Bruce McDonald returns!)

I also forgot to mention our third and final "Ninja Movie of the Week" last week, in honour of The Ninja Gym in Squamish (check it out!), so let's skip ahead to the highwater mark of ninja comedies, starring one of the greatest performers of the past 30 years—Chris Farley in 1997's Beverly Hills Ninja.

Sure, sure, it only has 14 per cent on Rotten Tomatoes but that's because North American critics around the turn of the millennium were either not smoking enough weed, or too afraid to admit it publicly (see also: Strange Wilderness, two per cent for one of the greatest comedies of the 2000s.) Certainly Beverly Hills Ninja is not the strongest flick in the Farley portfolio (Tommy Boy wins), and the fish-out-of-water-in-Beverly-Hills story was already perfected by Eddie Murphy (Beverly Hills Cop II is almost better than the first), but with the way the world is today, it's goddamn refreshing to sit back and watch a talented comedian commit 110 per cent to a script about an overweight, clumsy, round-eyed, pale skinned, blond "ninja" unleashed in a world of opulent excess to fight a counterfeit money operation and find love. Farley was a god and Beverly Hills Ninja is the download of the week. (And if you haven't yet, check out Adam Sandler's stand-up special 100% Fresh on Netflix for a beautiful Farley tribute at the end. You can also find just the tribute on YouTube.)

Long-criticized as either objectified navel gazing or angry feminist backlash, the new Banks Charlie's Angels keeps a lot of the standard dress-up fetishism (random jockey outfit included) but carries a definite run-by-women-who-can-run-shit vibe (also, jokes about how awesome cheese is). It could have pushed the individualism of its characters a bit more but this new Charlie's Angels is decent empower-pop entertainment and it's always good to see Stewart lets loose.

Ford v Ferrari also opens this week (maybe in Whistler). It's a solid racecar tale, based on a true story and is essentially the "dude offset" movie to the Angels' bubblegum fun.

Speaking of cars, put your snow tires on and pray for snow!