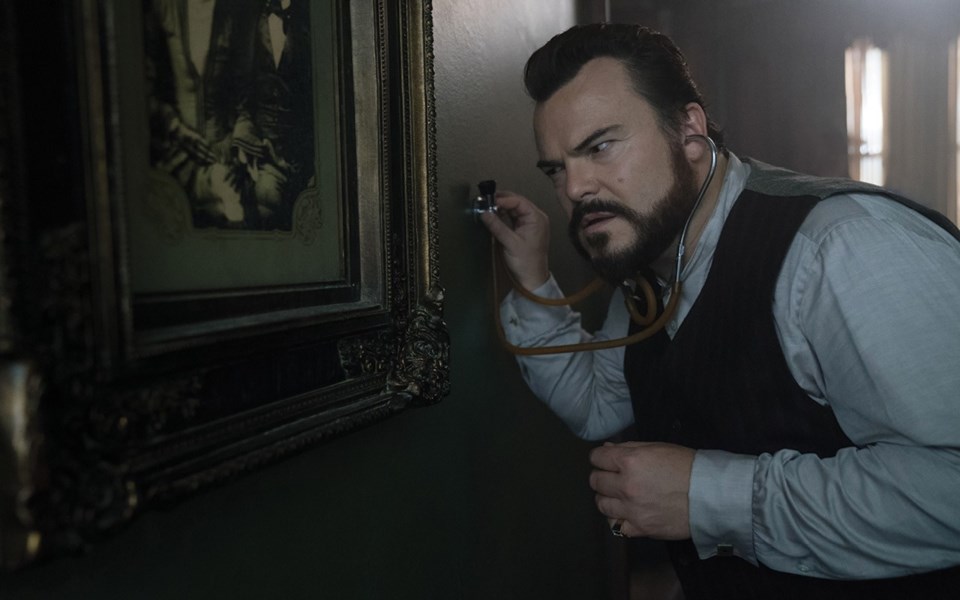 TICK TOCK Jack Black stars in The House with a Clock in Its Walls. Photo by Quantrell D. Colbert&copy; 2018 Universal Pictures and Amblin Entertainment

Here's a crazy number. This column has appeared in the Pique for 783 weeks in a row (that's 15 years, for you math wizards out there.) That sounds like a lot of weekly columns, but it's even more astounding to me, because I had to write them all—every Tuesday night for the past 783 Tuesday nights ... sitting, typing, talking shit.

Don't worry, I'm not expecting a cake. G.D. Maxwell has been doing his (longer) column for over 20 years, but I'm still pretty astounded at the commitment and the time that has passed. There were four video-rental shops in Whistler when I started this sucker under the steady eye of Bob and Kathy Barnett (legends!). I wrote at least two columns while concussed (Kristen Dillon wrote one of them) and banged out more than a dozen others at sunrise on publication day. The WSSF Filmmaker Showdown used to always happen on a Tuesday night so there I'd be at dawn, drinking whiskey with Andrea Cooney, listening to gangster rap records, and making it up as quickly as possible.

There were columns about my mom's cat puking and columns about gang violence in the village, and one or two gushing ones about Angelina Jolie. And through it all, the community, at least one or two of you, kept reading. So thanks Whistler (and Squampton and Pemby) for hanging in there. Shit-talking feeds my family and this little patch of literary real estate has been the longest committed relationship of my life. And that's the magic of cinema—even when it's crappy, or maybe especially when it's crappy, it's still worth talking about.

This week everyone seems to be talking about Fahrenheit 11/9, the latest documentary from professional rabble-rouser Michael Moore (Bowling for Columbine, Roger & Me). The title is a riff on the date Donald Trump won the presidency of the United States (9/11/2016) but, in the kind of poetic justice only reality can deliver, it's also a riff on Moore's previous film, Fahrenheit 9/11, which took on the Bush administration in 2004, and the dystopian Ray Bradbury novel Fahrenheit 451, about an American future where knowledge is systematically destroyed by the ruling class. So, there's lots to play with here, on the subtextual level.

On the surface, however, is where Moore does his best work. "How the f*ck did this happen?" he asks, early in this new film, "And how do we get out of it?" Moore throws everything he has at this one, in hopes that outrage will drive change (100 million Americans don't regularly vote and the midterm elections are looming).

Moore is not a perfect filmmaker, nor does he pretend to be. He manipulates his medium, and audience, to make his points. In this one, he's critical of the mainstream media for using Trump soundbites to boost ratings even as he uses the same material for comedy. (The film's bit on the Democratic Party's blundering role in the current situation is actually the most fair and balanced part of the film). The most poignant parts of Fahrenheit 11/9 come from Moore's hometown of Flint, Mich., where the drinking water has been poisoned for quite some time, and instead of fixing it, politicians are still looking for ways to profit from the solutions.

Even if some of his tactics feel a bit underhanded, Moore's message resonates: this is craziness, and it's tragic. Get mad, and go do something about it. Or else this might be the end.

Speaking of, there's a doomsday clock hidden in a spooky mansion in The House with a Clock in Its Walls, a contender for stupidest title of the year (watch out Sicario: Day of the Soldado). Jack Black stars as a kooky uncle/wizard in a spooky, family friendly fantasy/mystery about a young kid thrust into a world of mystery and magic. Cate Blanchett also stars but perhaps the biggest shock here is that it's directed by Eli Roth, best known for torture porn like Hostel and the Death Wish remake. Roth reins it in and pulls from classic Edward Gorey imagery but, overall, the film is a bit uneven. There's lots of CGI action and seen-it-coming jump scares but not enough attention to fear, grief, and how a kid would process such things.

And that's it for this week. Thanks for the good times, Sea to Sky. See you next Thursday for week 785. Rock 'n' roll.