Isn't it fitting that even though it opens on Valentine's Day, the weakest part of Alita: Battle Angel is the romantic subplot, while the ass kicking and grim post-apocalyptic landscape steal the spotlight? Directed by Robert Rodriguez ( Planet Terro
Feb 15, 2019 4:00 AM By: Feet Banks 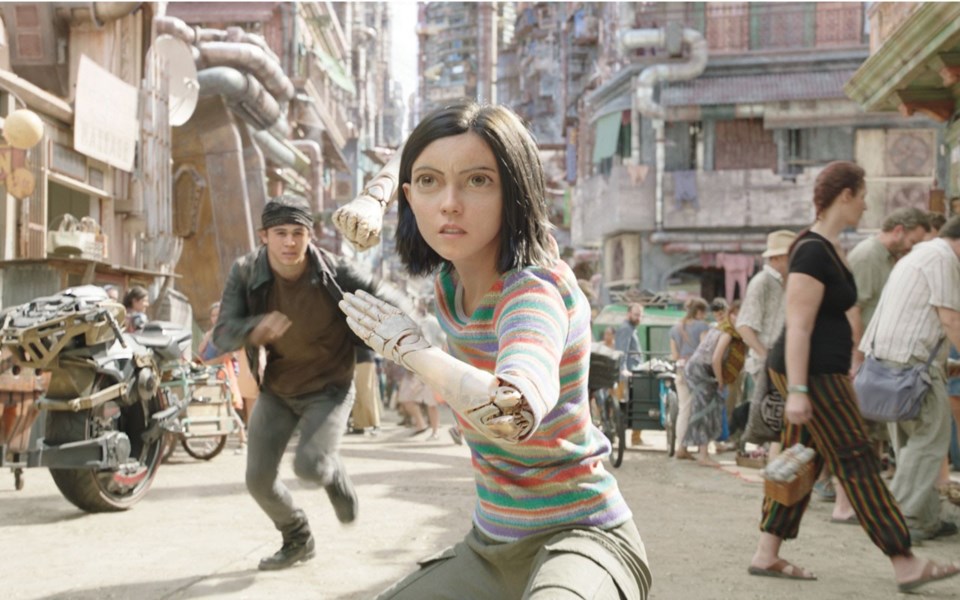 Isn't it fitting that even though it opens on Valentine's Day, the weakest part of Alita: Battle Angel is the romantic subplot, while the ass kicking and grim post-apocalyptic landscape steal the spotlight?

Directed by Robert Rodriguez (Planet Terror, Desperado) from a manga-adaptation spearheaded by James Cameron (Avatar, Terminator 2, Piranha II), this one is about a discarded cyborg (Rosa Salazar) with a deep secret who is nursed back to health by a benevolent scientist (Christoph Waltz) only to discover she is the greatest ass-kicking mechanism on the planet and the powers that be will do anything to stop her.

The set-up and world building is impressive, the visuals are gorgeous, and while co-writers James Cameron and Laeta Kalogridis throw a lot of plotlines around, Rodriguez has always had a flair for action and with Cameron's budget behind him the result is a pretty kick-ass ass-kicking flick. Unlike the frantic, choppy fight sequence barrages we see in comic book flicks like The Avengers, Rodriguez shoots his fight scenes close enough to feel personal and viscerally painful, but with enough choreography, distance, and shot-duration to show off the grace and beauty of the battles.

At the end of the day this is still a cyberpunk comic-book movie, with a plot that falters at times and dialogue that could be tighter, but the (CGI- accentuated) Alita character is intriguing enough, and Cameron/Rodriguez inject enough creativity and tenacity to make Alita a decent post-apocalyptic coming-of-age flick.

The hidden value of genre films is that they can more easily shed light on the human condition than some of their artier counterparts. This is why you get zombie movies with poignant messages about racism or consumerism, or 1980s action splatter-fests that predict, and critique, our current reality TV, YouTube star, selfie society.

The contemporary world might be a few years away from the violent corporate oligarchy (and death squads) of Alita, but the writing is on the wall. Sharpen the pitchforks, we'll head them off at the pass.

Sticking with the revolution, February is also Black History Month and Netflix has a few interesting documentaries worth checking out.

The Two Killings of Sam Cooke is a new doc about the life, and mysterious death, of one of soul music's brightest stars. Through archival footage, and interviews with friends, family and academics, the film covers a lot of ground in under 90 minutes, shining the spotlight on Cooke's importance as both a musician and an activist/role model in the civil rights movement of the 1950s and early '60s.

Cooke was shot to death—in alleged self-defense—in 1964, but his politics and revolutionary role in supporting black artists in the music industry raises more than a few questions. And the way the LAPD handled the investigation doesn't help.

Slightly more uplifting, and coming from way out in left field, Accidental Courtesy: Daryl Davis, Race & America is a doc about black pianist Daryl Davis and his "hobby" of meeting and befriending members of the Ku Klux Klan.

One person at a time, Davis is out to literally kill racism with kindness and respect, and it works (sometimes). Many of the Klan members Davis has met end up turning over their robes to him and reconsidering their beliefs. It's an interesting approach (although not everyone in the black community is on board) but Davis' insistence that "when you're talking, you're not fighting" has a certain simple appeal to it. This one is 100 minutes and also available on Netflix.

Of course, Ava DuVernay's 2016 doc 13th is still one of the most important flicks of the millennium, and a lesser- known but also important one is Maya Angelou: And Still I Rise. It doesn't have DuVernay's polish but still gives an interesting look at a writer/activist/legend whose influence can be still be felt today.

Unrelated to Black History Month, the Stream of the Week is Netflix's Russian Doll starring Natasha Lyonne and her perfect hair in a sort of updated Groundhog Day premise involving death, fate, parallel universes and so, so much more. The less you know about this one going in the better it is, but know that the episodes are only 30 minutes (there are nine of them) and it rules.