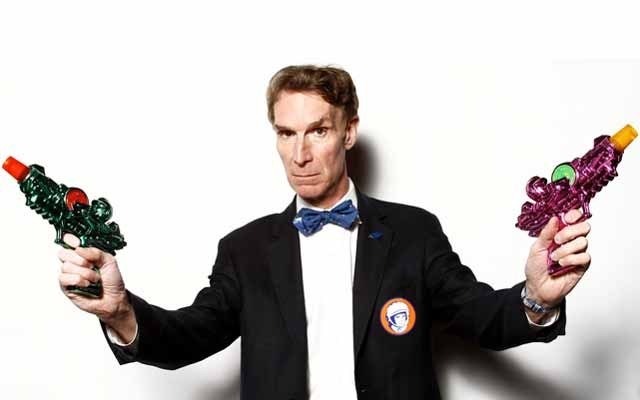 At the start of every disaster movie there is a scientist being ignored. Whether it's Jeff Goldblum in the original Jurrassic Park flick, Dennis Quaid in The Day After Tomorrow or Anne Heche in Volcano, the cinematic take-home is that once we stop listening to our scientific voices of reason, we're doomed unless a red-blooded hero turns up to save us all with good ol' American grit (usually it's Bruce Willis).

Sadly, our real world leaders don't seem to watch too many disaster films: Canadian scientists were muzzled for much of the last decade and tens of thousands of people on six continents joined marches last week to protest the new U.S. administration's apparent anti-science agenda. Science is so under attack these days that Netflix is getting in on the action.

The hypothesis on this one seems to be an attempt to make science "hip," while refuting myths and digging up the truth — Nye is trying to convert the heathens. The end result, however, is a poorly packaged dumpster fire offering basic commentary on complex issues and highlighted by Nye talking down to guests who don't share his views, and yelling at the audience in the most patronizing tone ever. The show is aimed at adults (the aforementioned "sex stew" song), but rarely comes close to exhibiting the depth needed to satisfy anyone with an IQ above that of the village idiot. There are likely some good segments in the 13-episode series but, after suffering through three instalments, I can conclude that if this is supposed to be the salvation of science in popular culture we better just call in Willis. A rare miss for Netflix.

On the big screen, The Circle opens this week at the Whistler Village 8. Emma Watson (Harry Potter, The Bling Ring) stars as the newest recruit at The Circle, the world's most forward thinking tech and social media company (think Apple/Google/Facebook, with a dash of Tesla or Stark Enterprises). Tom Hanks (Big, Forrest Gump) stars as founder of The Circle and he lures our young heroine into an experimental program that not only affects her own life and privacy, but also the fate of humanity.

There were no pre-screenings for The Circle (usually a bad sign, but for thrillers and horror flicks it actually makes sense not to give too much away these days). However, The Circle's Big Brother themes that pit personal privacy against cultural accountability are both timely and interesting. This one is directed by relative newcomer James Ponsoldt (The End of the Tour) and is co-written (and based on the 2013 novel by) Dave Eggers (Where the Wild Things Are). While some of the futuristic tech in the film has already kind of come to be (live broadcasting everyday activities à la Instagram Live), the overall vibe looks creepy enough to make for a decent contemporary sci-fi thriller with real-world implications.

In the era of big data, smart phones and artificially intelligent home appliances, we are constantly giving bits of ourselves to the Internet and the machines so it's always good to consider the potential negative consequences The Circle puts forth. Is the elimination of privacy the only logical evolution of stalking your buddy's new girlfriend on Facebook? And who's making money off it? Big questions and while it's unknown if the movie will answer it still looks worth checking out.

There are no other new flicks in the theatre this week, but there's a special early screening of Guardians of the Galaxy 2 slated for Thursday, May 4 (we'll get into that next week). In the meantime, sticking with a science theme, the Download of the Week is Weird Science, a 1985 John Hughes flick that never gets the credit of his better-known teen dramas, but is actually a lot of fun.

A pair of high school dorks use a computer (and a luckily timed lightning storm) to create their idea of the ultimate woman and bring her to life. It's Frankenstein meets male teenage fantasy filtered through the mind of the guy who made Ferris Bueller's Day Off. No one is splitting the atom with this one, but there is good comedy to be had. I'll take Weird Science and smokeshow Kelly LeBrock over Nye's close-minded rants and Fleshlight raps any day.