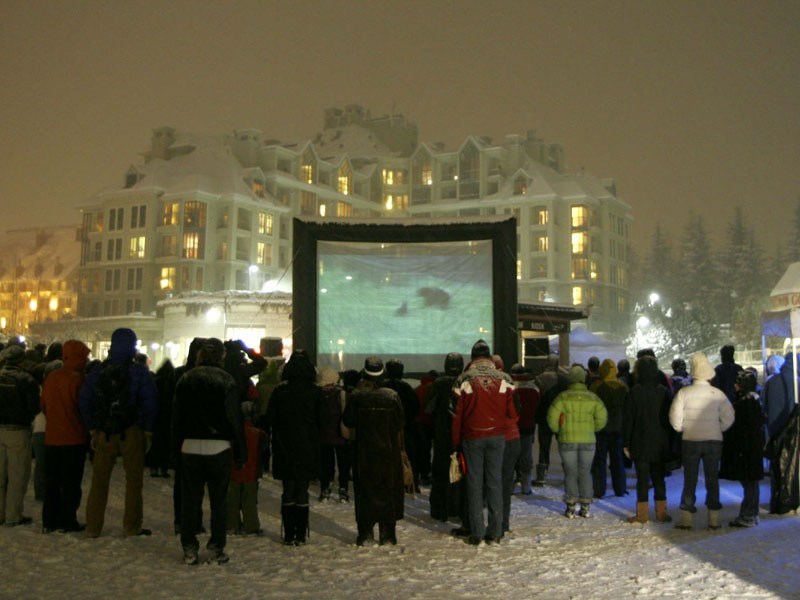 A snowy screening at the 2007 Whistler Film Festival. This year festival-goers get to enjoy films at Whistler Olympic Plaza. Andy Dittrich - wpnn.org

Whistler has a Hollywood bigwig in its corner and this could very well spell success for its film festival.

Steven Gaydos, executive editor of Hollywood trade publication Variety, says that between the timing and location of the Whistler Film Festival, it could become a focal point for industry heavyweights leading into the award season.

"My big hope is that the festival is kind of a central point in the first week of December that links together Hollywood, the greater Canadian industry, the festival of Whistler and the international community that I think is stepping into Whistler," Gaydos says from his Variety office in Los Angeles.

Already the partnership between WFF and Variety has resulted in the festival acquiring advance screening rights to the Jason Reitman film Young Adults. The film's star, Patton Oswalt — who is already generating Oscar buzz for his performance —will receive the festival's Spotlight Award for Supporting Performance of the Year. Variety will also award it's Tech Pioneer award to Andy Serkis, who will appear via Skype form the set of The Hobbit, at the festival this Thursday.

But beyond any of that, Variety's presence at the festival alone lends considerable international profile and credibility to the event. Gaydos says that WFF's scope — with its choice in films, the panels, the industry workshops and discussions — make it an important festival that Variety's readers, i.e. everybody in the American movie industry, will want to know about.

Last week, the magazine published a double page spread about the festival, writing up the festival highlights and its honourees (including Oswalt Michael Shannon, Jay Baruchel and Kung Fu Panda 2 director Jennifer Yuh Nelson), while offering a "Fest Traveler" guide to Whistler, with suggestions on where to eat, where to party and where to relax.

"I think in a line, my goal is that Whistler is discovered," Gaydos says.

He "discovered" Whistler at the 2010 festival, during the screening for Road to Nowhere, which he wrote and produced. He was impressed with infrastructure and potential of the festival, never mind the layout of the town. Couple all that with a two-hour flight from Los Angeles, in the same time zone, and he thought the festival could very well become a popular December destination for Hollywood's elite.

"I just don't think that perception is as clear to people in the industry as it is to me," he says.

For the past year, he has been working with WFF executive director Shauna Hardy Mishaw to secure Variety's presence at the festival moving forward.

"What I'm excited about is there are hundreds and hundreds of film festivals and we have become one of 30 festivals that Variety partners with. That's big," Hardy Mishaw says.

Both Gaydos and Hardy Mishaw want to see the festival gain more traction in L.A. and become a place where contenders for the award season — the late winter string of awards ceremonies that includes the Screen Actors Guild Awards, the Golden Globes and the Academy Awards — to use Whistler as a platform to meet, mingle and show their films.

Hardy Mishaw says, "In terms of what a film festival is, its connection to the industry is absolutely essential to its success, so being able to have a formidable partner like Variety, the timing is fantastic, it's extremely opportunistic and I think that's what's going to drive us forward."