Disney continues its quest for intergalactic dominance this week with the release of Frozen II , which for many kids is more exciting than having Miley Cyrus playing "Baby Shark" on your birthday while chugging bottomless Slurpees and watching your s
Nov 22, 2019 6:00 AM By: Feet Banks 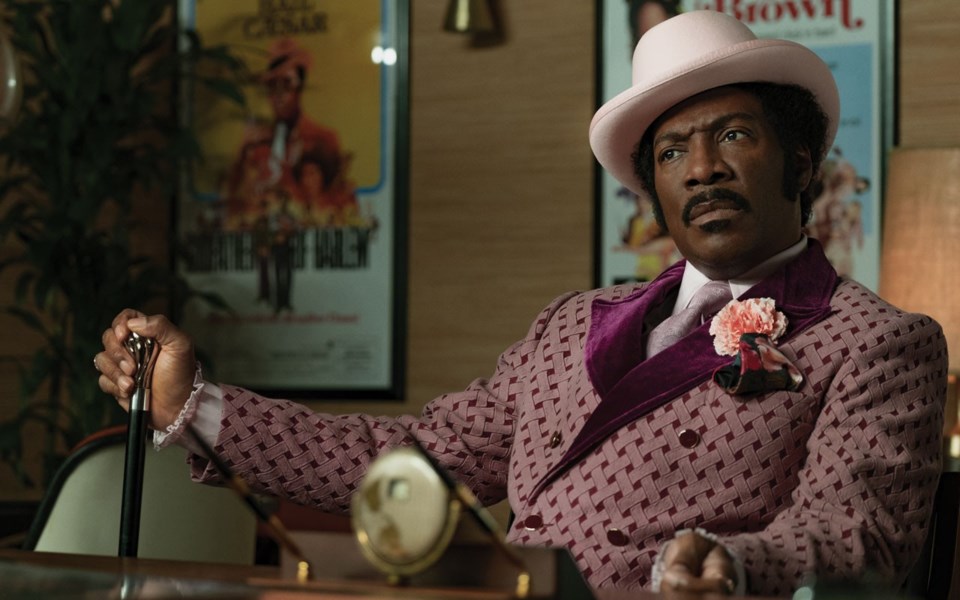 say my name Dolemite Is My Name is now on Netflix. Photo by francois duhamel / courtesy of Netflix

Disney continues its quest for intergalactic dominance this week with the release of Frozen II, which for many kids is more exciting than having Miley Cyrus playing "Baby Shark" on your birthday while chugging bottomless Slurpees and watching your school burn down.

Writer/director Jennifer Lee (Frozen, The Skeleton Twins) is back onboard (co-directing again with Chris Buck) and the duo is hoping they've made the rare sequel that equals the original, and as far as box office receipts go, it just might.

Sister-princesses Elsa and Anna are back singing their snow-pure hearts out, with Anna's boyfriend, his reindeer and the most marketable snowman since Frosty in tow. Sure enough, a mysterious voice/force enters the mix and soon, the world must be saved. Add in an Indigenous-looking tribe (and some kinda fumbled representational sub-themes), plush-toy-ready avatars of the four elements, lots more singing, a fragmented narrative that borders on music-video style in some segments, and well, you got a hit! Kids will love Frozen II because they love anything (and yes, there are enough earworm songs to ruin your holiday road trip).

But Disney isn't stopping there. Their streaming service, Disney+, has pulled ahead of all the others on the strength of The Mandalorian, an episodic story about the adventures of a bounty hunter from Boba Fett's planet. Beautifully shot (my buddy Stu will only watch it in 4k) and served in digestible chunks, this show is already a critical hit after just two episodes. If Disney wants to keep the Star Wars universe going after the upcoming Rise of Skywalker, this is a step in the right direction. There's also a solid series of Pixar shorts called Forky Asks A Question, where the famous fork from Toy Story 4 helps young kids understand things like money, friendship, and cheese. It's actually really good.

Disney also owns the Marvel universe and top Marvel exec Kevin Feige has said that true fans will want to stay up to date on all the upcoming Marvel shows on Disney+ if they want to fully understand what's happening in future theatrical releases. It's brilliant marketing, but aside from teenage fanboys, who has the time? Contrary to almost everyone I meet and record box office numbers, I think The Avengers franchise sucked, and part of the reason was that old farts like me don't have the energy to give two shits about C-rate characters like the Scarlet Witch, Hawkeye or Vision, no matter what hot acting talent you slide in there. To have to watch an entire series about Vision and the Witch just to be able to appreciate the next Spider-Man flick, no thanks?

Sticking with streaming (because it seems to be the future of decent cinematic storytelling), Netflix dropped Dolemite Is My Name a couple weeks ago and it is the tits. Eddie Murphy stars as Rudy Ray Moore, a struggling entertainer who found fame in the '70s with raunchy comedy albums, raps and films. Set during the crossover period from hit comedian to film star, Dolemite Is My Name also features Wesley Snipes, Keegan-Michael Key, Craig Robinson, Mike Epps, Chris Rock, T.I. and Da'Vine Joy Randolph in a tale of believing in yourself and your community, working hard, and the power of shit-talking. Rudy Ray Moore was an icon in the black community (many credit him as the godfather of rap) and this is a fun, funny, and heartfelt story that deserves a wider audience. Murphy slays.

Netflix is also dropping Dolly Parton's Heartstrings on Nov. 22. It's a series of eight 60-minute narrative shows inspired by songs in Dolly's catalogue. True to brand, Dolly is aiming for good family entertainment (think Forrest Gump-style innocence) and will pop up on screen herself from time to time. Dolly is one of the greatest songwriters ever (her song "I Will Always Love You" went to No. 1 in three consecutive decades) but many forget she has acting chops, too (9 to 5 is a kickass movie). She's enjoying a huge popularity boost of late (find the podcast Dolly Parton's America; it's fascinating) and this series should sizzle (also Julianne Hough plays the waitress in the Jolene episode).

Back on the big screen, Tom Hanks stars in Won't You Be My Neighbor?, the Mr. Rogers movie. Back in the days when kids got their wisdom from people instead of forks, Mr. Rogers changed the world. This movie will be excellent.