Even without the recent election down south in Gilead, the state of affairs these days might lead one to think life is nothing more than a dark, nasty place ruled by the filthiest human tendencies—greed, ego, narcissism, fear.
Nov 14, 2018 5:00 PM By: Feet Banks 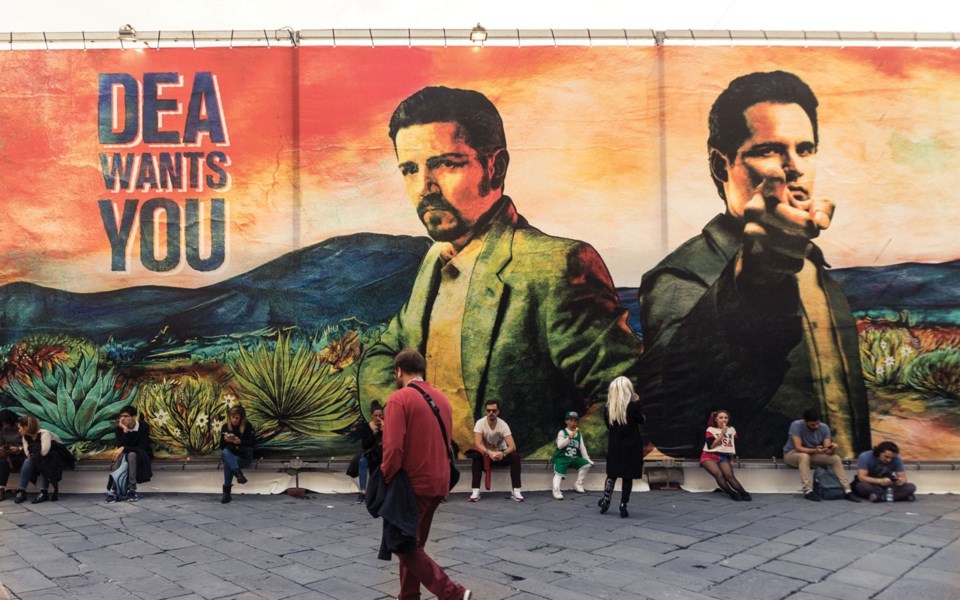 Even without the recent election down south in Gilead, the state of affairs these days might lead one to think life is nothing more than a dark, nasty place ruled by the filthiest human tendencies—greed, ego, narcissism, fear.

That civilization is little more than a living toilet bowl filled with vomit and excrement, so clogged and un-flushable that the only possible future is to spill over the edge of the cistern and putrefy whatever lies beyond...

Of course, the other perspective is that the sun is shining somewhere, the hour is always darkest before the dawn, and it's a helluva good week to have a Netflix account.

This Friday marks the return of Narcos for a fourth season, with the action shifting to Mexico in the 1980s and the apparent "birth of the Mexican drug war."

Billed as a "companion series" to the original story, this arc stars Michael Peña (American Hustle, Ant-Man, A Wrinkle in Time) as a DEA agent up against Diego Luna (Y Tu Mamá También, Milk) as the man that unified the traffickers and built the Guadalajara Cartel.

Netflix has been pretty tight-lipped beyond that, but one bright spot is that directorial team for Narcos: Mexico includes Andi Baiz, the Colombian director who helmed several of the episodes of the initial three seasons, and Mexican directors Amat Escalante (who has tons of true crime, action experience) and Alonso Ruizpalacios (who brings a more character-driven style to the team).

Narcos matters because the original run was essentially a foreign-language import that North American audiences couldn't get enough of. (That the series was about America's insatiable appetite for imported cocaine only makes it that much more poetic.)

Also dropping this Friday, The Ballad of Buster Scruggs sees legendary American auteurs Joel and Ethan Coen playing in the Netflix sandbox for the first time. And the result is a six-episode, 132-minute Western anthology that conglomerates everything that makes the genre great—then shoots it all to hell.

The segments are related by style and theme rather than story, and by the end, one might wonder if the Coens don't see the world a bit like the opening of this column—lot of dark themes here: the brutality in pursuit of wealth, the treachery of deceit, the futility of standing alone. And yet for all the solemnity, the Coen bros are so damned good at movie making that Buster Scruggs is also funny and mischievous. Along with the gunsmoke and (literal) gallows humour there are classic vistas, perfect characters and maybe even a few pans of gold. The Coens are playing around here, with structure especially, and having their own brand of dark, brooding fun.

The Flashback Flick of the Week is Criminal, a grossly underrated, Steven Soderbergh-produced 2004 con-artist flick starring Diego Luna and John C. Reilly (Boogie Nights, Talladega Nights) as a pair of hustlers working on that "score of a lifetime." Maggie Gyllenhaal (Secretary, Donnie Darko) also stars and this one sucks you in with solid performances, great writing (it's an adaptation of an Argentinian film called Nine Queens), and leaves you checking your pockets—the perfect score.

Fans of film classics probably already know, but Netflix also has The Other Side of the Wind, the last film from Orson Welles (Citizen Kane, Touch of Evil). Welles' first movie is still considered by many to be the greatest of all time and with that kind of pressure to perform, it's no huge surprise the rest of his career struggled.

The Other Side of the Wind took over a decade to film and edit and was plagued with financial difficulties and disagreements. And things got worse after Welles' death in 1985, when legal battles, family squabbles and general unfriendliness prevented anything from happening until 1998, when cooler heads prevailed and Peter Bogdanovich (The Last Picture Show, Runnin' Down a Dream) eventually finished his old friend's film.

Decades later and, somehow, Netflix has nabbed not only The Other Side of the Wind, but also They'll Love Me When I'm Dead, a documentary outlining the film's journey into existence. (Watch the doc first, I say.)

Interesting side note, one of Orson Welles' last jobs was to voice Unicron, the planet-destroying robot in Transformers the movie. I'm not saying Welles envisioned the inevitable life-destroying doom of humanity's obsession with technology and gadgets built to "connect us all," but Unicron devoured realities and that's a pretty kick-ass way to go out.