One interesting thing about movies like The Dark Knight Rises — big summer blockbusters with budgets the size of Godzilla's nuts and hype more colourful than Mothra's wazzoo — is that the studios honestly expect these flicks to crack into
Jul 18, 2012 9:00 PM By: Feet Banks 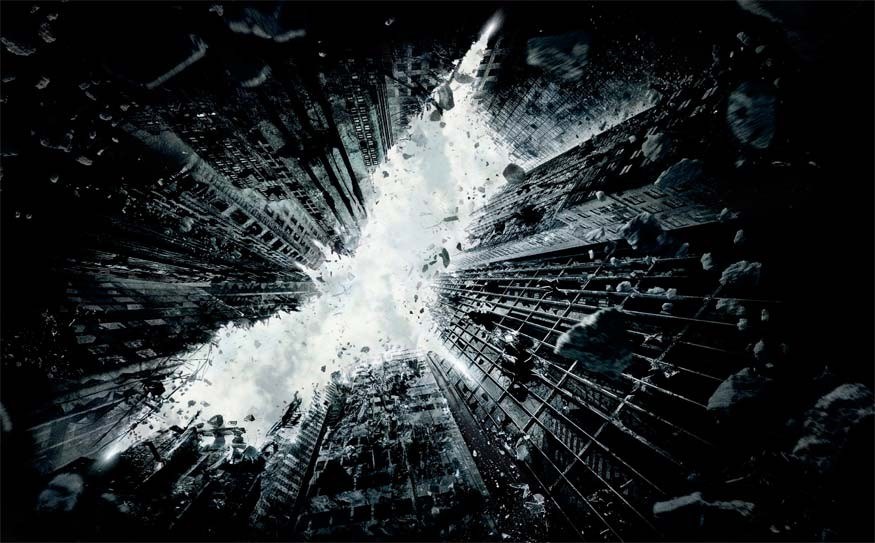 One interesting thing about movies like The Dark Knight Rises — big summer blockbusters with budgets the size of Godzilla's nuts and hype more colourful than Mothra's wazzoo — is that the studios honestly expect these flicks to crack into the top 10 highest grossing films list. And that is a pretty tall order.

The Dark Knight, director Christopher Nolan's last Batman film, peaked at number 12. Not bad for a comic book movie but no longer good enough because Marvel, the true arch-nemesis of DC (aka Detective Comics, where Batman first appeared in 1939) has already hit third spot on that movie money list with The Avengers, released in May (Marvel introduced their first Avengers comic in 1963). So the DC/Marvel rivalry has been going on for about a human lifetime and this summer we're getting the money round.

And it's a street brawl. The Dark Night Rises is bone-crunchingly tough, dark, grim and full of things that go bump in the night. Batman (Christian Bale) has been in hiding for eight years. "The Dent Act" has cleaned up Gotham City's crime so he's less needed, but Bruce Wayne is still a bit pissed about the self-excommunication Batman had to pull after Harvey Dent/Two-Face was painted as a hero (at the end of 2008's The Dark Knight).

That all changes with the arrival of a hot chick in a tight black outfit (Anne Hathaway) and a delusional super-menace named Bane (Tom Hardy from Inception, Warrior). Cue all kinds of well-executed terror as Batman is forced out of retirement to try and salvage the unsalvageable. Can Gotham City be brought back into the light? Can Batman?

Chris Nolan (Inception, The Prestige, Memento) is known for making "intelligent" action flicks and amidst his violent ballet of awesomeness he pushes/drags the audience through the pros and cons of vigilantism while simultaneously playing on socialist themes about the redistribution of wealth, mashed into still-lingering post-911 anxiety. He also tosses in a bit of Rocky 4 to keep things fun.

Even at 2.5 hours The Dark Knight Rises is superbly made, incredibly acted, half-decently written (work on the one-liners, boys) and really quite a spectacle. Maybe not super subtle with the thinking bits but really, in this day and age can you afford to be? (Not when you're expected to bring in a billion dollars, you can't.)

And so a rivalry started in four-colour "Kid mags" made decades before most of us were born culminates this summer as hundreds of millions of dollars of special effects and some of the finest talents in filmmaking duke it out on silver screens around the globe.

But it shouldn't be about the money. Film is really about shared moments and the way we perceive ourselves. To sit in a dark theatre and watch the same movie millions of others are watching at the same time is good for our psyche because sharing a moment with another human being, even a laugh or sudden scare in a movie theatre, allows our brain to understand that we are not alone in life, that others see things the same way we do. This keeps us sane, keeps us soldiering on.

If we lose those shared moments, where art bridges the gap between two separate entities, our psyches start to float into solipsism, a self-centric mental state that isn't that far off from villains like Bane or The Joker or oil executives who will happily risk an entire ocean coastline to make a few bucks. Collectively, we have to watch movies, read books and listen to rock and roll or else the world will fall into madness, violence and solipsism.