Another week, another horror movie. Hollywood always seems nervous about releasing their marquee flicks during these last few weeks of summer holidays.
Aug 29, 2019 8:30 AM By: Feet Banks 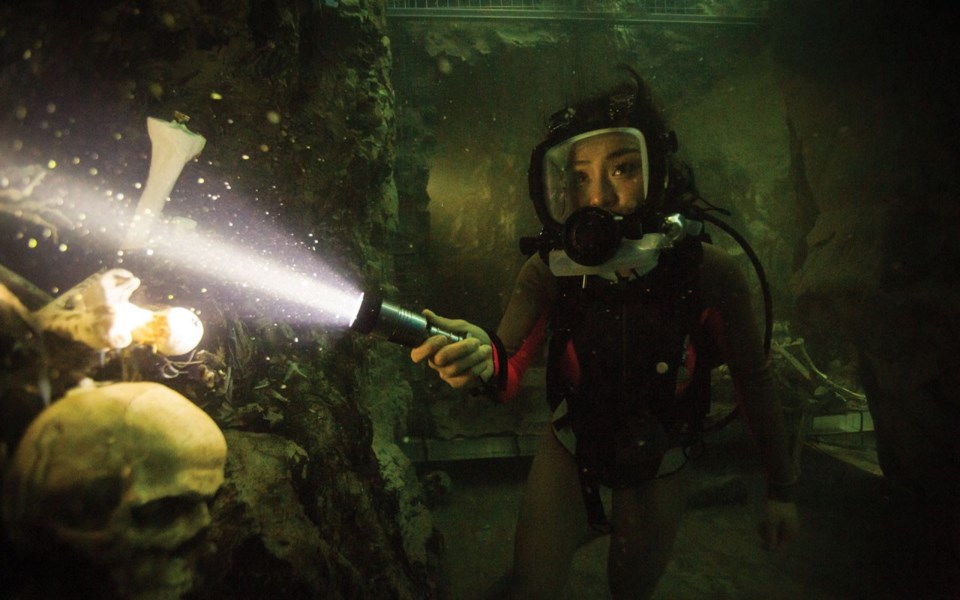 Another week, another horror movie. Hollywood always seems nervous about releasing their marquee flicks during these last few weeks of summer holidays.

Maybe they figure the kids are broke and the rest of us don't have time for the theatres because we are so goddamn busy trying to cram all our unrealized summer plans and dreams in while we can.

And they're not wrong, but with a lack of superheroes and big franchise tentpoles, these dog days of summer actually end up offering some of the most original and enjoyable flicks of the summer, especially if you like horror. Last week's Ready Or Not was a killer horror comedy and the good times continue this week with 47 Meters Down: Uncaged.

First off, it's a shark movie, so that's a win. Beyond that though, it's a SCUBA diving shark movie about four teenage girls stuck in a sunken Mayan temple/maze/deathtrap and director Johannes Roberts is back on board (remember the first 47 Meters Down, with Mandy Moore stuck in the shark cage and running out of air? It ruled).

Uncaged brings a bigger budget, more victims, more sharks, and more of that dualism claustrophobic/agoraphobic tension that comes from being trapped in a small space, but surrounded by dark open nothingness, with teeth.

Certainly, this is not an intelligent film, or even a particularly good one (dialogue and characterization definitely lack), but at 89 minutes it's a nice little creature feature with a decently unique premise (for a shark movie). 47 meters Down: Uncaged is rated 14-A for gore and shark-human-blindness.

Also opening this week, also rated 14-A, Good Boys is another kids-talking-shit-while-coming-of-age comedy in the vein of Superbad (this one is actually produced by Superbad power duo Seth Rogen and Evan Goldberg).

This time the story revolves around a trio of 12-year-olds on a quest to learn how to kiss a girl so the one kid can go to a cool party and get the cool girl.

As expected, their quest for knowledge goes terribly awry and soon the kids are on the run (from cops and teenage girls), with a bag of accidentally stolen drugs to boot.

The directorial debut of Gene Stupnitsky (he co-wrote Bad Teacher), this one banks pretty heavily on the classic raunchy trope of good kids saying bad things, but there are real conflicts and messages in there too (peer pressure, divorce, bullying, the unease of maturing at different speeds than your buddies).

Backed by incredibly strong performances by the main trio (Jacob Tremblay, Brad Noon and Keith L. Williams), as a raunchy comedy Good Boys also seems downright modern in its refusal to objectify/degrade women (nice to see consent playing a role in the plotting).

All in, this flick is worthy, pretty funny, and exactly the kind of movie a 13-year-old kid should be trying to sneak into this summer.

Speaking of Rogen and Goldberg, they also executive produce Black Monday a 10-episode, shock comedy take on the infamous 1987 stock market collapse. Starring Don Cheadle (Boogie Nights) as a renegade leader of a second tier Wall Street Trading firm in the year leading up to the crash with Regina Hall (Girls Trip) as his left-hand woman, this one comes out of the gates swinging with some really smart and offensive humour, but it peters out as the series progresses.

Still worth it for the performances and awesome '80s style (and the stretch Lamborghini limo, the "Limbo"), Black Monday is available on Crave/HBO. Crave is also home to Punk, a four-part doc series about the history of punk music that's executive produced by founding father of the artform, Iggy Pop.

Featuring many of the genre's key players (everyone from Johnny Rotten to Marky Ramone to Debbie Harry to Legs McNeil to Jello Biafra to Fat Mike), Punk is a fairly standard bit of nostalgic navel gazing (which seems a bit un-punk), but it's also super charismatic and highly informative if you are unfamiliar with the genre.

My favourite part is when they have all these punk legends listening and reacting to each other's records.