The freaks come out at night, but the real freaks come out these nights, this week of the year. Halloween is here so stock up on chicken and lube.
Oct 25, 2017 6:00 PM By: Feet Banks 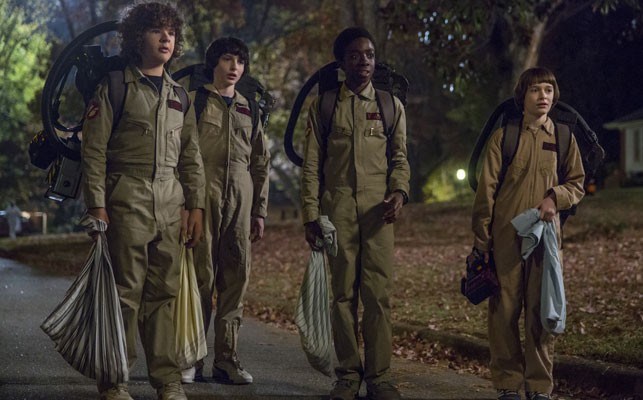 The freaks come out at night, but the real freaks come out these nights, this week of the year. Halloween is here so stock up on chicken and lube. And actually, don't worry about the chicken, because Stranger Things 2 drops this week and it's gonna be tight.

Winona Ryder is back, as are all those kids (kids shouldn't be celebrities so I'm not gonna list their names) and with a bigger budget than Season 1, the Duffer brothers are coming in hot. Granted, this season won't benefit from that underhyped surprise factor of the first season but it doesn't matter, we're hooked. The '80's are on fire these days and Season 2 is all the synth, Stand By Me, Gremlins, Poltergeist and D&D you didn't even realize you were missing. The 'upside down' is inside out, and creators Matt and Ross Duffer deliver a fresh, tense series that still gives you stuff to think about. Stranger Things is legit.

At the Village 8 (who deserve an extra tap on the back for the kickass horror marathon earlier this month), there's a Coen brothers-George Clooney mash-up opening this week called Suburbicon. Written by the Coens in the late 1980s, then shelved for decades, Suburbicon is a bit of an awkward mash-up of two competing storylines, and you can't help but wonder if it isn't director Clooney's fault.

On the one hand, the main story is a throwback to an idyllic 1950s suburban neighbourhood thrown into disarray by a grisly murder. A young boy slowly comes to the realization that his father (Matt Damon) may have murdered his mother (Julianne Moore) so he could hook up with her twin sister (also Julianne Moore) amidst problems with some mob goons and "just-doing-their-job" cops.

It's all dark comedy and shaded motivations, except there's a subplot, perhaps added by altruistic Clooney in an attempt to add social relevance to a character-driven crime story, about a black family who moves into the all-white suburb, which upsets the residents more than the fact that there seems to be a murderous psychopath among them. None of this subtheme shows up in the trailer, but Clooney plays these racially-charged scenes a bit too straight and the tone doesn't seem to match the usual madcap Coen energy. Suburbicon is a bit of a mess, but it's still (at least half) a vintage Coen brothers movie at times, especially when Oscar Isaac shows up.

Interestingly, the Coen brothers are the latest directors to dip their toes in the Netflix pool — they've signed on to create a six-episode Netflix original anthology of Western stories called The Ballad of Buster Scruggs. Arguably the most unique and talented directors of their generation (Fargo, The Big Lebowski, Barton Fink, O Brother Where Art Thou, No Country for Old Men, Raising Arizona, etc.), it will be awesome to see what they do with the time and space allowed by a six-episode series. It drops sometime next year.

Back in the present, Netflix is releasing parts 4 through 7 of Friday the 13th this week and the Village 8 is opening Saw 8 (aka Jigsaw). There were no pre-screenings but even if you haven't been dripping with anticipation for yet another entry into the torture-porn Saw franchise, this one looks pretty badass (if you can handle the uncomfortable depravity of human suffering played for entertainment). Regardless, Canadian icon Callum Keith Rennie (Hard Core Logo) stars and the Spireig brothers (Daybreakers) direct. Go get some.

As a co-organizer of the old Heavy Hitting HorrorFest, I have to apologize that there is no show this year. Here are the titles of all the films we will not be showing: Chartreuse Vâgine; Trailer Park Time Machine; Yeast Infection at a Brewery; Cradle Laid-eler 3: Sexual Soup Kitchen; Circumflexercize; Fuccuum: The Succubus; Meat Me at the Joinery; Cleave it to Beaver; Last Teepee on the Left; and Saw 19: SpongeBob Fury Pants, which local director Liz "TTAF" Tucker claims is "like The Human Centipede meets The Abyss but set in a soft-serve ice cream parlour."

Creativity knows no limits, and we miss you, Chili Thom. Happy Halloween, everyone.