Groundswell: a surf movie with a message

The documentary screens in Whistler as part of Art For an Oil-Free Coast's opening night
Feb 27, 2013 8:00 PM By: Alyssa Noel 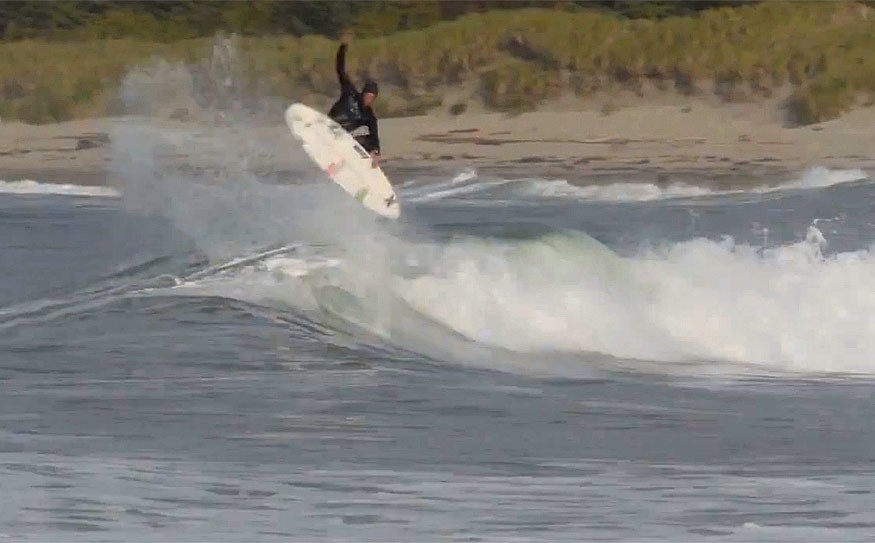 The group included three world-class southern California surfers, including filmmaker Chris Malloy, along with Canada's top-ranked surfer, Pete Devries, and a crew to capture the action. The goal: to help spread the message about the foundation's campaign to stop Enbridge's proposed tankers from moving into the Great Bear Rainforest.

"It hit me one day in the water that giving voice to other marine life at risk through surfing would be a pretty compelling idea," says Darimont, who is also a professor in the University of Victoria's geography department. "After all, I think we surfers are about the closest thing to marine mammals among humans, so I thought, 'Why not.'"

The group spent 10 days surfing, camping and exploring the virtually untouched area, while Malloy filmed. Besides surfing alongside his brothers, Malloy has established himself as a surf filmmaker who shifted the genre from purely visual to include a deeper social or ecological message, Darimont says. "It was a great fit," he adds. "He had never been up to Canada before. He came up for a scouting trip and he was blown away. He and I became fast friends and he assembled a whole team that volunteered for this."

They were especially blown away by the contrast between their surf spots in California — lined with oil plants and highways — and the rugged coastline in B.C.

"The California guys came up without knowing a great deal about (the Enbridge proposal)," Darimont says. "But they listened to probably the most important voices and that wasn't scientists, academics or conservationists. The voice they listened to most intently was... local indigenous leaders and youth."

The resulting 25-minute documentary, Groundswell, reflected those voices too. It also offers a stunning depiction of picturesque landscape populated by grizzlies, salmon, killer whales and a host of wild animals rarely seen by humans. The whales, especially, were a treat, Darimont says.

The crew had gotten up early one morning in hopes of surfing while the swell and tide were at their prime. Instead they spotted a pod of the killer whales and spent hours watching them move through the area.

"These pro-surfers who came to surf and we all decided to spend the morning with those whales," he says. "Any trip up there is magical because the place is so magical. This (trip) especially because it combined my life passions: one is conservation science and the other is surfing. To do both things at once and also with my heroes of the surf world — guys I grew up reading about in magazines — was a total thrill."

Since they finished the film in November, they've toured the documentary down the coast to California, urging Americans to contact their decision makers and voice their opposition to the tar sands, bitumen from which the proposed tankers would carry. It has also screened at the Vancouver Film Festival and in select locations across Canada.

"One of the things we're trying to do is engage a whole variety of communities," says Brian Falconer, marine operations program coordinator for the Raincoast Conservation Foundation, who also went on the trip. "It's just an absolutely amazing film. It's had fantastic responses."

The film is currently touring with the Art for an Oil-Free Coast exhibit, which will stop in Whistler on March 4. "I think we're achieving our goal," Darimont says. "We set out to inform and inspire people, to raise awareness and inspire action."

If you can't make it to the local screening, the film is also available for purchase or rent at thesurfnetwork.com. Those interested in screening it for an audience can also inquire about screening kits at raincoast.org.