Christmas movies almost always suck. For every Gremlins or Scrooged, there are literally dozens of crapfests like Christmas with the Kranks, Four Christmases or Just Friends ( Whatever happened to Amy Smart anyhow?).
Dec 2, 2015 5:00 PM By: Feet Banks 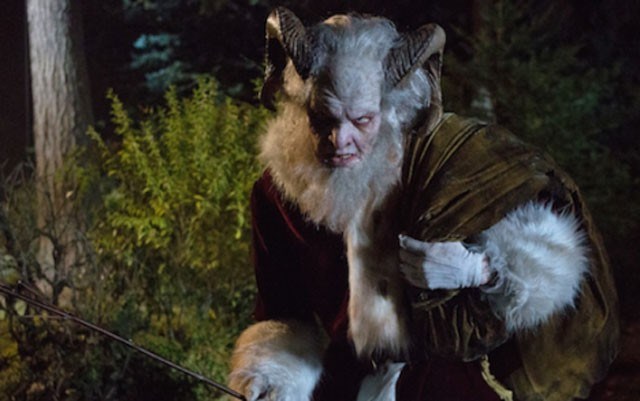 Christmas movies almost always suck. For every Gremlins or Scrooged, there are literally dozens of crapfests like Christmas with the Kranks, Four Christmases or Just Friends (Whatever happened to Amy Smart anyhow?).

But Hollywood keeps pumping out holiday flicks and every once in a while they get one right. But two decent Christmas movies in the same year, that only happens once a decade or so. The year 1988 saw both the Bill Murray masterpiece Scrooged and Bruce Willis' classic Christmas actioner Die Hard. In 2003, both ends of the yuletide spectrum produced hits with the feel-good, Will Ferrell-driven Elf, and R-rated Billy Bob Thornton (post-Angelina, pre-Q meltdown) in Bad Santa. And now in 2015 we're double dipping again as last week's drug-fuelled comedy The Night Before is joined by Krampus, a Christmas horror flick opening this week at the Village 8.

Where us North Americans have Santa Claus with his merry band of weakling Elf-on-a-Shelf snitches to help frighten our kids into good behavior, European spots like Germany, Slovenia and Austria have a horned, goat-hooved, hairy demon from hell who beats naughty children with sticks and rusty chains before stuffing them into a bag and dragging them off to whatever fiery pit of doom their little imaginations can conjure. Over there, Krampus is as real as St. Nicholas and has been around just as long.

Krampus also has his own night, Krampusnacht, held Dec. 5, and in some places his own sort of parade, Krampuslauf, which sees scores of drunken Euros running through their villages in super elaborate Krampus costumes while onlookers pound Schnapps and children cower. It all sounds very awesome.

And North America finally gets in on the action with the (conveniently timed Dec. 4th) release of Krampus, a cautionary tale about a young boy who turns his back on Christmas and unleashes an ancient evil that forces his family to find solidarity, or die.

There were no pre-screenings for this one (a good sign with horror flicks), but Krampus is directed by Michael Dougherty, who wrote X2: X-Men United and surprised everyone with Trick 'r Treat, his better-than-expected directorial debut. Krampus also has a solid cast to work with: Toni Collette (Little Miss Sunshine) brings the terror alongside Adam Scott (Piranha 3D) and perennially funny David Koechner (Anchorman). Christmas traditionalists will probably hate this one, but don't hate too much or Krampus will get ya.

There is nothing to hate about the 15th annual Whistler Film Festival, which brings 89 films to town this weekend for four days of pure cinematic bliss. Every movie is worth seeing but here are a few highlights from the back row:

Al Purdy Was Here is a tribute documentary to Purdy, a Canadian literary icon (many consider him Canada's Bukowski) but also a throwback to a time in this country when culture and arts played a more significant role. Mixing a ton of incredible archival footage with a contemporary story about restoring Purdy's old cabin as a writer's retreat, this one features performances from some Canadian greats as they pay tribute to a true legend. Al Purdy Was Here plays Friday and Saturday at the Village 8.

On the surface, Love, by Argentinian provocateur Noé Gaspar (Irreversible) is a simple relationship story where the relationship is going downhill. But Gaspar doesn't simply tell stories, he shovel-punches them into your psyche. As such, Love also features painfully long takes of non-simulated sex shot in an overhead, bird's-eye manner that almost redefines voyeurism, especially since Whistler Film Fest is screening it in 3-D (watch for that money shot!). This one will make a lot of people uncomfortable, but isn't art supposed to do that sometimes? Love plays tonight (Thursday) at the Village 8. Adults only.

On the local front, Anthony Bonello's short film Eclipse chronicles photographer Reuben Krabbe's quest to shoot a near-impossible photo of a skier ripping under a full solar eclipse. Voyaging deep into the Arctic Circle on a hope and a prayer, Krabbe's money shot is also pretty noteworthy. Eclipse plays alongside Hokkaido Backcountry at 3:30 PM today (Thursday) and 2:15 on Sunday at Maury Young Arts Centre (the new name for Millennium Place).

As well, local director Angie Nolan and tour-de-force Sharai Rewells are finally able to share their short, The Twisted Slipper, with the hometown crowd. Created as part of the Crazy 8s film competition last year, this one played at the Cannes Film Fest and is a great example of how the Whistler film scene has matured since WFF came to town. The Twisted Slipper plays as part of the Shortworks Showcase on Saturday Night at Garfinkels. Movies in the bar! Whistler Film Fest! Krampus!