Watching movies and smoking cannabis is a time-honoured tradition (pro tip: skip the soda and get an extra bag of M&Ms) but the big weed news this week is that THC has officially infiltrated the Oscars. Vox.
Feb 22, 2019 4:00 AM By: Feet Banks 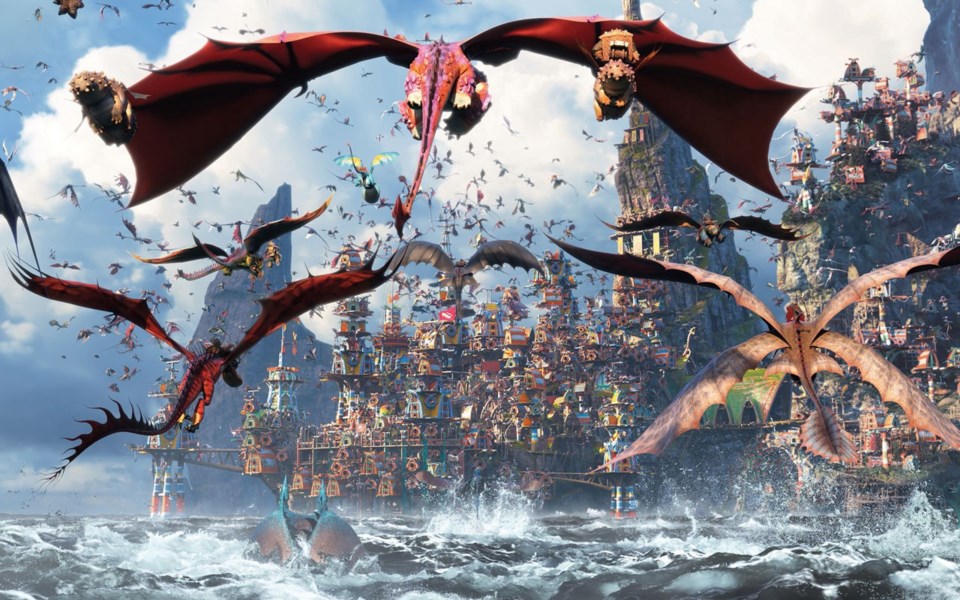 up in the air If you need a break from the Oscars this weekened, check out How to Train Your Dragon: The Hidden World . Photo Courtesy of Dreamworks Animation

Watching movies and smoking cannabis is a time-honoured tradition (pro tip: skip the soda and get an extra bag of M&Ms) but the big weed news this week is that THC has officially infiltrated the Oscars.

Vox.com is reporting that celebrity swag bags for nominees in the acting and directing categories will contain THC-infused chocolates and CBD skin creams, reportedly to help with the anxiety of being rich, famous and up for your industry's top award. So smoke 'em if you got 'em this Oscar night (Sunday) and watch for glazed eyes on those celebrity cutaway crowd shots.

As for who's gonna win? Academy politics and selections are notoriously difficult to understand (also, I didn't see all the nominated movies this year) but if you want to roll the dice on your Oscar ballots, here are a few semi-educated guesses from the back row.

The favourite rolling in is Rami Malek for portraying Freddie Mercury in Bohemian Rhapsody (Malek was great, the only hitch is that's not his real singing voice but rather a digital construct). The dark horse is Christian Bale for Vice but I kinda think Bradley Cooper might win for stealing Sam Elliot's voice in A Star is Born. (Also, a sympathy nod for not nominating him for best director).

This race is a lot tighter, with newcomers Lady Gaga (A Star is Born) and Yalitza Aparicio (Roma) making strong runs. Olivia Colman is probably most deserving of the award, but the smart money is on Glenn Close for The Wife. Did anyone see that one? It doesn't matter; expect the Academy to give it to Close as a sort of lifetime achievement vote.

My pick is BlacKkKlansman but the surprise upset will be if the Academy gets over their Netflix bias and gives it to The Ballad of Buster Scruggs. Realistically, the best script of the year wasn't even nominated: Spider-Man: Into the Spider-Verse.

You'd think this one is linked to whatever takes Best Picture, but I don't think that will happen this year, so the frontrunners here are The Favourite and Green Book. My money is on Green Book.

Marvel always wins this one and Avengers: Infinity War is a top pick in many circles but I'm hoping Steven Spielberg's team takes it for Ready Player One. Or even the crew at First Man—anyone but the crappy Avengers.

Hard to beat Roma on this one. Emmanuel Lubezki is one of the best of all time.

Tricky category because the nature of editing is to make it unnoticeable. Bohemian Rhapsody is a contender here (despite being panned on the internet with a clip that does seem pretty shittily edited). I think Vice is gonna take it.

Has to be Spider-Man: Into the Spider-Verse. That movie changed the artform (and was one of the best movies of the year, animated or not). Pixar's Incredibles 2 made a shitload of money though, and Hollywood loves money.

Free Solo, the Jimmy Chin/Alex Honnold doc is the favourite after a big BAFTA win, but Bing Liu's coming-of-age, skateboard flick Minding the Gap is one of those docs that only comes around once a decade. It deserves the statue.

Alfonso Cuarón probably gets this one but I'm thinking the Academy might just pull a fast one and honour Spike Lee (BlacKkKlansman), not just for this film but because he's strung together an impressive 30-year career with no prior recognition. (And let the record show that Inside Man is a perfect heist film!) Giv'r Spike!

I wish Black Panther could win because it was the most fun (or even BlacKkKlansman) but the Academy is probably gonna go the other way and award the cinematic artistry of Alfonso Cuarón's Roma. I'll be really surprised if A Star is Born wins (even though it was pretty good for a musical) but Hollywood loves movies about stars, so you just never know.

If you're skipping the Oscars, the new flick at the Village 8 this week is How to Train Your Dragon: The Hidden World. Offering cartoon salvation after the disappointment of The Lego Movie 2: The Second Part, this one is more of the same from the same reunited talent. And that's a good thing.

In other news, the trailer for The Dirt, the Netflix Motley Crue movie, dropped on Tuesday. Based on one of the greatest rock 'n' roll books ever made, this one has potential but the trailer gives me cause for worry. Time well tell because the flick drops March 22 on Netflix, and we'll get into rock 'n' roll movies in more detail next week. Giv'r!