If looks could kill... 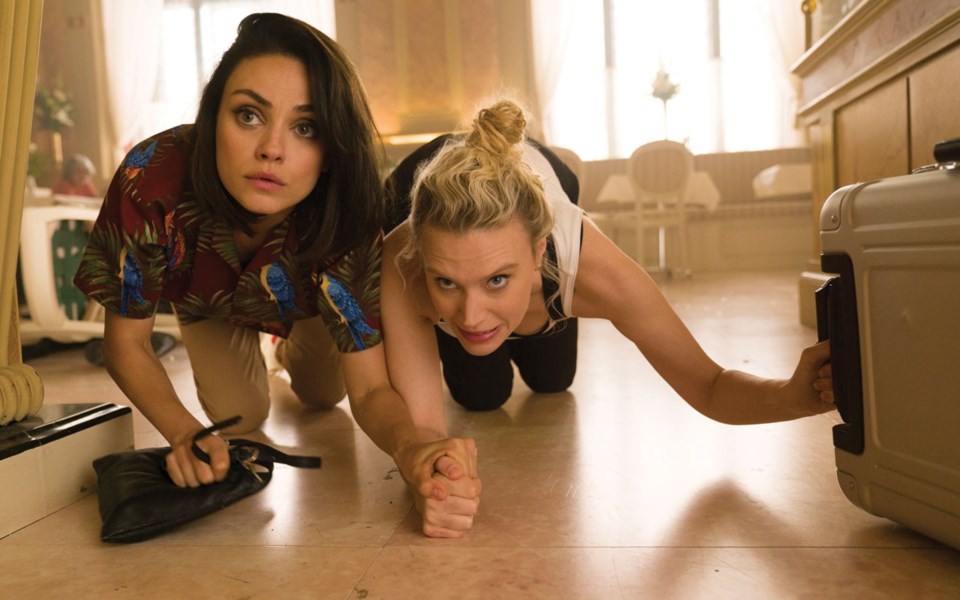 I spy Catch the buddy comedy The Spy Who Dumped Me , opening this week. Photo by Hopper Stone copyright Lionsgate Entertainment

There can ever be only one Angelina Jolie.

And while scientists are constantly getting closer to cloning humans (they can already clone pets: Barbra Streisand did it; it cost $50,000) there is also mounting empirical evidence that cloning Angie would actually spell certain doom for all of humanity. The atmosphere would ignite like a lit fart and that would be the end of all of us—she's just too hot; there can be only one.

However, the next best (safest) thing is already walking among us. Mila Kunis actually played a younger version of Angelina Jolie in Gia (which, if you haven't seen, you really ought to). And while Mila is also atmospherically dangerously hot, what keeps us all safe is that the movies she makes aren't quite to Angie's calibre. And the proof is in the custard this week with The Spy Who Dumped Me, a fish out of water, espionage, buddy comedy opening Friday at the comfortable-in-any-climate Village 8.

Kunis (Black Swan, Forgetting Sarah Marshall) stars as a not-where-she-dreamed-she'd-be-at-30 cashier at Trader Joe's. Her boyfriend just dumped her via text and Kate McKinnon (SNL, Ghostbusters) is the best friend consoling her. Except they discover the boyfriend is a spy, get sucked into some spy vs. spy shit, jet over to Europe and the hijinks proceed from there.

Kunis excels, somehow, at playing the slacker girl-next-door type (blame it on That '70s Show). Here, her main job it playing it straight to McKinnon's madness. McKinnon has that classic-era Jim Carrey ability to command attention in the strangest ways, but Hollywood still hasn't figured out how to properly utilize her. They don't quite nail it here, although director Susanna Fogel (Life Partners) gives her more room to breathe than usual, and that's a good thing. The McKinnon-Kunis chemistry ain't bad.

Amidst a firefight of flawed love interests, subverted spy clichés, and actual firefights, the duo shines a light on the value of friendship and how women can achieve anything, good or evil.

With goofy action, slick Euro locales, and unrealism at every turn, The Spy Who Dumped Me is silly and it's not going to change anyone's life (plus, it's at least 10 minutes too long), but for a couple chuckles on a date where you're in the right mind-frame for the large popcorn with M&M's chucked in...it plays.

The good news is Jennifer Yuh Nelson (Kung Fu Panda 2 & 3) has a new flick out, which means two of three new releases this week were directed by women and maybe Hollywood is making progress on their sausage party problem.

The Darkest Minds had no pre-screeners, but it looks like a pretty kick ass teen sci-fi story about a bunch of kids with superpowers getting screwed over by the government/adults/everyone ... and then fighting back (and falling in love, of course).

Produced by the people behind Stranger Things and Arrival and with Yu's deft skills at creating character, this one should play well.

Also opening (without pre-screeners), Christopher Robin stars Ewan McGregor (Trainspotting, The Phantom Menace) as the titular character, now grown up, who is visited by his old pal Winnie the Pooh and the gang...kill me now.

I'm likely in the minority here, (and I'll never understand why) but I'd rather eat a plate of fresh cat hairballs than sit through any film with Winnie the Pooh.

On the small screen (Netflix), Tasmanian stand-up comic Hannah Gadsby has a punchy new special out called Nanette. Known for self-deprecating "lesbian humour" (homosexuality was illegal in Tasmania until 1997), in this one Gadsby plays to expectations at first, then begins taking shots at everything from the idea of fine art, creative genius, mental illness, and the deep-rooted patriarchal system of oppression that is still very apparent today.

By the end of her show Gadsby has deconstructed what comedy is, and how it fails us by often omitting important parts of the story. There are some real laughs in Nanette, many of them uncomfortable, but the true value here is how Gadsby makes us question things we too often brush off or hide with humour.

Shots fired, Nanette is no joke.