'In their Skin' for Halloween 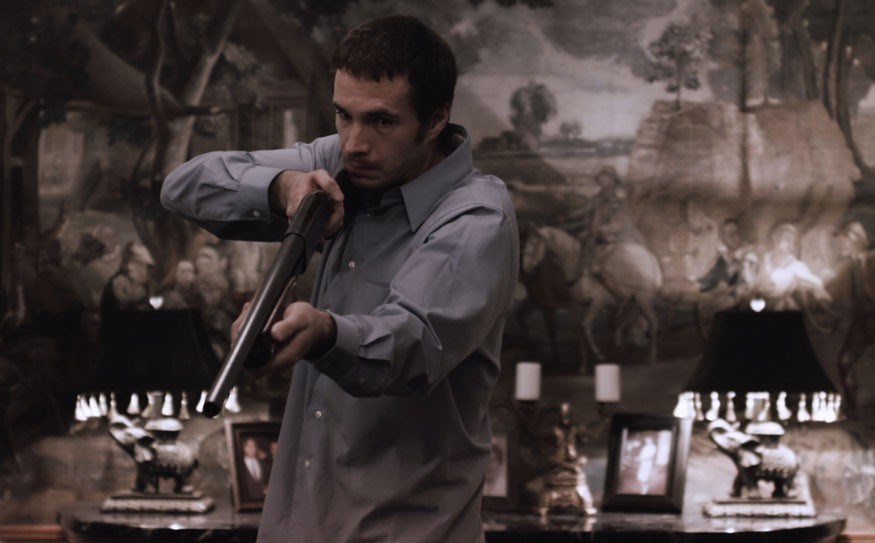 It was the perfect house: sprawling, lavish and tucked away in the woods near Fort Langley.

Director Jeremy Power Regimbal had been searching for a high-end vacation home that would serve as both haven and prison for the characters in his debut feature film In Their Skin. But it wasn't until the very last minute that a production designer scouted the ideal Lower Mainland spot. "We looked forever," Regimbal says over the phone from his home in L.A. "We were almost ready to shoot and we couldn't find anything. It was a hidden gem."

While most of the movie takes place in the house, the crew also travelled up the Sea to Sky to Squamish to get dark, moody shots of the highway.

Regimbal knew the area well, having grown up in Vancouver where he launched his career directing commercials, music videos and other short pieces. He moved to L.A. to co-found the Lab Media Group, a production company and arts magazine with Justin Close. Justin's brother Josh, meanwhile, wrote and stars in In Their Skin.

"It was an incredible leap," he says. "I was so lucky everyone believed in me so much. It was amazing, but I think the biggest challenges were adapting to long-form shooting. Shooting a music video or commercial or short film, you're talking a few days. It's like an endurance race when you get to (long-form) level. You don't want to burn everyone out or burn yourself out."

The thriller's plot too was exhausting with one tense, violent and horrifying scene after the other. "The whole film has a really dark element right from the beginning," Regimbal says. "Making the set a comfortable place to be was one of my jobs. If you're shooting over and over all day, a rape scene or someone being killed, it trickles down to the crew. It's intense."

Curious about that plot yet? The story centres on an affluent couple, Mark (played by Josh) and Mary (Selma Blair) Hughes as they grapple with the death of their daughter, who was killed in a traffic accident. Along with their eight-year-old son, they travel to their family cabin for some time away from home.

The film begins tense with the couple in the midst of mourning and also attempting to patch up their shaky marriage. But the story transforms from sad to spooky with the arrival of the Sakowskis (played by James D'Arcy and Rachel Miner), a strange, socially awkward family that claim to be the Hughes' neighbours. They wake the couple early one morning while delivering a gift of firewood — a ploy, presumably, to invite themselves over for dinner. Once the Sakowskis enter that big, beautiful old house it starts to become clear that they have no intentions of leaving. For Regimbal, who came up with the idea for the film with the Close brothers while they were on a road trip from Vancouver to L.A., exploring themes of perfection and envy were appealing. "I love some of the other ideas: the whole theme of obsession and this whole carrot on a stick, that you can be perfect. It's coming to the realization that there is no perfection. I think that was really interesting as well," he says.

To that end, Regimbal tried to portray Bobby Sakowski — who descends further into evil as the film progresses — as somewhat of a sympathetic character, or, at least, explain his motivation: he and his wife long for a better life. Though, to add they go about it the wrong way would be a grave understatement. "Even though it's crazy, in his heart he's doing this to help who he thinks is his family. You can relate to that, but at a certain point a lot of people lose the connection to him," Regimbal says.

Despite a tight budget (they shot the entire production in just 16 days) Regimbal and his crew got the cast for which they had hoped.

Blair, who first rose to prominence in the sinister teen flick, Cruel Intentions, but more recently acted in the Hellboy movies, was one of the major wins. Her performance in the film is especially impressive. During several scenes she's so weighed down by sadness her heavy eyelids and lethargy make you fear she'll collapse.

"Selma was in a play with a friend of ours," Regimbal explains. "She read the script and really liked it. She did a great job. I thought it was kind of interesting for her and us. I feel like it was one of the first roles where she played her age more, played a woman with a family. I hope people connect with it."

Judging by feedback Regimbal has received during post-screening Q&As, along with accolades from the Tribeca Film Fest, they already have. The film is set to open in theatres across Canada Oct. 26 and in the U.S. Nov. 9. The Whistler Film Festival will be screening the movie on Oct. 30 at Millennium Place in honour of the B-Grade Horror Fest's hiatus this year.

"It amazing," Regimbal says. "It's been two years since we shot it. There was a year and a half in development, writing and creating the story, finding the money. It's been a three and a half year process. I'm so excited."

Tickets are $12 at www.whistlerfilmfestival.com. Doors open at 7 p.m. and entry is 19+. Moviegoers are encouraged to dress up as zombies for a village stroll.