Jungle Book is the bee's knees

Talking-animal movies creep me out. From the borderline animal-abusive antics of Mr.
Apr 13, 2016 6:00 PM By: Feet Banks 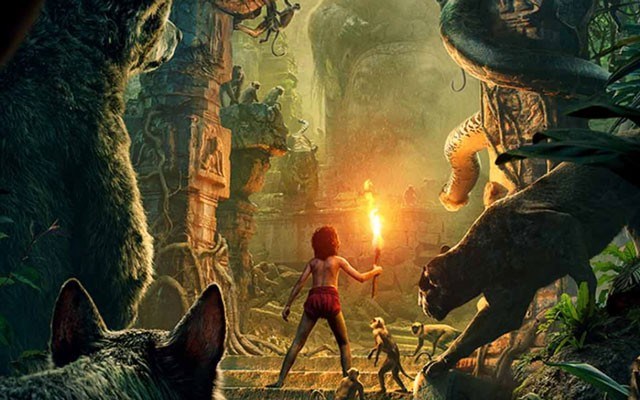 Talking-animal movies creep me out. From the borderline animal-abusive antics of Mr. Ed, through to the Chipmunks and Garfield franchises, to random one-offs like Underdog or Racing Stripes, there is just something off-putting about animal mouths making human words, especially if those words come from a high-concept script full of shitty dialogue about accepting yourself for who you are or some such child-friendly message.

Babe is an exception (because Mad Max creator George Miller is the king) and so is Howard the Duck, but the best talking animals are always either cartoons or stop-motions like Fantastic Mr Fox. Until now. The Jungle Book, an adaptation of Rudyard Kipling's classic novel about a boy raised by wolves in the Indian jungle, opens this week at the Village 8 and it is a live-action/CGI talking animal tour de force.

This one could have been a disaster — the 1967 animated Jungle Book is perhaps the greatest Disney movie ever made (and reportedly the last film Walt Disney was personally involved with), and since Hollywood is infested with unnecessary remakes these days no one can be blamed for thinking The Jungle Book 2016 might be an embarrassing heap of panther dung. That it's not is probably due to a tight script and a solid, movie-loving director: Jon Favreau.

Favreau first grabbed attention as the co-star and writer of Swingers, then quietly chipped away at directing (Made, Elf) before hitting it big with the Iron Man flicks. That gave him the freedom to tackle anything he wanted and what we wanted was to usher The Jungle Book into the 21 century with top-notch digital effects, a darker tone, and good old-fashioned storytelling with a cast that dreams are made of.

The story doesn't change much, but rather than a straight-up remake of the song-heavy original Disney cartoon, Favreau pulls influence from the novel, from Hindu gods and even from The Lion King to fully immerse us in a favourite narrative unfolding in a new world. And most importantly — the talking animals not only work, they steal the show. There needs to be an Oscar category for voice work so Bill Murray can win it. This is the best movie of the year so far.

Also opening this week, the 1990s are showcasing some of their best actors in Criminal, the latest entry in the memory-implant genre of sci-fi actioner thrillers. Kevin Costner (Waterworld, Dances with Wolves) stars as a no-good criminal nutbar who gets a memory transplant from a dying secret agent while untrustworthy government stooge Gary Oldman (True Romance, The Fifth Element) and maverick neurosurgeon Tommy Lee Jones (Natural Born Killers, Under Siege) mess up his life and chase him around. Gal Godot (Wonder Woman) and Ryan Reynolds (Deadpool) make brief appearances but for the most part this one is old dudes in a B-grade action flick that really wishes Liam Neesom would show up. In other words, wait for Netflix.

There is a truly epic sci-fi playing this week but you have to drive to Vancouver to see it. Midnight Special is the latest from ace writer/director Jeff Nichols.

It's about a kid — with extraordinary powers — and his father in a road trip/chase movie with more than a few surprises and just as much weirdness. The less you know about this one heading in the better, but it's worth noting that Nicols is a master at writing realistic but unique characters while giving audiences a peek under the blankets of the anxieties of everyday lives thrust into extraordinary circumstances.

Nichols' most popular film is 2011's Take Shelter, a dissertation on duty and paranoia starring Michael Shannon as a regular-Joe father plagued by visions of a harbinger-of-doom super-storm tornado. In 2012 he released Mud, staring Matthew McConaughey as a Mississippi castaway in a childhood adventure story about the complexities of love. The fact that Shannon stars in all of Nichols's films is reason enough to see them (he plays the father in Midnight Special) but also, few filmmakers are writing stories with this level of complexity and actually getting their movies made. Nichols is a treat and Midnight Special is a thinking-person's sci-fi that's well worth the drive to the city.