The latest roundhouse kick to the nuts of the current Hollywood studio system came last week in the form of Kung Fury, a crowd-funded flick out of Sweden that released for free on the Internet and instantly became the most talked about film since Mad
Jun 3, 2015 6:00 PM By: Feet Banks 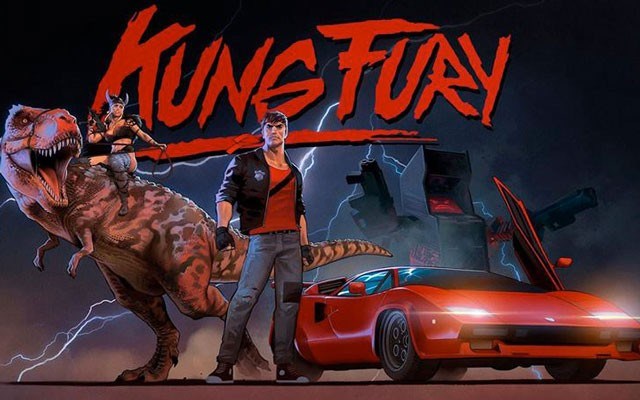 The latest roundhouse kick to the nuts of the current Hollywood studio system came last week in the form of Kung Fury, a crowd-funded flick out of Sweden that released for free on the Internet and instantly became the most talked about film since Mad Max.

If you missed it, Kung Fury is a 30-minute short of '80s action movie perfection filtered through the mind and fury of Swedish writer/director David Sandberg, who also stars as the super-heroic bad-ass cop who travels back in time to kick Hitler's ass but runs into some Viking babes on dinosaurs, Thor, and a city-destroying arcade-game robot along the way. Oh, and David Hasselhoff sings the theme song.

Shot with almost no budget and a lot of green screen (Sandberg could only afford one police officer costume and had to shoot and composite all the extras in his police station scene separately), Kung Fury raised over $600,000 on Kickstarter via people willing to support a premise and trailer they believed in ($10,000 got one lucky backer a role in the film as Kung Fury's new partner TriceraCop). And the end result is astounding. Kung Fury is half an hour of way, way over-the-top awesomeness that's been made and paid for by pure movie passion. And compared to the duds Hollywood released last week Kung Fury only looks that much more futuristic, despite the 16-bit time-travel scenes.

Meanwhile in Hollywood, it's play-safe TV spin-off time as the Entourage movie opens this week. The whole team is back, including Doug Ellin producer/creator/writer/director on the entire Entourage TV run and while I don't expect this flick to blow the back doors of anyone's mind, these guys are pretty good at what they do. You can bet they'll stick with what's worked so far but they do know their product, their audience, and the industry they're portraying — remember in the show when Vincent Chase sells out and does an Aquaman movie, because that was the stupidest superhero they could imagine back then? Not only is there a real Aquaman movie coming in 2018, there's an Ant-Man set for this year.

In any case, the Entourage series didn't end with a bang so it's a stretch to expect much out of this flick that we haven't seen before. Kevin Dillon will surely steal every scene he's in and watch for Billy Bob Thorton as a no-nonsense Texas version of Ari Gold. Otherwise, flashier, fleshier and more self-indulgent is about the best we can hope for. Of course for fans, that will do.

Also opening at the Whistler Village 8 is Spy, a fish-out-of-water espionage spoof starring Melissa McCarthy (Bridesmaids, The Heat) as the desk-jockey-turned-only-hope in a standard cinematic CIA arms dealer scenario. Writer/director Paul Feig had success working with McCarthy on her last two flicks and they bring enough manic girl-power energy to this one that it doesn't matter if the plot is more complicated than it needs to be (while still managing to be clichéd.)

Spy is a character film and McCarthy is always at her best when she pulls comedy from her personality rather than going for easy "fat" jokes. She pulls no punches in this one and a banger supporting cast including Jason Statham's perfect meat-head schtick plus Jude Law and Rose Byrne, only makes things better. Amidst the mayhem, Feig injects strong themes of female friendship and empowerment that are still, sadly, so rare in Hollywood that everything feels fresh and fun. Next up for Feig is an all-female Ghostbusters reboot that will probably rule.

The downloads of the week are Going Clear, Oscar winner Alex Gibney's unflattering look into the Church of Scientology via eight of their former members, and The Source Family, a 2013 doc about an infamous 1970s new-age, vegetarian, commune/cult headed by "Father Yod," a charismatic restauranteur-turned-spiritual-leader who amassed around 140 followers, 14 wives and a psychedelic rock band that recorded 63 albums of really wild stuff.

Founded on the seemingly lofty ideals of purifying the body, refining the emotions, elevating the mind and liberating the souls of his followers, it didn't take Father Yod (a.k.a. Jim Baker but not the televangelist of the 80s) long to fall into the classic cult mind-trap of believing your own hype and feeling like it's ok to start banging all your nubile young followers even if you had previously frowned on polygamy. This one belongs in the same vein as Apocalypse Now or Conrad's Heart of Darkness as a look at the hedonistic corruption of power and the gullibility of the human heart.

Take note dear readers, just 'cause you teach yoga and can make a mean kale smoothie doesn't mean you are the savior of humanity.