My "Best of 2016" review of La La Land elicited a few official complaints to the editor of this fine paper and now the film is apparently back in town this week. But rather than poke the hornets' nest again, let's just outline the facts : 1.
Jan 25, 2017 5:00 PM By: Feet Banks 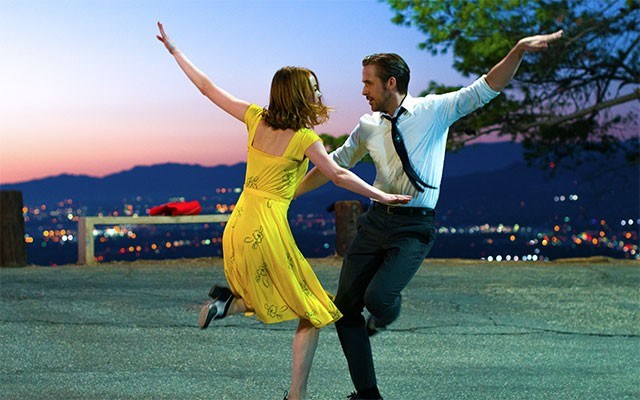 My "Best of 2016" review of La La Land elicited a few official complaints to the editor of this fine paper and now the film is apparently back in town this week. But rather than poke the hornets' nest again, let's just outline the facts :

2. La La Land is a musical, so be wary. Unless you like musicals (and it seems like a shitload of people do nowadays.)

3. La La Land stars Emma Stone (Easy A, Superbad) and Ryan Gosling (The Notebook, The Nice Guys). Both of those people are incredibly talented actors and word is they have great chemistry in a love story about a couple of dreamers set in Hollywood. So they also look the part.

4. La La Land is directed by Damien Chazelle, who is best known for Whiplash (the flick about the drummer kid) and, so far at least, seems to value style and hipness over substance and enlightenment.

5. The Oscar nominations just came out on Monday and La La Land nabbed 14 nominations, tying it with Titanic and 1951's All About Eve for most ever.

Hypothesis: La La Land will likely win the Best Picture Oscar. Its main competitors are Moonlight and Manchester by the Sea, with Hidden Figures as the dark horse. But Hollywood loves movies about Hollywood and despite being handicapped by its musical-ness, it is very well put together.

In any case, I didn't get any listings this week but La La Land is playing at the Village 8 so you may as well see it, because you won't stop hearing about it for the next six weeks (and also Emma Stone rules). As well, there are always the exceptions that prove the rule. In this instance the "rule" is that musicals are usually as appealing as cleaning hair clogs from the shower drain. The "exceptions" are flicks like Moulin Rouge or Team America: World Police. Maybe La La Land is one too. Decide for yourself.

Speaking of the Oscars, Justin Timberlake was also nominated this week, for that "Can't Stop The Feeling" song in the Trolls movie. This shows how stupid judging art is because that song was also recently voted "Worst of 2016" by Time Magazine, Esquire Magazine, Lainey Gossip, Houston Press and at least one of the 361 million people who watched the video on YouTube (Let the record show: the video is worse than the song and the Trolls movie combined.)

But enough of that. There's a Matthew McConaughey movie, Gold, opening wide this week. Thing is, the trailer for Gold promotes it as coming out at Christmas so the fact that it got pushed to the doldrums of late January is not a good sign. McConaughey stars as a sloppy, grimy, unlikeable hustler from the 1980s who has a dream one night that there is gold in the mountains of Borneo. He pawns a couple watches, heads to the jungle with a buddy (Edgar Ramirez from the Point Break remake) and, lo and behold... there it is! Then it all falls apart.

Based, very loosely, on the real-life Bre-X scandal, Gold is one of those movies that almost strikes pay dirt then gets diluted with half-realized moral undertones about greed and the American dream mixed with almost touching dialogue like, "I went looking for gold, but I found a friend." And none of those themes ever mesh with the underutilized crime-story plot enough to make us care or feel. McConaughey is always watchable, even as an utterly unlikeable slimeball, but this one is nothing more than failed Oscar bait. It's also the worst entry in McConaughey's sub-genre of treasure-hunting flicks (Fool's Gold and Sahara are way better.) Sluice slurry, and nothing more.

Speaking of gold, LEGO wisely gave their minifigures an inhuman bright yellow skin tone and they poke fun at that in the Download of the Week. A LEGO Brickumentary outlines the history of the toy company that has produced over 400 billion pieces since its inception in 1958 (that's 57 bricks for every single person on the planet right now). While it highlights some cool builds and dips into the ever-growing geek culture of AFOL (Adult Fans of LEGO), this doc also rides on a pretty promotional track and is definitely LEGO-approved (no mention that all those bricks are made of plastic and will therefor be kicking around our planet until the end of time; also, how healthy are they to chew on?). But to a kid it's just a well-made and inspiring story with cool builds and animated mini-figures; and it makes you want to build some LEGO. Which is way better for your brain than watching videos on YouTube.

Even better yet, fresh air and sunshine. So get outside, kids, and work on your dance moves. If La La Land wins the Oscar you can expect even more musicals at this spring's 72-Hour Filmmaker Showdown.