'Pretty Dumb' is the new smart 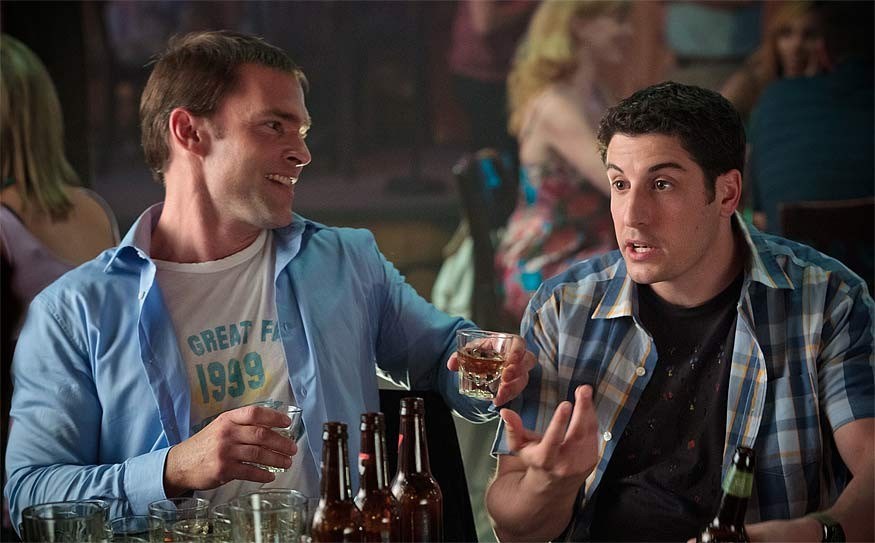 "Stifler is that guy who hasn't changed, but the world around him has."

That's Seann William Scott, summing up what to expect when he reprises his most famous role for American Reunion, the seventh (and gotta be last?!) installment of the American Pie franchise. You know, the one built on that scene where the kid screws an actual apple pie and Eugene Levy walks in.

American Reunion comes out Friday and the title is the plot (like Snakes on a Plane) because we can already visualize almost the whole movie — these Pie characters that have been part of our cinematic culture for more than a decade all reunite and do what we expect them to do.

Stifler, Nadia the exchange student, Jim and his dad — these ought-to-be-unremarkable Pie characters are actually kind of significant because 1999's American Pie ushered in the current trend of lowbrow shock-humour that's been dominating American comedies since Y2K.

While 1998's Farrelly Bros classic There's Something about Mary (re)opened the door for Pie's brand of smoke-em-if-you-got-em, semen-drenched comedy it was American Pie and its six sequels and spin-offs that proved there was real money to be made. Hollywood loves money.

According to Ian Buckwalter at The Atlantic (and I have no reason to doubt him) the first American Pie screenplay was actually circulated under the name "Untitled Teenage Sex Comedy That Can Be Made For $10 Million That Most Readers Will Probably Hate But I Think You Will Love."

Nowadays that kind of self-reflexive, post-modern attitude is pretty hip but back then it took balls. Some forward-thinking studio bit, however, and American Pie was made for $11 million and took in more than $235 million, a 2,000 per cent profit.

American Pie 2 did almost as well and when you add in American Wedding the franchise made over $750 million on just $95 million of investment. Those stupid movies made people rich. (And who knows how much the four Direct-to-DVD spin-offs about Stiffler's relatives made, but if you actually saw American Pie Presents: Book of Love you have more free time than me.)

Those stupid movies made people rich and they also gave them the courage to bankroll more "stupid" movies like The Hangover, Old School, Harold and Kumar, Hot Rod, Strange Wilderness and most of what Judd Apatow or Seth Rogen do — a.k.a. most of the best comedy of the past decade.

Obviously American Pie, a film about a bunch of high-school clichés trying to get laid before they graduate, is not rocket surgery. Nor is it the first juvenile, sex-charged comedy to grace the screen (Animal House, Porky's, Hot Dog, etc.) but somehow the Pie hit just the right spot culturally. Canadian comedic genius Eugene Levy lent credibility but a (mostly unknown) original Pie cast had just enough star power (and beauty) to pull off a film that could rightfully be called "the late '90s weedsmoker's Titanic."

And many of those high accolades ought to hang on Stifler, the crass idiot with the perfect mix of innocence and ignorance that reminds us all a little of ourselves (or at least someone we wish we had the balls to be). Stifler was the first piece of art to embody the primary truth of the new millennium — shit's getting dumb.

Most critics thought Seann William Scott would never escape that role but now he's back at the well with his performance in Goon. Stifler and Eugene Levy are the only actors who got paid in every single one of the Pie films. Who's dumb now?