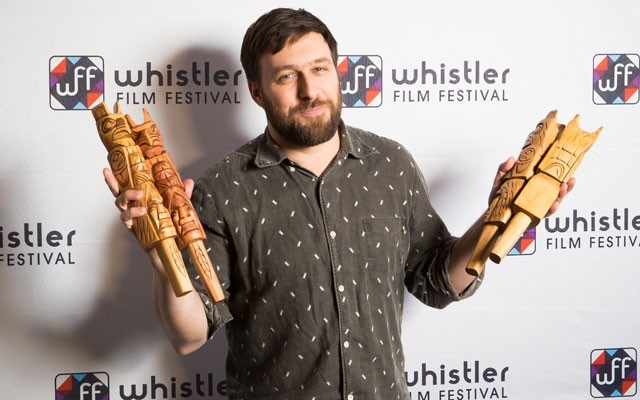 The prizes were handed out at the awards breakfast at the Whistler Conference Centre on the final morning of the festival, Sunday, Dec. 7.

His lead actress, Hadas Yaron, won Best Performance in a Borsos Film for her portrayal of Meira, a young Orthodox Jewish woman who finds freedom from her restrictions of her faith and marriage through a relationship with a young man in mourning.

There were six feature films in the Borsos category overall.

The winners were selected by a judging panel of three: actress-producer Kim Cattrall, actor-director Jason Priestley and Michael Hirsh of The Entertainment and Media Finance Group Inc.

And Whistler filmmaker Mike Douglas, along with his co-producer Anthony Bonello, was on hand as they won Best Mountain Culture Film for their documentary Snowman.

Meanwhile, J.C. Chandor's A Most Violent Year, starring Jessica Chastain and Oscar Isaac, was given the WFF Audience Award for most popular film during the festival on Tuesday, Dec. 9.

The WFF screenings were Canadian premieres.

The runners up were Mountain Men, a Canadian comedy written and directed by Cam Labine in second, while Snowman came in third place.

Both were world premieres at WFF.

On Monday, the festival also announced participant numbers. Total attendance for this year's festival was 11,273 attendees, a 13 per cent increase (9,964) over 2013.

Other winners from the awards breakfast included:

The Backwards Class – which took five years to make – won best documentary at the festival. It also tied for the EDA Award from the Alliance of Women Film Journalists for best female-directed film.

Its director Madeleine Grant shared the honours with director Anne Fontaine, who took the EDA Award for her narrative feature Gemma Bovery.

At the award ceremony, Shauna Hardy Mishaw, the executive director of WFF, said films "give us visual insight into topics that move us and makes us feel differently."

She told the filmmakers in the audience: "You are trusting us with your work and that's really important... bring it to us and let us help you."

She thanked her staff and the 120 volunteers to loud applause.

Co-chairs of the WFF board, Don Thompson and Warren Franklin, announced that the film festival is launching a capital campaign and the creation of a Patron Circle for 2015.

It will be the 15th year of the festival next year.

"(This is to) endow the festival with really good funding, going forward," said Franklin.

The 2014 festival saw 87 films — including 40 features — show alongside talks about the state of the filmmaking – both in Canada and around the world – at the WFF Industry Summit.

Other highlights included In Conversation talks with producer Don Carmody (Meatballs, Good Will Hunting, Chicago), How to Train Your Dragon creator Dean DeBlois, and Sex and the City actress Kim Cattrall.

In an interview following his event on Thursday, Dec. 4, Carmody said he had previously been a Borsos Award judge and remained a strong supporter of WFF."I've been a judge at two festivals and I generally don't have a lot of time," Carmody said.

"I love Shauna and I'll do anything for her. When I came up here first I thought, 'What a great little festival! This could be something some day.' She is bound and determined to make it work. There is this beautiful setting and they treat filmmakers well. I can't wish them anything but success. I hope they become Canada's Sundance and they could.

"They've just got to get that motion behind them and the motion comes from success."

When the launching pad for a particularly successful film is WFF, the success will gather further pace, Carmody added.

Canadian actor Niall Matter was one of four Rising Star honourees at the festival. He said he was still trying to absorb the implications of what was his first award.

The award was created to promote Canadian talent, with his fellow honourees Camille Sullivan, Dustin Milligan and Sara Canning.

"It's definitely a very good feeling and I have nothing but gratitude for that," he says.

"It puts me on the radar for more Canadian indie filmmakers and that's what I would love to explore. The first part of my life I was an oil rigger — eight years an oil rigger and eight years a professional actor. So I am at an interesting spot in life, so to get this honour is amazing."

Attending his third WFF in a row was Steven Gaydos, the vice president and executive director of Variety magazine.

"I just feel that Whistler is poised for some great stuff," he said after the awards breakfast.

"Three, four years ago when we started this, there was this idea that the dates of the Oscar season had moved a bit to the advantage of this weekend in Whistler. I think it takes a bit of time for people to understand Whistler as a platform for award-season movies, but the combination of Variety's involvement, Paul (Gratton, WFF's director of programming) and Shauna's work, the programming and getting people like Dean DeBlois from How to Train Your Dragon 2 — a major Oscar contender — I think those are big developments. Really exciting."