Sherpas Cinema wins IAMF Grand Prix for Into the Mind

Whistler filmmakers wow judges by 'positively changing' ski film genre; International Award given to mountain movies is the first ever presented to a ski film
May 14, 2014 10:00 PM By: Cathryn Atkinson 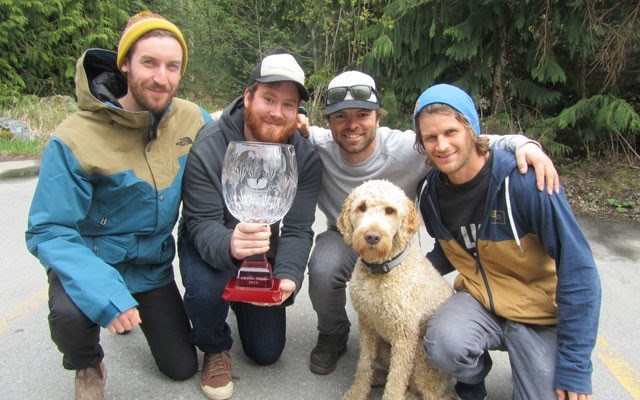 Aldo Audisio, the coordinator for the International Alliance for Mountain Film in Tento, Italy, has some great things to say about Whistler's Sherpas Cinema.

Sherpas is the winner of the alliance's 2014 Grand Prix for its latest feature film, Into the Mind.

"Eric Crosland and Dave Mossop (two of the company's three founders) have created a new style in filming snow sports. With top-quality, innovative photography and editing, the team of Sherpas Cinema has taken the necessary risks for positively changing this genre of mountain film," Audisio wrote in the letter informing Sherpas of the win.

"It has successfully sought an innovative take on narrative formulas, and its generally award-winning films of extreme snow sports have created new audiences, transmitting mountain culture to them at the same time."

Into the Mind, released in 2013, is the first "ski film" to take the prize, and Mossop was on hand in Trento on May 1 to receive the enormous crystal goblet trophy handed to winners.

"Trento is very much in the centre of the mountain-culture community in Europe, and they graciously invited me over for the festival and to receive the award... We thought, 'Wow!' It's incredible," Mossop says.

"It's a very meaningful award to us. They said some incredible things about Into the Mind and I feel it hit the nail on the head of what we're all about... It was a huge honour to have the International Alliance recognize our artistic risk taking as a parallel to the risk that the athletes are taking in the mountains."

Mossop says that this win translates into a better profile for the studio in Europe, since the alliance is made up of 21 international mountain film festivals, including the Banff Mountain Film Festival in Alberta.

Into the Mind also recently received laurels for Best Photography at the Bilbao Mendi Film Festival in Spain.

"And that's a big deal as well! Bilbao is a very renowned festival," Mossop says.

The aim with Into the Mind was to blur the line between dreams and reality, telling a first-person story about going after the ultimate in routes — whether in the mountains or in an urban landscape. The result is hypnotic and surreal.

Into the Mind was shot in Alaska, Bolivia, the Himalayas and near Bella Coola, B.C. Mossop directed the film.

Into the Mind features athletes including Callum Pettit, Kye Petersen, JP Auclair, Rory Bushfield, and Angel Collinson. The film attempts to strike a balance between showcasing their talents and using special effects and techniques. It caused some controversy when it was released because it was so different.

"I think that controversy is the nature of change. It's that discussions that happen after a film or if you see a weird piece of art; the beginnings of ruffling things up and hopefully seeing things progress," Mossop says. "If you go online and look at comments on Into the Mind, they are overwhelmingly positive. But there are some pretty heavy burns as well."

The core crew of Sherpas Cinema has been in existence since 1997, with Mossop, producer/director Crosland and producer Malcolm Sangster having known each other since high school in Calgary.

The Grand Prix caps off a period of planning, shooting and presenting the feature, and Mossop says they are concentrating on shorter works for the next little while.

At the moment, they are working on "all sorts of little things," he adds.

"Some ski and action stuff, snowboards, some more commercial work that we're doing, car and truck commercials, and things like that. We're also busy with upgrading our Whistler studio, and bringing in new amazing people, collaborating... There's no shortage of work for us."

What is not currently on the storyboard is a new feature film.

"Thankfully. Feature films are exhausting and consuming, so it's wonderful to have a bit of a life for once and chip away on these smaller, short-form projects," he says.

This and more of Sherpas' Fly Over Canada films are part of the next year's agenda, as is a Rockies series for Tourism Alberta.

"We're going to do that until we feel more motivated and inspired to start a new feature," Mossop says.

The commercial work is still a new thing for Sherpas.

"We're just getting into the commercial industry and of course it is significantly more lucrative than my action sports; those are a labour of love. We're never going to stop doing action sports and some of the commercial work will help us pay for more big action projects," Mossop says.

Now that Sherpas Cinema has a well-established artistic signature, the commercial industry knows what they are getting.

"Yes, it's really been a roundabout path we found ourselves on that has taken us to the top of the industry. All of a sudden, we are collaborating with some of the best people in the world and this industry," Mossop says. "We're extremely fortunate to have stumbled down our own path to getting there."