Back in the 1990s, Quentin Tarantino used to bemoan the fact that American audiences would watch a four-hour football game but refused to sit through a three-hour movie.
May 2, 2020 7:00 AM By: Feet Banks 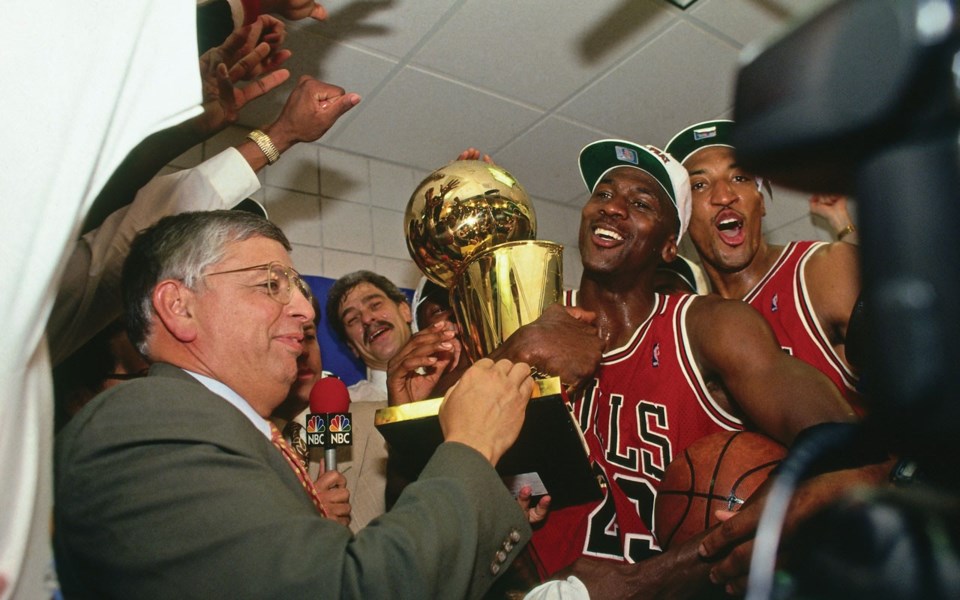 ESPN and Netflix’s new documentary The Last Dance chronicles the dynasty that was the 1990s Chicago Bulls. Photo by Andrew D. Bernstein/courtesy of Netflix

Back in the 1990s, Quentin Tarantino used to bemoan the fact that American audiences would watch a four-hour football game but refused to sit through a three-hour movie.

Of course, Quentin got famous enough that he started making long-ass movies anyhow, but there has always been a bit of conflict there: between sporting events and films, the jocks versus the art geeks.

It's hard to tell who's winning these days—the top jocks made obscene amounts of money (the 10 highest-paid athletes pull down just under $1 billion/year), but so does The Rock (he raked in $89.4 million in 2019, although the top-10 actors only grossed just over $609 million—and only one of them was a woman, ScarJo.) The athletes work longer seasons but actors work much longer days, and the media mayhem and celebrity culture that surrounds both groups really has to suck.

Of course, none of it matters right now—sports are cancelled, and so is Hollywood. So, just like how we film nerds are digging into the cinematic archives, sports junkies are also being forced to relive and re-watch old glory.

The good news this week, for both groups, is that Netflix is carrying ESPN's The Last Dance, a 10-episode series about Michael Jordan and the 1990s Chicago Bulls dynasty. It's hard to not be impressed with the grit, drive and talent of Jordan, but The Last Dance gives plenty of screen time to the supporting characters and masterfully builds the overall narrative. Superbly edited in a time-jumping (Tarantino-esque) fashion, this series features ridiculous amounts of archival footage of everything from Jordan's high-school games to practices, locker rooms, even Dennis Rodman's (and Carmen Electra's!) Las Vegas hijinks. This show is win-win: all the action and heroism of sports with the dramatic structure of cinema. There are four episodes out now with new ones coming every Monday.

About Tarantino, though, his first three-hour-plus film was Kill Bill, but back in 2003, it was still considered box-office suicide to drop a flick that long, so he broke the story in half and released the 246-minute epic as two films, months apart. Since we're in Quarantino, we're treating both parts as one long, awesome, chop-socky masterpiece (that's also a love story) and in one sitting is really the only way to watch it.

Based loosely on the characters from the "Fox Force Five" trailer Mia Wallace talks about trying out for in Pulp Fiction (where Mia/Uma Thurman plays "the deadliest woman in the world with a knife," and the other four foxes cross over just as seamlessly), Kill Bill sees Quentin jump into one of his favourite narrative conventions—revenge—with Thurman returning to star as The Bride, a woman wronged and out to kill every rat bastard that gets in her way.

A beautiful return to violence, Kill Bill is also blatant homage, primarily to the Shaw Brothers' kung-fu flicks and the grindhouse style B-movies that film nerds have been getting wet for since the drive-in days, but also to lesser-known revenge flicks like 1974's Lady Snowblood and 1968's The Bride Wore Black, as well as anime, spaghetti westerns, his own flicks, and Bruce Lee's yellow suit in Game of Death. It is a perfectly packaged film built from passion and geekdom. Tarantino's love of cinema is a driving force through all his work, but Kill Bill is the first time it really commands the entire flick.

And Quentin cut no corners. The combined production lasted 155 days and cost $55 million, much of that on blood. In fact, all the blood effects in the masterful "House of the Blue Leaves" were practical—no CGI, just fire extinguishers, blood-filled condoms, and tear-away limbs. That scene reportedly took eight weeks to film, with Tarantino instructing the class, "Let's pretend we're little kids making a Super 8 movie in our backyard, and we don't have all this fancy shit. How would you achieve this effect? Ingenuity is important here."

And there you have it: whether you're making movies or winning at sports (or surviving a pandemic), ingenuity is always important. See you next week.