Western civilization is at an interesting point. The Interwebs have democratized information — any curious kid with a connection has access to almost the entire history of human knowledge.
Nov 2, 2016 6:00 PM By: Feet Banks 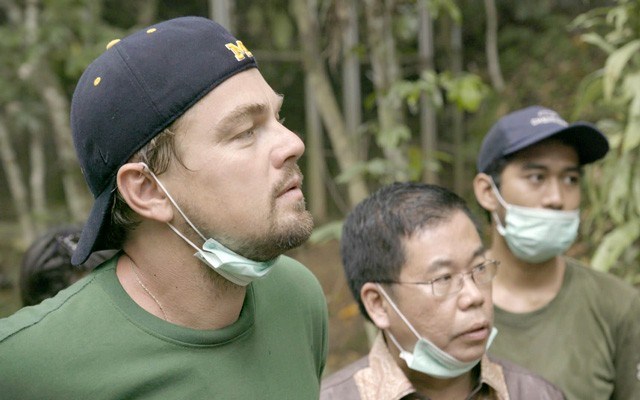 Western civilization is at an interesting point. The Interwebs have democratized information — any curious kid with a connection has access to almost the entire history of human knowledge.

But misinformation has also been democratized — any dipshit with a connection can publish lies, false news and cleverly disguised bullshit.

This may or may not explain climate-change deniers but regardless, Leonardo DiCaprio is setting the record straight in Before the Flood, a free National Geographic climate change documentary that's also the Download of the Week.

Directed by Fisher Stevens (Hackers, The Cove) and executive produced by Martin Scorsese, Before the Flood follows DiCaprio (a UN messenger of peace) as he travels the world showcasing the politics and dangers, both current and future, of climate change.

Playing curious observer without trying to come across as an expert, DiCaprio visits melting Arctic ice caps, flooded crops in India, the tar sands of Alberta/Mordor as well as handful of important scientists and politicians from around the globe to share insight on the different ways we are destroying our planet — and how we might start saving it.

The haters will point out that DiCaprio uses carbon-based fuel in his jets and helicopters, while others will question why they're getting information on our own extinction from a dude best known for banging 20-year-old Victoria's Secret models and fighting a grizzly bear.

But the oppressed have no choice but to fight with the tools of their oppressors, and messenger-Leo makes sense in a celebrity-crazed culture that systematically ignores anything a non-famous person says.

Before the Flood could have spent more time peeling back the layers of darkness and evil surrounding fossil-fuel industries and their relationship with our governments and mainstream media, but it is still well worth the watch. It's also free on YouTube.

At the Village 8 this week, the vibe is much more sparkly as Trolls, a movie based on those '80s toys with the big hair, hits screens. Slick, shiny and apparently a little wacky, this one comes from the creators of Shrek (so expect entry-level puns and low-grade humour), with Anna Kendrick and Justin Timberlake voicing the main characters (so expect singing). Somewhere in there is a message about being happy with what you have. Or have not — I have not seen Trolls, and that makes me happy.

Also opening, Dr. Strange expands the Marvel universe with an origin story about one of their lesser-known heroes that's full of untamed magic, Asian mysticism, acid psychedelia, and at least a few visuals cribbed from Inception. Benedict Cumberbatch (The Imitation Game) stars as a cocky neurosurgeon who gets humbled by a car wreck and wanders the globe, until a bald Tilda Swinton/Yoda knock-off helps him find the power to heal himself and defend the Earth against evil by using the power of magic/The Force.

Dr Strange is not the worst, it's somewhat entertaining and the visual spectacle is appealingly unique(ish). It does lack the humour that made Guardians of the Galaxy so perfect, and Cumberbatch doesn't have the Robert Downey Jr. charisma that salvaged Iron Man.

Add in an underdeveloped villain and enough philosophical ranting to fuel a six-hour coffee-table party and bets are this one will be forgotten by Christmas. Dr. Strange is flashy, and strange, but it's just another not-bad comic book movie in a world that increasingly tired of comic book movies.

Also opening, Hacksaw Ridge, a Second World War tale of heroism and sacrifice based on the true story of Desmond Doss, an American soldier who saved 75 men from battle without ever firing a weapon. A medic who refused to even carry a gun, Doss famously stuck to his strict "Thou shalt not kill" beliefs through one of the bloodiest battles in the war and ended up with a Medal of Honor and, now, a movie directed by Mel Gibson.

Gibson is a total wingnut who's gotten himself into trouble numerous times for saying and doing offensive and questionable things. Many upstanding citizens with solid morals will skip any film with his name attached, but the problem is he's actually a pretty solid director. And when it comes to making a war movie, batshit crazy is kind of exactly what you want for a fresh perspective.

As such, Hacksaw Ridge is a bloody, chaotic opera as much about internal suffering and the spiritual tolls of pain and violence as it is about heroics and the horrors of war. Gibson fills the screen with carnage, severed limbs, human shields, rats gnawing on corpses — all this in a movie with a pacifist message. It's madness, hellish, and ends up being a pretty fresh look at a pretty shitty human invention. War is hell kids; drop your pants, not bombs.