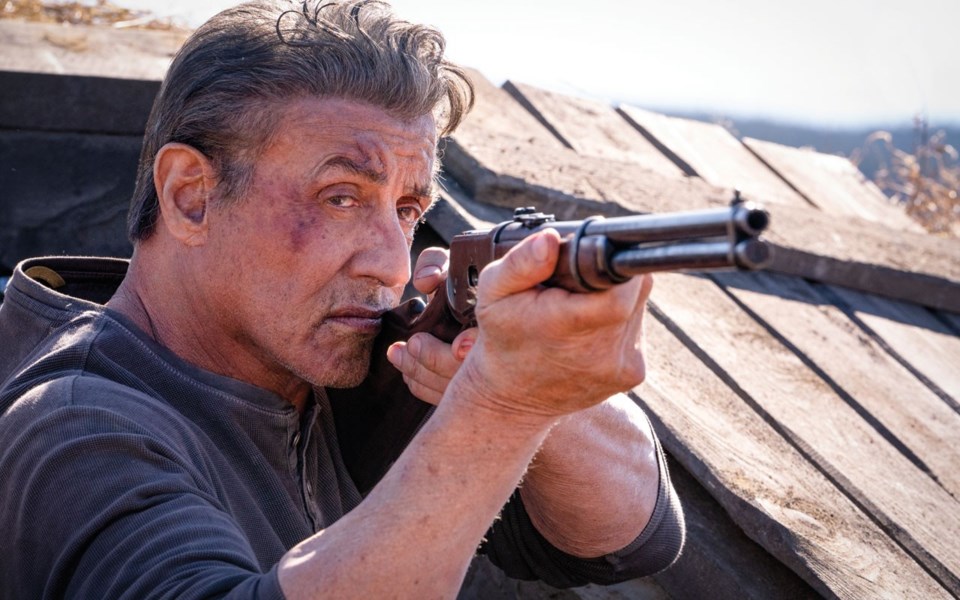 Did anyone ask for another Rambo sequel? It doesn't matter 'cause we got one. Nearly 40 years after he first hit the screens as John Rambo, Green Beret Vietnam veteran up against insurmountable odds, Sylvester Stallone revisits the character (and the odds) this week in Rambo: Last Blood, opening this week at the Village 8.

There were no pre-screeners for this one (it's Rambo 5, do we really need one?) but from the trailer it looks like Rambo is in Mexico trying to save his niece while setting booby traps and lots of classic Rambow-and-arrow shots. Stallone co-wrote but few expect this one to break much new terrain in either the Rambo or action genres.

But it does lead to a larger question—is Sylvester Stallone the greatest action star of the last 50 years? And if not, then who is?

This is not an easy debate, so to establish action star dominance we need to set some parameters: box office popularity counts (hello, Harrison Ford and The Rock), but not for much, while range of roles and genres is a sure way to get points (Kurt Russell could do sci-fi horror like The Thing, straight action like Escape from New York or action comedy like Tango & Cash).

As well, sequels and franchises matter (Mel Gibson had Mad Max AND Lethal Weapon), but so does totally random stuff that just works (Milla Jovovich's Resident Evil run, Eddie Murphy's Beverly Hills Cop, or Liam Neeson in Taken). As well, the current era of superhero movies is not in contention (sorry Ryan Reynolds) and I'm not counting action imports like Jet Li or Jackie Chan because most of us just aren't familiar enough with their overseas work. Clear as mud? Ok, let's go.

10. Tom Cruise: He ticks a lot of boxes with the Mission Impossible flicks, the Top Guns, Jack Reachers, The Last Samurai and Minority Report. But he loses points for Scientology and just being weird.

9. Angelina Jolie: The hottest woman in the world wasn't afraid to kick ass and her run started with Gone in 60 Seconds then led to Tomb Raider, Salt, Wanted, and Mr. & Mrs. Smith. Angie set a new standard that we are still enjoying today.

7. Will Smith: He's loveable and so good he flies under the radar, but the Fresh Prince can kick ass. From Bad Boys to Men in Black to Independence Day to Bright, Will Smith has legit action range.

6. Chuck Norris: He was the Americans answer to Asian martial arts and his brand of gritty toughness was so manly it outlived his actual action career by decades. But Missing in Action and Good Guys Wear Black are pretty killer and he did fight Bruce Lee in Way of the Dragon.

5. Sylvester Stallone: Five Rambo flicks, eight Rockys plus hits like Cobra, Demolition Man, Death Race 2000, Judge Dredd and Cop Land. He has variety and longevity, plus Over the Top is the best arm-wrestling family drama/action flick ever.

4. Bruce Lee: He only made four feature films before his death or he'd be the king for sure. The original philosophical action star, Bruce Lee changed the game not only for action stars but also for Asian stars. A true hero in real life and on screen.

3. Bruce Willis: Die Hard created a new type of "everyman" action hero that spawned numerous sequels and countless knock-offs ("it's Die Hard on a ____" is still the most common action plot), but Willis also brought it in The Fifth Element, Armageddon, 12 Monkeys, Sin City, Looper and even The Last Boy Scout.

2. Keanu Reeves: A bit of a dark horse to chart this high but he reinvented himself as an action hero three times. First with Point Break and the Speed flicks, then with the genre-revolutionizing Matrix (the sequels floundered but whatever) and then again with his three-and-counting John Wick flicks which feature tactical shooting and stunt work that's unsurpassed by any on this list.

1. Arnold Schwarzenegger: True, the only person on this list he can outact is Van Damme, but shit Martha if this giant bodybuilder didn't personify ass-kicking for 20 straight years. From Conan to Commando to The Running Man to Total Recall to True Lies, Schwarzenegger delivered dumb one-liners and kick-ass action. See also: The Terminator flicks.

Brad Pitt has a movie out this week (Ad Astra) but it's not an action flick so it's gonna have to wait. Sorry Brad, Angie takes this round.