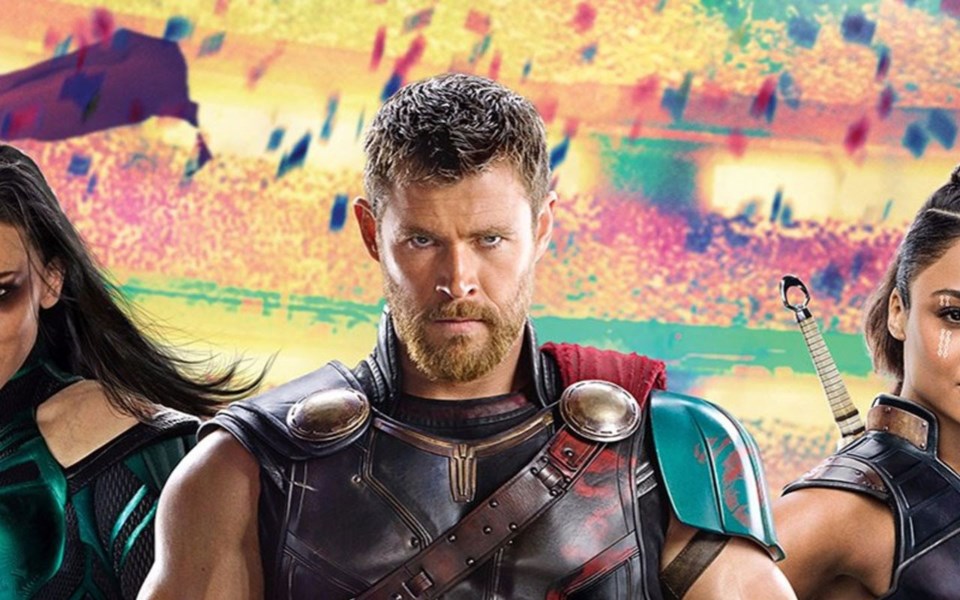 Thus far, Thor has been the most annoying Avenger. The one you'd most like to throw a Grape Crush Big Gulp at, just because...

Certainly, it's idiotic to throw anything at the Norse god of Thunder but at the same time, if Thor is really that badass why is he dicking around worrying about saving the Earth all the time? Thor has his own planet, called Asgaard (ass-guard??) and it's a technicolour dreamscape that also seems to be in need of constant heroics.

Or maybe because he's a god, Thor can be in multiple locations (universes?) simultaneously.

In that case, screwing around fighting aliens with a witch, a master archer, a trust-funder in an iron war suit, and a dude that can shrink to the proportionate size and strength of an ant... maybe that's just something Thor does for fun.

Because whatever the case is, in his own franchise, in The Avengers, and even in the comics, Thor kinda blows.

Well, he used to. Thor: Ragnarok opens this week and isn't it ironic (call Alanis!) that the most wooden and uninteresting character in the Marvel universe suddenly has the most colourful, charismatic, and enjoyable movie of them all.

Give the credit to New Zealand director Taika Waititi (What We Do In The Shadows, Hunt for the Wilderpeople), a master of dry humour and personality who understands the timing and physicality of comedy as well as anyone in the business. For the third film in the Thor sub-franchise, Waititi delivers a god worth giving a shit about. And he does it by not really giving a care, by having fun.

Thor: Ragnarok is essentially a buddy comedy and the twist is Thor rotates buddies. The storyline is perfectly comic book-y: Thor (Chris Hemsworth with a haircut) discovers that his dickweed brother Loki (Tom Hiddleston) has been impersonating their father Odin (Anthony Hopkins) who is either imprisoned on Earth, dead, or both. Then Dr. Strange (Benedict Cumberbatch) pops in to explain what's going on, just before the crap hits the rotary air-conditioner when Thor and Loki's older sister Hela, the goddess of death, shows up.

First of all, Hela is played by one of the best actresses (Cate Blanchett, watch I'm Not There). She can also destroy Thor's magic hammer without even trying, and she's pretty sure all of Ass-Guard is rightfully hers. So she boots the little bros out to some planet that's like Gladiator on loop, except it's run by Jeff Goldblum channelling Jabba the Hutt. Then she starts literally tearing down the walls.

And it gets better. Hulk shows up to battle Thor, because who hasn't wondered which Avenger truly is the toughest? And the good times keep rolling.

Waititi's Thor has the energy of a couple kids arguing about their favourite comic books. It puts talented actors and a decent script into a film that looks like the panels of a golden-era Jack Kirby comic book.

And best of all, actress Tessa Thompson (Creed) steals the whole show as Valkyrie, a rogue who captures Thor and sells him to Goldblum the Hutt, for booze. Rolling Stone has called Valkryrie "the Han Solo of the film," which is notable because now Thor: Ragnarok is being compared to one of the most beloved film franchises of all time, and also: Thompson's Valkyrie is cooler than Solo. (Solo's star has dimmed somewhat now that people are starting to realize he basically forces himself on Princess Leia in the original trilogy, thus teaching a generation of boys that the way to find love is by not taking no for an answer.)

Thor also contains nice sub-textual threads about genocide, the ego, the price of freedom and exactly what it is that makes a hero. Mostly, Waititi's Thor is a refreshing reminder that although these superhero movies cost hundreds of millions of dollars to computer-make, a comic book used to be a buck twenty-five.

The other new movie this week is A Bad Moms Christmas. There were no prescreenings and even if there were, who the f*ck is going to watch a Christmas movie right now? The twist is this one is a spinoff from Bad Moms (which kinda sucked but had a few moments) and stars Mila Kunis (Gia, where she played young ANGELINA JOLIE!!!) Kristen Bell (the original Veronica Mars) join Susan Sarandon (legend) and Cheryl Hines (no idea) in a Christmas movie about why families suck but also rule.

Cute, but whether A Bad Moms Christmas is good or not (my money's on not), the fact remains that we are still six or seven weeks away from even thinking about watching a Christmas movie. Stupid.