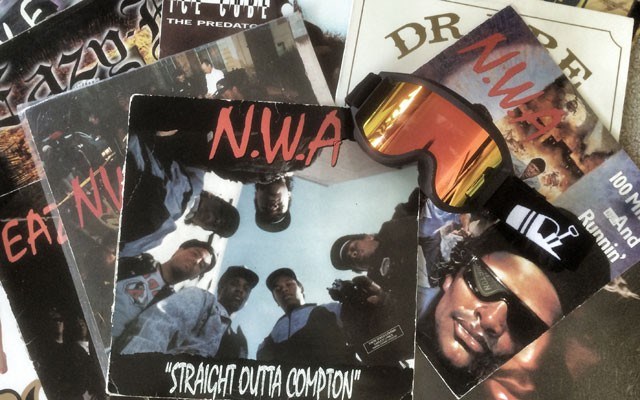 "Fuck crossing over to them, Let them cross over to us!"

There were only four or five kids in Whistler's Myrtle Phillip Community School who listened to "rap" music back in 1989. Black urban culture was about as far removed as it gets for kids living in a (very) predominantly white, western Canadian ski resort and tapes like N.W.A.'s "Straight Outta Compton" were definitely listened to on headphones or far from the ears of parents, teachers and even peers.

By 1995, things had changed drastically. Dre, Snoop, Biggie and the Beastie Boys were as popular as Nirvana and Slayer on the school bus ride to Pemberton High, and while Whistler video stores still didn't have Krush Groove, Beat Street or Wild Style, films like Colors, Juice and New Jack City (plus the televised Rodney King beating and riots of 1992) helped put visuals to the utterly different and interesting culture white kids were hearing (and buying) on records. Hip hop was suddenly everywhere.

Well, everywhere except local theatre screens. In the spring of 1995, New Line Cinema released Friday, a stoner comedy from unknown black director named F. Gary Gray working off a script by ex-N.W.A. lyricist Ice Cube. For Whistler teens, there was never a question of if an "urban" film like that would play on our local movie screen so we packed the car, amongst other things, and headed to Vancouver to partake in what would become one of the best comedies of the era and a true cult classic.

That was 20 years ago. Hip hop is now so predominant that it influences almost every aspect of western culture from fashion, to marketing, to the way your mom awkwardly describes her jewellery as "bling". Old School Hip-Hop Night at the GLC is the best club night on the Whistler calendar, the biggest acts at both the Pemberton and Squamish music festivals were "rappers" (I use the term pretty loosely with Drake), and Whistler has its own, legitimately homegrown hip-hop group in Animal Nation. As N.W.A. producer Dr Dre predicted, "We" have most definitely crossed over to "Them."

But F. Gary Gray still can't get his film to open on a Whistler movie screen. Straight Outta Compton drops this week but like we did with Friday back in the day, you're probably gonna have to drive to the city. Compton, a biopic about the meteoric rise of N.W.A., a group of L.A.-based rappers who spat brutally honest lyrics about the abusive authority of police and a racist system that seemed designed to keep African Americans subjugated, imprisoned and entangled in violence.

While fans will flock to see the Hollywood-ized life stories of Dr. Dre, Eazy E and Ice Cube (MC Ren and DJ Yella apparently play smaller roles in the film) it will be important to consider how little has changed since these "Niggaz Wit Attitude" shone a light into some of the darkest places of the American dream with songs like 1988's "Fuck the Police".

With ongoing news stories describing racial violence and police brutality in Ferguson and other U.S. communities, it seems the culture of racism N.W.A. rallied against is still as common as ever in America (the difference is people can video and share evidence of those problems a lot easier than before).

The N.W.A. story will be engaging and dramatic but what will elevate Straight Outta Compton is how well the film integrates and resonates the stories of the past with themes and problems of the present, and future. It will also be interesting to see if the movie touches on gangster rap's problematic tendencies towards celebrated misogyny. We can get to that next week after I actually see this film (in Vancouver).

But don't harass the kids at the Village 8 if Straight Outta Compton doesn't play this week. Those decisions come from Metropolitan Theatre's head office and are based on corporate algorithms none of us will ever understand, save that they rarely seem fueled by common sense or an ear to the street.

Instead, The Man From U.N.C.L.E. is opening this week at the Village 8. It's a Cold War era spy movie about the unlikely teaming of U.S. and Russian spies to stop — you guessed it — a terrorist threat. Henry Cavill (Man of Steel) and Armie Hammer (Lone Ranger) star, with Guy Ritchie (Snatch) directing, so expect some stylized action and slick art direction but I couldn't even make it through the trailer (because it was five minutes long!!!), so that says something.