Zombies and fairies and freaks, oh my

Time flies, people change, and apparently even zombies evolve. At least they do in Zombieland: Double Tap , now playing at the Whistler Village 8.
Oct 17, 2019 8:00 AM By: Feet Banks 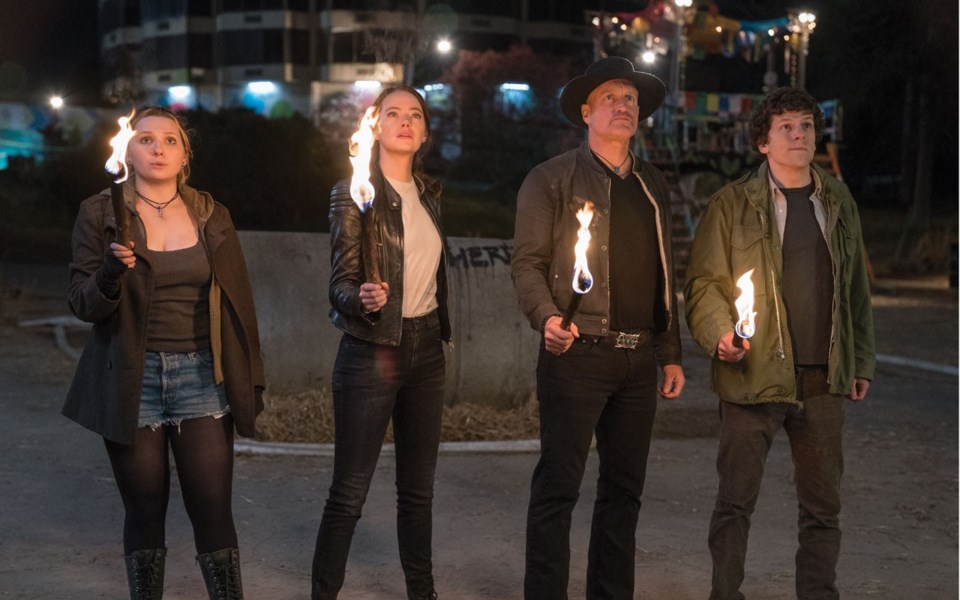 Time flies, people change, and apparently even zombies evolve. At least they do in Zombieland: Double Tap, now playing at the Whistler Village 8.

A decade after the original film enjoyed success and cult status for its irreverent (and ultraviolent) takedown of the zombie genre, director Ruben Fleischer (Venom) has the whole gang back together for another kick at the undead can.

Abigail Breslin (another Oscar nominee) is back as "Little Rock," the beacon of hope for a better world and she's the one who convinces the squabbling makeshift family it's time to hit the road.

That means new (not especially fleshed out) characters, new "why not?" locations (Zombie Graceland!) and lots of the same dynamics and vibe that made the first flick a hit.

Focused more on its human characters than the shambling, brain-hungry monsters of the title, Zombieland: Double Tap relishes in violence (some critics find the creative glee Fleischer takes in killing zombies a tad too sadistic) and pokes fun at the band of idealistic, cooperating pacifists our crew stumbles into. There is no room for love and light in a zombie apocalypse, and that's OK with me.

Opening this week, Maleficent: Mistress of Evil stars Angelina Jolie as the villain from the classic Sleeping Beauty fairy tale, who somehow became the heroine of her own flick, and now has a sequel that no one really asked for. (Disney, and Hollywood in general, still believes that if an audience will shell out a couple hundred million clams for a movie, any movie, then it deserves a sequel. As we know, this is rarely the case, not counting Zombieland.)

It's hard to go wrong with Angelina though—she's only appeared in two live action flicks since 2010, so Disney knows audiences will turn out just to see those lips and augmented cheekbones.

Too bad the rest of the film is not as lush, nor as sharp.

First of all, the "evil" subtitle really has little to do with anything, Maleficent is the voice of reason in what is essentially an environmental/indigenous rights film—think Avatar, FernGully, or the history of most continents on Planet Earth.

Of course, it's all under attack. Playing into the idea of "the other" and a lack of human ability to peacefully co-exist with those who are different than us, the human bitch-queen Ingrith (Michelle Pfeiffer-going for it) and her human empire are out to take over the Moors so they can open some fish farms, extract resources, run a few creaky pipelines through forest and institute a church-sanctioned cultural genocide program on all the Indigenous creatures. (Oops, got a bit heavy into the subtext there, that's not actually her stated plan...yet.)

To complicate things, Aurora is in love with the human prince, and while half the fairies are all banking that this love will save their lands, the other half are calling for bloody rebellion. You can guess which way Disney and Maleficent end up going.

Less violent than Maleficent 2, the animated The Addams Family movie is also playing at the Village 8 this week. Decent for young kids (they will literally watch anything), this one pushes the classic "be yourself" message right off the hop, but with a NIMBY plotline (legit: the main conflict is that those kooky Addams are bad for neighbouring property values).

It's not going to blow your Halloween socks off, that's for sure.