A few weeks ago during our Speaker Series on journalism in Whistler, technical difficulties unfortunately prevented a question being asked about a fire that destroyed the production office of The Whistler Question in Function Junction in 1991.
Apr 17, 2021 10:00 AM By: Allyn Pringle 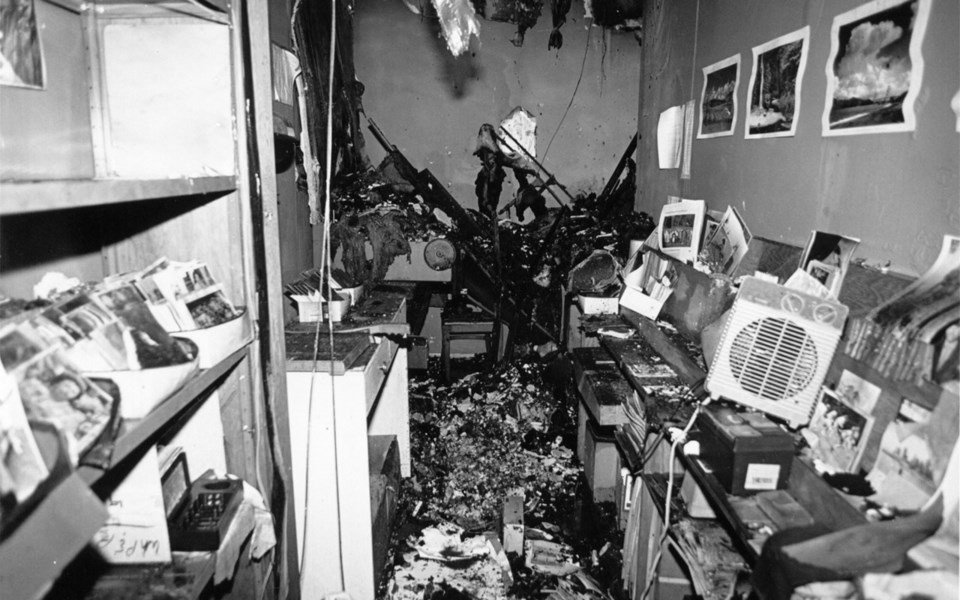 Years of photo negatives were lost when the building housing The Question caught fire in 1991. This snapshot shows the production space after the staff was let back in. Whistler Question Collection, 1991

A few weeks ago during our Speaker Series on journalism in Whistler, technical difficulties unfortunately prevented a question being asked about a fire that destroyed the production office of The Whistler Question in Function Junction in 1991. As we weren’t able to learn more about the fire from the knowledgeable people at the speaker event, both presenting and in the audience, we thought we’d start by taking a quick look at what the Question had to say about it.

The fire was actually one of two large fires in Whistler on Friday, Jan. 18, 1991. In Rainbow, the building housing Rainbow Rentals, Rainbow Paint and Supply, Whistler Woodheat, Whistler Welding, Allan May Project Management and the truck division of Budget Rent-A-Car also had a fire. As there were no hydrants in the area and the building contained tanks of propane, oxygen and acetylene, as well as cans of oil-based paints and industrial solvents, the decision was made that it was too dangerous for firefighters to go into the building. Instead, the highway was closed and the building was allowed to burn.

In Function Junction, at about 2:30 a.m., Kevin Swanlund was the only employee in the building that housed Yurrop Trading, Mountain Crests, the kitchen of The Gourmet, Little Mountain Bakery, and the Question production office when he noticed a fire. Swanlund attempted to put out the fire with an extinguisher but it kept coming back stronger. His actions alerted Carrie Waller and her daughter Amanda, who lived in the apartment upstairs, to the fire. The pair found the stairwell blocked but were able to use a ladder to climb down from the balcony.

Fire Chief Tony Evans described the fire as “a tough one to fight.” A fire hydrant on the property was not connected to the municipal water system and had reportedly frozen, though luckily there were municipal hydrants nearby. The fire department did not confirm a cause of the fire, but were able to say that it appeared to have started near the building’s electrical panel.

Most of the businesses affected already had plans to reopen by the next week. Jan Holmberg, who owned the building and co-owned Yurrop Trading and Mountain Crests, told the Question that Mountain Crests had already located an embroidery machine in Seattle and rented space in another building and would soon be at half their usual production. Rick and Doris Matthews, the co-owners of The Gourmet, had begun cooking at home and in another kitchen while setting up in another Function Junction building, though they expected that for the next month they would be able to produce only about half of their “signature products.” Luckily for The Gourmet, most of their kitchen equipment was saved.

The Question production office was not burned, but was heavily damaged by smoke and water.  The Question lost computers, a laser printer, a photocopier, darkroom equipment, and five years worth of irreplaceable photographs. The paper was able to set up a temporary office in the Blackcomb Ski Club cabin and, thanks to the help of Rick Clare, Whistler Printing and the Blackcomb Lodge, the Question was able to stick to its normal publishing schedule.

The fires of Jan. 18, 1991 affected 11 businesses in Whistler in Rainbow and Function Junction, though most were able to reopen.

Firefighters were able to save a collection of negatives from 1978 to 1985 from the fire. Thanks to Question photographer Brian Smith, these negatives were restored and are now housed in the archives where the Whistler Question Collection is an invaluable resource that is used almost daily at the Whistler Museum. The Whistler Question Collection now includes photographs of many different facets of life in the Whistler area from 1978 to 1986 and from 1991 to 1996. Unfortunately, due to the photographs lost in the fire the years between 1986 and 1991 are not as well represented.