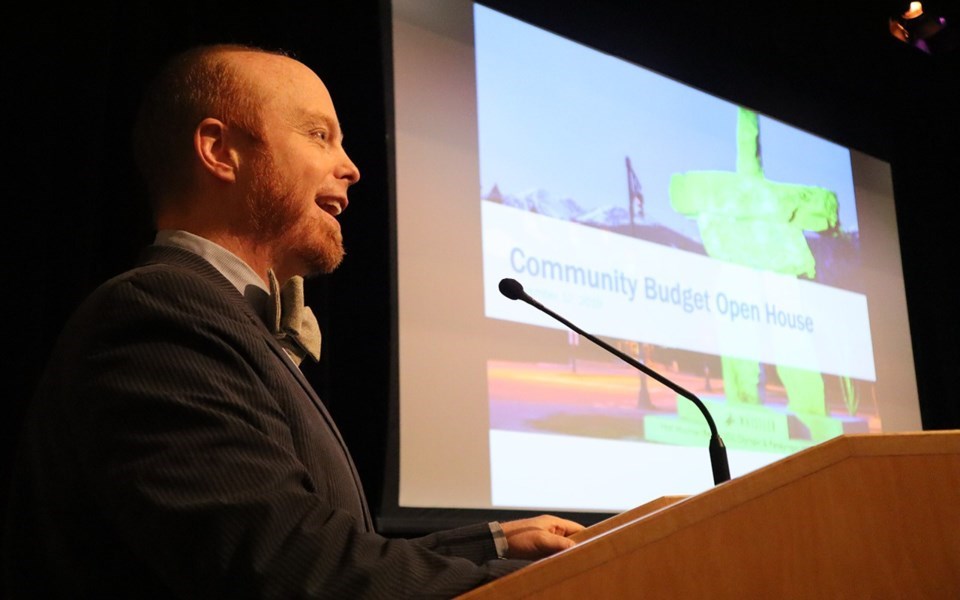 Whistlerites can expect higher tax increases in the years to come as the municipality looks to restore its reserves post-COVID. Pictured is Mayor Jack Crompton at the 2019 budget open house. File photo by Braden Dupuis

If doing a municipal budget once a year is an onerous task, try doing it three times.

That was the job awarded to Whistler’s director of finance Carlee Price in 2020, as COVID-19 forced the municipality back to the drawing board on two different occasions.

“Two amendments to the operating budget in a year is not typical, and it does essentially triple the amount of budgeting work that’s required of the team as a whole,” said director of finance Carlee Price, at the Jan. 5 council meeting.

With so much turmoil, the third-quarter financial update presented at the first council meeting of the new year, on Jan. 5, is based not on the original amounts budgeted at the outset of 2020, but the twice-amended amounts, Price explained.

At the end of the third quarter of 2020, the Resort Municipality of Whistler’s overall operating revenues were at 93 per cent, and expenditures 73 per cent of their amended, annual budgeted amounts, Price said, compared to 92 per cent and 72 per cent, respectively, at the same point in 2019.

As of Sept. 30, actual net project expenditures were 42.3 per cent of the total budgeted for the year, but that’s not out of the ordinary, Price said.

“This has to do primarily with ongoing declines in the interest rate environment,” Price said.

With no further declines in interest rates expected heading into 2021, the numbers should stabilize going forward, she added.

Council also gave first three readings to the 2021-2025 five-year financial plan bylaw on Jan. 5, which sets out the municipality’s proposed revenue sources and project spending for the next five years.

The 2021 tax rate bylaws are scheduled to come to council in April.

On Dec. 15, council reversed course on a planned 4.89-per-cent tax increase, opting instead for an increase of 1.08 per cent in 2021—but the move will have significant tax implications down the line.

The 1.08-per-cent requisition was achieved in part by lowering draws on municipal reserves, which are used to fund infrastructure that continues to age and will eventually need to be replaced.

Councillor Cathy Jewett commended the work of Price and her team in whittling the 2021 tax increase down to 1.08 per cent, but noted her concern with the years ahead.

“Sooner or later we do have to rebuild these reserves, and there will be an increase in our taxes,” Jewett said.

“Thank you very much for your hard work, and as a new taxpayer, I’m going to get ready for my bill in 2022, knowing that it’s going to be a bit bigger.”