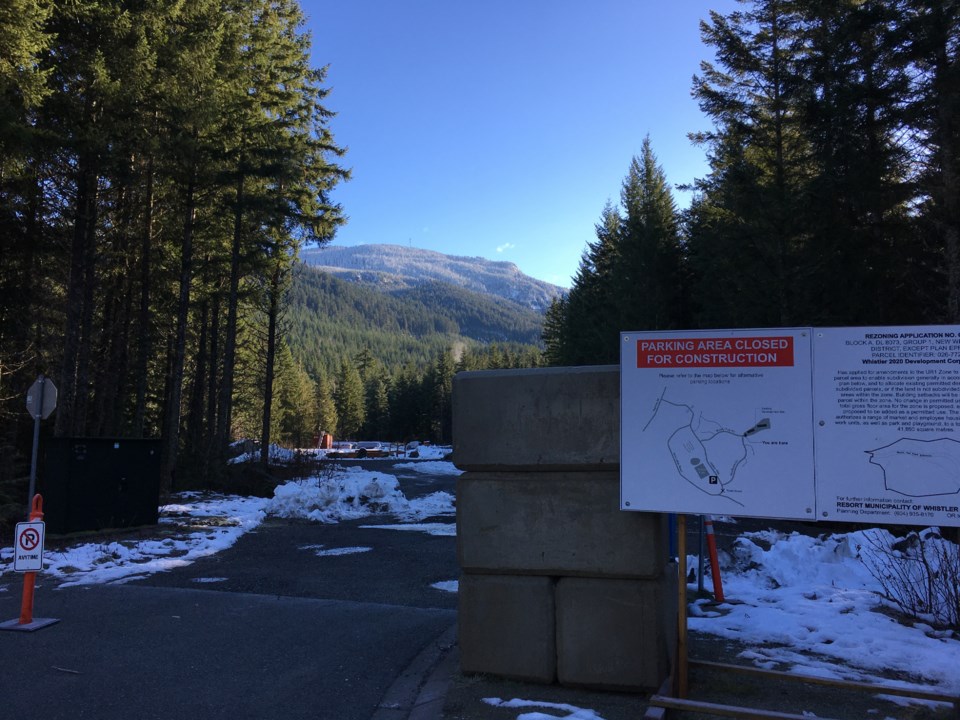 The Resort Municipality of Whistler is investing $10 million to advance resident housing on Parcel A in Cheakamus Crossing—with all the risks and unknowns that entails. Photo by Braden Dupuis.

The Resort Municipality of Whistler is moving forward with a $10-million investment in resident housing next year, but the spend isn’t without risks—and a few unknowns as well.

On Nov. 17, council heard an update on plans for Cheakamus Crossing’s Phase 2, which includes a total of 100 units in two buildings on what’s known as Parcel A, with occupancy targeted for 2022.

A $10 million line item included in Whistler’s 2021 budget will fund the beginning of the project, and will be viewed as a line of credit to be used only as needed, according to Eric Martin, board member of the Whistler 2020 Development Corp (WDC).

At the Dec. 1 council meeting, chief administrative officer Virginia Cullen and director of finance Carlee Price detailed some of the nuances involved with the loan.

The WDC’s project plan, included in the Dec. 1 agenda, has developed six financing scenarios for Parcel A development, with final decisions yet to be made (pending the outcome of BC Housing grant applications).

The scenarios consider a mix of rental and ownership options between the two buildings, depending on the outcomes of the grants, as well as how proceeds from the sale of 18 market lots on Parcel D3 will be used.

After servicing costs are accounted for, the WDC is hoping to bring in “at least $15 to $17 million, net, in cash,” Martin said of Parcel D3, adding that the WDC will pre-sell the lots to ensure significant deposits, “so before we spend the money on infrastructure we know we’ve got commitments.”

The total cost to develop Parcel A is estimated at about $38 million.

While costs included in the WDC’s plan are estimates, “there are good comparables with recent buildings that have been built by the Whistler Housing Authority,” Cullen said. “So these numbers have a higher level of certainty with them than perhaps they would if we hadn't had these recently built projects.”

One major unknown is what 2021 real estate market conditions will look like.

“COVID just introduces more uncertainty to real estate trends and we just need to be cognizant of this.”

The loan is necessary as WDC—a wholly owned subsidiary of the Resort Municipality of Whistler—does not have sufficient assets to secure third-party lending, Price said.

“They do believe that rezoning will change that, because that will increase the value of the lands in question,” she said.

“So at that point WDC anticipates that it will be able to borrow from other traditional lenders, and that this would then become a factor in the second quarter and beyond in 2021.”

As the WDC can’t offer security at this time, the RMOW won’t be able to compel repayment, Price added.

As for the mechanics of the loan, there are two possible approaches: Either the RMOW takes a short-term loan from the Municipal Finance Authority, or pulls from its reserves.

There are pluses and minuses to both approaches, Price said.

“In the case of an MFA loan, that loan creates a claim on all of the RMOW assets, which is of course a risk to the organization,” she said.

“In the case of reserve investment liquidation, it results in reduced interest income to the RMOW, which would be offset by an income accrual against the WDC, but that again exposes the RMOW to the risk … [that] the money may not ultimately be repaid.”

In the end, council voted unanimously to support the $10-million loan, and directed staff to return at an upcoming council meeting for further consideration of the agreement details.

“The caution and the depth of analysis in this report is welcome,” said Mayor Jack Crompton.

“My hope, and I think the expectation of the WDC, is that the money will be returned to the municipality. I will work hard to see that happen, and I know the WDC will as well.”

But it’s no small decision, the mayor added.

“In fact, it's a huge investment of municipal land and capital,” he said.

“And for that reason, I am grateful that we took the time and did the in-depth analysis that we did, and I’m grateful that staff have spent the time and the energy and the thought delivering what we have in front of us today. I feel confident in this decision.”