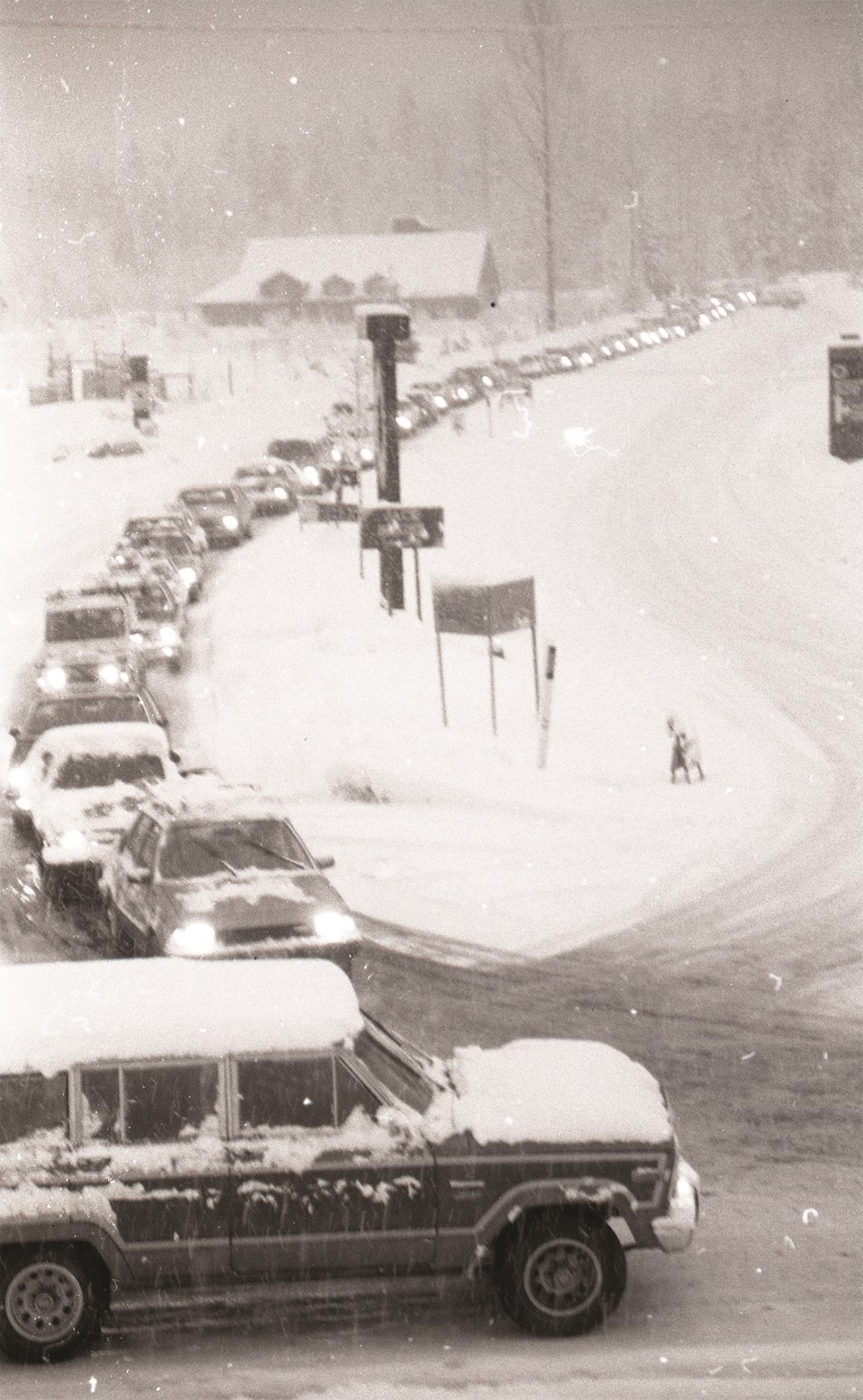 Traffic jams caused by snow and crowds were not easily fixed when Blackcomb Mountain began to get busy in the 1980s and they were a common sight for years to come. Whistler Question Collection, 1984

As many people who have worked at small or relatively new organizations (and even some larger, more established ones) know, it is not unusual for one’s job to include many duties that would not necessarily be found in the job description. Still, you generally wouldn’t expect to see a company’s president and administrative manager, along with another organization’s general manager, out directing traffic in the dark. That, however, is exactly what happened in 1980 when Blackcomb Mountain experienced its first traffic jam.

According to Lorne Borgal, Blackcomb’s administrative manager, the issue occurred when Blackcomb had one of its first “big weekend days.” Skiers spent the day on the snow, had a great time, and then all tried to leave. While in his office at Base II about 4 p.m., Borgal realized that it had been a while since a car had left the parking lot. They were all lined up, idling and waiting to go, but traffic was not moving.

Borgal, Blackcomb’s president Hugh Smythe, and Al Raine (then the general manager of the Whistler Resort Association) jumped in a pickup truck and drove the wrong way down Blackcomb Way to find the source of the gridlock. Unfortunately, some of the cars saw this and followed them down, creating two lines of cars and no way back up the road.

The problem, they discovered, was that the northbound traffic on the highway from the Whistler Mountain gondola base was not allowing any car to leave the village area. At the time, there was no traffic light and only one entrance onto the highway, controlled by a stop sign. It was also dark and snowing.

Smythe, Raine and Borgal began directing traffic. As Borgal recalled: “We had all the parking lots in the valley merging onto the one little road out … There was no flashing lights or anything, there was just the little glow there, [...] and I was the idiot who stood out on the road. You’re out in the road, in the dark, flashing a little flashlight, trying to get these guys to stop to get some people out of the valley.”The fact that gondola traffic had never had to stop before didn’t make the situation any easier.

At one point, the local RCMP officer did come by, putting on his lights and asking what was going on. When told about the problem, however, he decided that the Blackcomb staff had it in hand and left. Directing traffic became another of the many “amazing things to do” that marked the early operations of Blackcomb Mountain.

Though this season has certainly been different, it has not been uncommon in past years to see lines of cars backed up through the village at the end of a good snow day, much as they would have been 40 years ago. Directing traffic, however, is included in job descriptions now and those who do it get proper lights and signage.

Next week we’ll be taking another look at mountain employees (temporarily) taking on duties outside their given roles, this time on Whistler Mountain.