MAXED OUT: Here’s to skiing Whistler until I can’t… 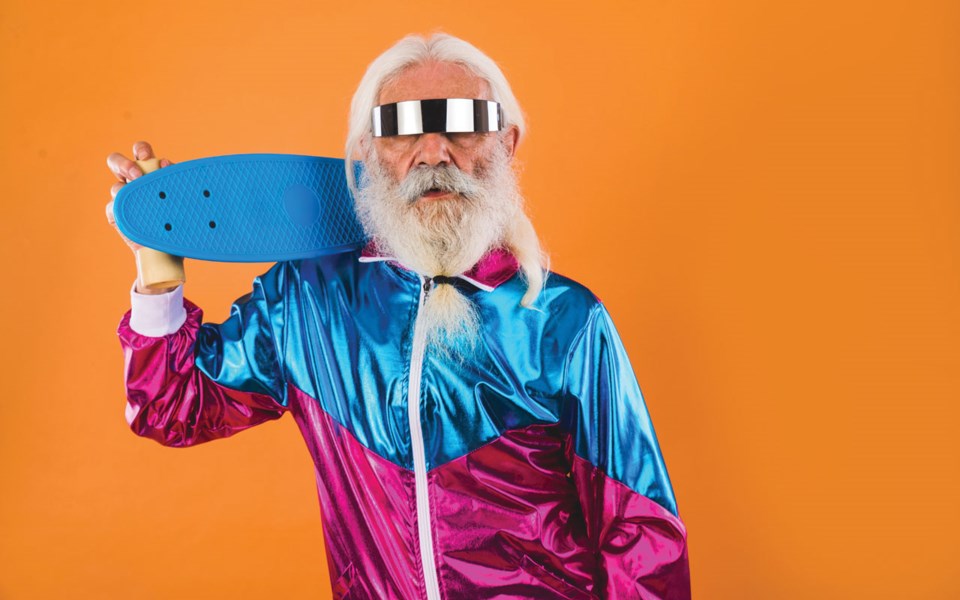 Max talks about what aging in place looks like in a ski resort filled with youths, then, like the maverick he is decides he’s skiing here until he can’t.www.gettyimages.ca

“Age is not a particularly interesting subject. Anyone can get old. All you have to do is live long enough.”

“The older I grow, the more I distrust the familiar doctrine that age brings wisdom.”

“I’m so old I won’t even buy green bananas.”

Everyone wants to live long; no one wants to get old. Go figure. Getting old sucks. That it’s way better than the alternative is cold comfort because, let’s face it, the alternative is still a pretty abstract concept until it sneaks up, taps us on the shoulder and whispers in its chilly voice, “Time’s up, turkey.”

It’s as pointless to obsess about death as it is to bitch about long lift lines on weekends—yes, that was a bitch about long lift lines on weekends. Death’s like your last final exam and like all the other exams in your life, giving it any thought until the last possible moment serves no useful purpose whatsoever; you’ll forget everything when the time comes and you’ll just spend needless hours tormenting yourself. The only people who obsess about death are those same keeners who never understood that deadlines were something to make, not something to beat. Serves ‘em right.

At the moment of death, the moment she plunged her hypodermic shiv into the nerve of the ailing tooth and killed it dead, there was, just like they say, a bright light at the end of a long tunnel and I could see my dear departed tooth swirling the bowl. I also levitated out of her chair, such was the exquisite moment of pain.

I went home, had a wake for my tooth, got rip-roarin’ drunk, realized my dead tooth couldn’t really enjoy the party, understood grieving is for the living, not for the dead, got philosophical, passed out and paid a big price the next day when I had to get on with life with a large number of brain cells having joined my molar in the Great Hereafter. Can I get an Amen?

But aging and death obviously aren’t the same thing. They’re more akin to foreplay and climax which, while being more or less joined at the hips, aren’t the same thing either. The main difference is getting old is definitely one of those things even guys don’t want to rush through.

So far, the indignities of aging seem to be manageable. I’ve hardly given a second thought to the other murdered teeth in my mouth. I can deal with the reading glasses, even though they seem inexorably to get stronger; I can pretend the lighter hairs in my beard are actually, finally blond coming through; I can fool myself into thinking everyone who skis feels like their knees are about to give birth to aliens when they’re finished.

And I can even live with the dread of what’s lurking just around the corner which, based solely on advertising, seems to be a life incontinence, flatulence, erectile dysfunction, high cholesterol, higher blood pressure, acid reflux, and, of course, a generally frustrating battle with chronic constipation punctuated only by bouts of raging diarrhea, all of which work in concert, conspiring to turn me into the junkie I spent so much of my earlier life trying to avoid becoming.

Like Bernard Baruch, I always considered old age as, at a minimum, 15 years older than I am. There are two flaws in that. Relativity is one. If I were living in a retirement community instead of eternally youthful Whistler, I’d be considered the young hoodlum the rest of my neighbours would watch with suspicion. The other flaw is most people 15 years older than I am are dead.

But living in Whistler, I’m definitely the brother who was left on Earth in Einstein’s parable. I age every year while my brother, floating through space at the speed of light, ages hardly at all. Except, like a death of a thousand cuts, my theoretical brother is actually the people I meet here and I don’t have to wait a couple of decades to witness the startling results.

I grow demonstrably older every single year. Yet, in an age-defying miracle, those all around me remain, on average, in their mid-20s.

There seem to be, between Canada and, in non-pandemic years, Australia and the U.K., an endless supply of 22-year-old, fresh-faced suckers. If there weren’t, Whistler would have to rethink its whole business model.

When I moved here, it wasn’t so bad. I couldn’t exactly fool myself into thinking I blended into the greater population but I knew no one could imagine I was as old as I was given my lack of wisdom.

So here I am, caught in what I like to think of as the awkward years. Older but not mature.

To be honest, I have a problem with the whole mature thing. I don’t feel mature. I’m not sure I ever will. But I fully expect to get older. And crankier. And proud of it. I fully intend to become a Geezer, and as God is my witness, I’ll wring the full measure of Geezerness out of my experience.

That having been said, I fully expect to age in place, whatever that means. Being a skier, I’m hanging my hopes on what I like to call the Continuum of Care Ski Resort Model.

Under the model, people would start their ski resort lives out at a place like Whistler, or Revelstoke, where only youth, vitality and mindless cliff jumping are valued. In Phase II, The Middle Years, people realizing they can’t possibly afford to raise a family in Whistler would move to Fernie or Rossland or maybe close to Silver Star, places where they could afford homes.

And finally, Phase IV, The Golden Years. Years when gentle and rolling replace steep and deep as desirable terrain features. When close, full-service hospitals hold more appeal than full-on après bars. In other words… the Sun Peaks Years. Gee, maybe we roll the name back to Tod Mountain, or Sunset Peaks.

Or maybe, if I’m lucky, I’ll keep finding those few who are 15 years older here, who still ski hard and will until they/we shuffle off to whatever follows.