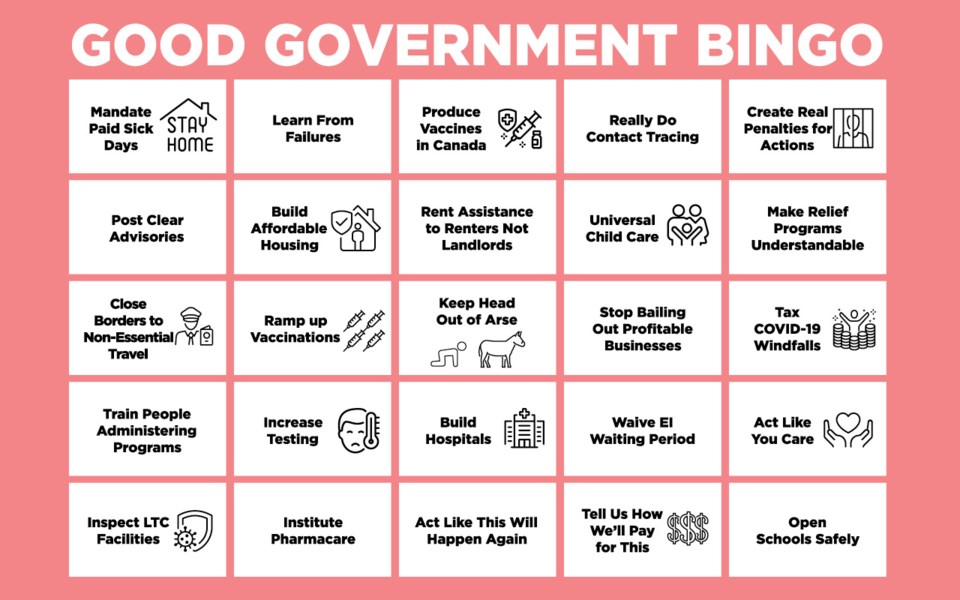 After the British Columbia government came up with Self-Care Bingo, Max retorts with a version for good government.Image by Jon Parris

Hey boys and girls, let’s have fun this week. You remember fun, don’t you? I know, you might not feel like you’ve had a lot of fun lately—OK, for the last year—but you’ve probably had some fun, haven’t you? I mean fun isn’t like dinner parties, which you probably haven’t had at all in the past year, at least without concern or guilt or contracting COVID-19. But skiing is fun. Right? At least after you finally snake through the massive lineups at the base of the mountains if your reality is skiing on weekends.

Before we have fun, I’d just like to say some kind words about the people who work in government. Seriously. Not a lot of kind words but give me a couple of minutes and I’ll come up with some.

As much fun as it is to disrespect people who work in government, especially the none-too-aptly-named civil servants, I believe most of them enter government to do good. Of course, I’m reminded of the seminal academic studies of students entering medical school. A “desire to help,” to “cure and prevent diseases,” and to “interact with people” were prime motivations of new med school students. But somewhere along the way, while those things remained important, if latent, the laser-like focus on disease and trauma tended to reduce the humanity of those key motivations and simultaneously reduce humans to whatever boo-boo was being taken care of.

This explains why my orthopaedic surgeon always referred to me as The Knee, as opposed to Max. I’m certain you have had or know about similar experiences.

It also helps explain the level of service many of us experience when working with, or as it often feels, interrupting government employees.

Being in the public eye, though, when they screw up, their blunders seem so much more, how shall I put this, bone-headed? Unbelievably dumb? Tone deaf as an alley cat in heat?

Case in point: COVID-19. By any measure, the current pandemic has taken a terrible toll. Since the first case was discovered a year ago, there have been almost 850,000 cases in Canada. More than 21,000 people have died in this country and they’re still dropping by 40-plus people every day. Canada being a small big country, our numbers pale compared to global figures. They ring in at more than 112 million cases and almost 2.5 million deaths.

More to the point, many of us—not me of course, I live in denial—are walking wounded. Depressed, angry, frustrated, hopeful, at the end of our rope, unable to find our rope, and generally weary; we just want this to end. We want to go out, sit down, order a heavenly cheeseburger and a draft IPA and eat it without getting any on our masks.

Governments at all levels have tried to make things better. Seriously. But someone we will probably never know the name(s) of in the government of British Columbia tried a little too hard last week. I’m sure he/she/they thought his/her/their efforts would be helpful but, really? Self-Care Bingo? Bingo? Really?

It appeared on Twitter on Friday, which is why I didn’t see it until after the weekend. Styled as a Bingo card, it urged people to take steps to “help manage some stress and anxiety.” Choose your own steps but complete a row—across, down or diagonal... just like Bingo!

Given he/she/they were trying to get this little task off their to-do list by the weekend, we might cut them some slack for recommending, for example, “Made a blanket fort;” “Took a nap;” “Cleaned something;” and other activities sure to lift your spirits or at least remind you to turn the gas off in your oven before sticking your head in.

The money shot, the centre of the Bingo card, was, “Cried. Let it out.” I believe we can all breathe easier he/she/they didn’t specify exactly what “it” was we were letting out.

I have to admit, though, making games out of mental health in the midst of a pandemic seems like an idea. Not a good idea, mind you. Certainly not the kind of idea I feel good about helping pay someone’s substantial salary and indexed-for-life pension for, but an idea.

Monopoly™ might have been a good model. But in the pandemic version, you don’t try to accumulate wealth and property so much as you try to keep your business open and avoid personal bankruptcy. Community Chest might give you more CERB or advance you to a higher priority for vaccination. Wouldn’t that lift your spirits?

Clue™ might be fun, but I think it would be more aimed at making a game out of contact tracing than mental health. Still, just being able to trace back to the source of the devil who gave you COVID-19—it was the bartender with the droopy mask in the library lounge who did it—might be a boon to your mental health.

Candy Land™ as a format has possibilities if we switch out gumdrops and candy canes for artisanal bread and bagels and replace Mr. Mint and Princess Frostine with Uncle Sourdough and Ms. Pretzel, the contortionist.

And instead of conquering the world with armies and backstabbing allies with false diplomacy, Risk™ would be reworked to recognize the devastating power of viruses and weaponized biochemical warfare. Not sure how that would make us feel better, but I’m pretty certain it would appeal to the conspiracy theorists out there.

But for now, I’ll settle for Good Government Bingo. Good luck getting any of these, let alone a row or diagonal.