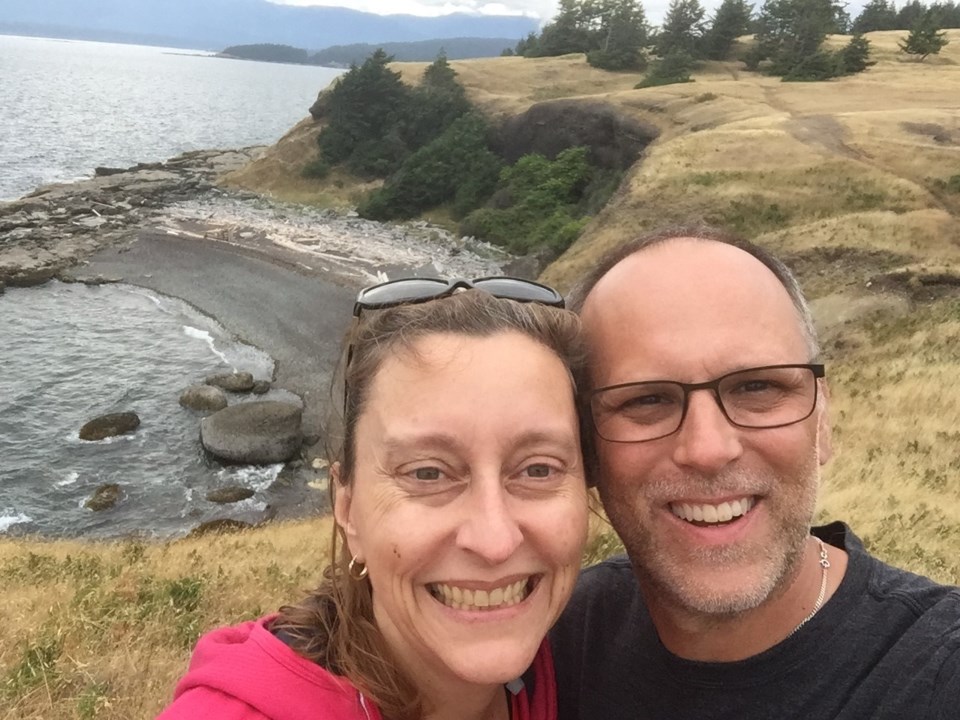 Whistler Citizen of the Year Dave Clark, with his wife Wendy. PHOTO SUBMITTED

While he’s no stranger to public speaking, the ever-humble Dave Clark isn’t the type to bask in his accolades. So when this year’s Whistler Citizen of the Year learned that the annual Excellence Awards would be held entirely online in 2020, the news was a relief.

“I generally don’t like getting in front of a group of people and talking about how good I am, so to sit on the couch in my sweats and watch it with my family, that really hit the nail on the head in terms of my comfort zone,” Clark said with a laugh.

The long-time volunteer, fundraiser and youth sports coach took home Whistler’s longest running award in a digital ceremony held by the Whistler Chamber of Commerce on Wednesday, Sept. 16. Clark takes home the honour after being the odd man out at the 2019 awards as the third nominee in a year when two individuals shared Citizen of the Year: Pat Montani and Keith Reynolds.

“I feel that I won just by being in that top three and surrounded by that company. It’s such a huge honour,” Clark said, adding that being named 2020’s Citizen of the Year was especially meaningful “in a year when the community came together to do amazing things.”

Founder of the Whistler Half Marathon and long-time baseball and biathlon coach, Clark has also spearheaded the fight against both children’s cancer and colitis, raising roughly $690,000 combined over the years for the pair of causes both through the Whistler Friends Community Health and Welfare Society and his annual Balding for Dollars event.

He also serves on a number of community committees, and helped launch the Sea to Sky Healing Project earlier this year, a website curated by seven notable locals to offer much-needed tools and resources to manage mental and emotional well-being. Find it at seatoskyhealingproject.com.

“Dave Clark is such a staple person of this community,” said Whistler Chamber CEO Melissa Pace. “He’s done so much work at elevating the spirit of our community and volunteers his time in helping different organizations in the community. His energy and his constant positive attitude is certainly something that is infectious.”

Forced to go online due to COVID, the Whistler Excellence Awards were held digitally this week after April’s in-person event was postponed at the onset of the pandemic. Pace said the online ceremony, which clocks in under 45 minutes, “was better than I think any of us had expected.

“We were supposed to have this event in April and we really struggled back and forth. Does the community really want to celebrate? Of course, nobody did,” she added. “Everyone was running around trying to figure out what COVID-19 was all about and what was going to happen to the community. And now that we are in a new now, it’s the end of the summer season and we’ve got a bit of a lull coming into the fall, it’s a great time to pause and reflect not just on these incredibly businesses that were profiled, but everybody. Everyone needed that boost.”

Sushi Village owner Naoko Homma was named Business Person of the Year, no doubt a welcome honour in a year when the restaurant—along with fellow Sundial establishment Black’s Pub and Mexican Corner—are ensnared in a strata battle with developer Concord Pacific over the potential sale of their properties for “pennies on the dollar.”

Whistler Blackcomb’s Court Larabee, an First Nations activist and director of the Indigenous Life Sport Academy, won the Rising Star award, given to a local businessperson under 39 who has made an impact beyond their years.

Cassandra Spence, Pearl's safe home and homeless prevention coordinator for the Howe Sound Women's Centre and Nikki Best, founder of Snowberry Consulting, were the other nominees.

Rounding out the other awards, Snowboard Addiction was named the Innovative Business of the Year, Revolution Power Sports won the Whistler Experience Service Small Business Award, while the Whistler Public Library won the service award for large business.

ecologyst took home the Sustainability in Action award, while the Fairmont Chateau Whistler was named the Champion of the Arts by Arts Whistler, which, for the first year included businesses and organizations as nominees instead of individuals.

To watch the awards, visit whistlerchamber.com/training-and-events/whistler-excellence-awards.